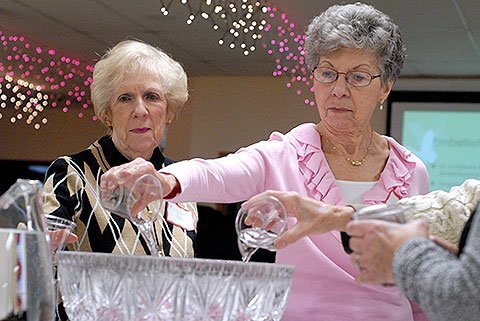 ROCHESTER — Although they appeared to be holding ordinary bottles of water, participants in a conference on spirituality and aging were encouraged to see the liquid they held as a symbol of wisdom.

They then pooled their wisdom by pouring some of the water into their neighbors’ glasses.

That was one way speakers during the conference "Drawing Water from the Well: To Quench Our Thirst for Spiritual Growth in Later Life" Nov. 3 at Peace of Christ Parish at St. John the Evangelist Church drew out the collective wisdom of the group. As part of the conference, participants were encouraged to share times of spiritual growth and how their spirituality was important to them as they matured.

The event was presented by a new group called The Spirituality of Aging Coalition, which is made up of local aging and spirituality experts Patrick Fox, Richard McCorry, Tim McGowan, Peg Morris and Rosalie Muschal-Reinhardt. Fox said the group first began to coalesce after he ran into Muschal-Reinhardt and Morris during an event and found that, like him, they were focused on issues of spirituality and aging. They began to plan a group that could work together to promote spiritual growth for seniors.

Each of the participants in the Spirituality and Aging Coalition hails from a background of ministry with the aging, said Fox, who worked for 40 years in faith formation and youth ministry in parishes and at the diocesan Pastoral Center, retiring from parish ministry two years ago. He recently completed a professional certificate in spiritual gerontology through the Senior Adult Ministry/Johnson Institute in St. Louis and runs Parish Resource Services, which provides assistance for maturing adults.

"We want to get the message out that spirituality is an essential element of healthy living and a long life," said Fox, who noted that churches need to be conscious of maturing adults’ spiritual needs and growth.

Although the coalition is aimed at increasing seniors’ spirituality, the goal is to increase their connection with their religious practices as well, Fox said.

"We are convinced that in every parish there’s a treasure that’s waiting to be discovered," said Muschal-Reinhardt, a religious-studies educator for more than 50 years who has a master’s degree in divinity. In 2001 she also was certified a Sage-ing Leader with the Sage-ing Guild, an institute that promotes spiritual development as part of the process of aging.

"There’s so much growth that is in our later years, and we don’t think about that spiritual growth as well," said Morris, who worked at Highland Hospital for three decades, has a master’s degree in gerontology and in 2006 became a certified Sage-ing Leader with the Sage-ing Guild.

McCorry, who has a doctorate of ministry degree in transformative leadership and is the author of Dancing with Change: A Spiritual Response to Changes in the Church, noted that change is a constant in our lives, including when we age. People often resist change because of a fear of the unknown and a psychological need for predictability and stability.

"That change will call upon us to do new things that we are not sure that we are capable of doing," McCorry said.

Both those who are resistant to change and those who embrace it are needed in our lives if we want to achieve growth, McCorry said.

"People who resist change make the rest of us prove that it is necessary," he said. "People who are praying for change challenge us to grow and move and not stay stagnant."

Conference participant Pat Mueller of Webster, a parishioner of Holy Trinity Church, said opportunities can come from embracing change. She cited an example from her own life: She became a widow six years ago, but instead of withdrawing from the community after her loss, she began to volunteer at Hope House in Webster, which provides assistance for people in need.

"So many people, as they age, they don’t reach out," Mueller said. "They stay insular, and they are missing so much."