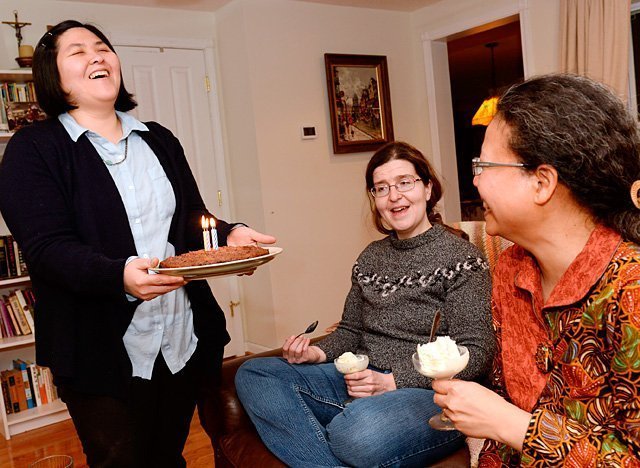 Yeny Hudisho (left) brings out a birthday cake for Jolanda Pandin (right) as Lori Lepak (center) looks on during a Feb. 13 meeting of St. Cyprian’s League, a group for Catholic young professionals in the Ithaca area.

For Yeny Hudiono, connecting with Ithaca-area residents who share both her religious and professional interests isn’t always easy.

"Since most Catholic communities around here cater to graduate students and family, it has been challenging to find friends who are around a similar age, working and Catholic," explained Hudiono, a parishioner at Ithaca’s St. Catherine of Siena and a research scientist for Pall Corp. in Cortland.

However, Hudiono appears to be finding several kindred spirits, thanks to the launching of St. Cyprian’s League in early 2014. The social and spiritual group caters to Catholic young professionals in Tompkins County; in fact, charter members chose the name of St. Cyprian — who was a third century bishop in North Africa — because "Cyprian" loosely forms the acronym "Catholic Young Professionals of Ithaca and Nearby."

Members typically meet once per month — most often on the second Friday — for dining and faith-sharing, according to Jolanda Pandin, who coordinates many of the group’s get-togethers along with her husband, Matt Connolly. She noted that a special dinner will take place on Easter Sunday, April 5, at 4 p.m. (Contact Pandin at jmpandin@yahoo.com for the location.)

"We try to provide a variety of both social and spiritual activities," Pandin said, noting that events in recent months have included playing board games; having a potluck supper; picking fruit at a local farm; and praying the rosary and Liturgy of the Hours. St. Cyprian’s League meets frequently at St. Catherine of Siena’s church hall, although the meeting on Feb. 13 took place at the Pandin/Connolly home and featured a dinner of Indonesian dishes, with free-will donations being accepted to benefit Birthright.

Another highlight of that meeting was a presentation by Jesuit Father Gerry McKeon, who ministers at Cornell University and Ithaca College. Father McKeon opened his talk on the importance of recognizing the divine that surrounds us, then discussed "freedom from attachments and freedom for service, the idea of greed vs. generosity, by sharing some personal encounters with teenagers in Haiti who were in dire conditions yet very generous," Pandin said. Father McKeon also offered reflections on love from Pope Benedict and Pope Francis, she noted.

This event took place approximately one year after St. Cyprian’s League was formally launched. The group’s origins can be traced back to a young-adult meeting in late 2013 at St. Catherine of Siena, after which some attendees had concluded that "neither young-adult groups, nor a graduate-student group, nor a young-family group met their social and religious needs as professionals," said Pandin, a senior lecturer in the Department of Asian Studies at Cornell University. She and her husband attend Cornell Catholic Community and All Saints Parish in Lansing.

Hudiono, who has been involved with St. Cyprian’s League since its inception, said the group’s main draws are "fellowship and friendship."

"All the regular members bond well, yet still hope to get to know more members from different professional fields for forming a wider and better faith-sharing community," Pandin added.

Pandin said St. Cyprian’s League originally aimed to draw single and married adults in their early 20s through early 40s, although participants have thus fallen into a slightly higher age range. The organization welcomes new members, and Pandin noted that area faith communities have been helpful by running bulletin notices about upcoming meetings.

Anybody seeking more information about St. Cyprian’s League can contact Pandin or access the group’s page on www.meetup.com.