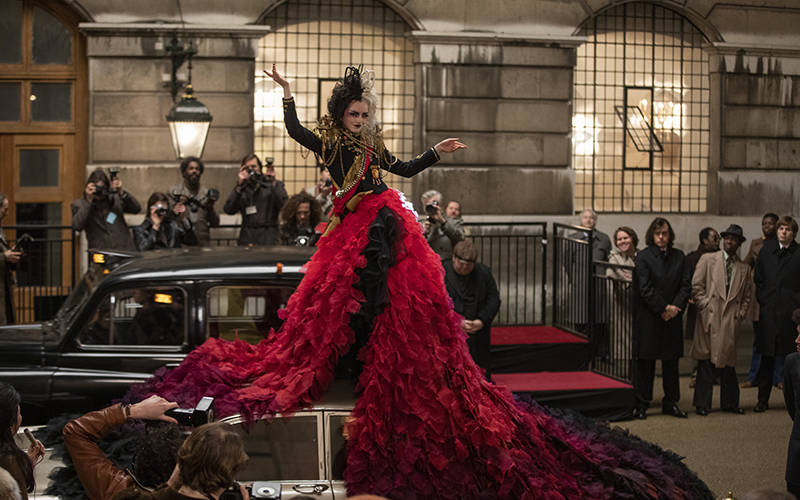 Emma Stone stars in a scene from the movie "Cruella." The Catholic News Service classification is A-III -- adults. The Motion Picture Association rating is PG-13 -- parents strongly cautioned. Some material may be inappropriate for children under 13.  (CNS photo by Laurie Sparham/Disney Enterprises, Inc.)

NEW YORK (CNS) — Adults who want nothing more than to watch two gifted actresses camp it up will likely be satisfied with director Craig Gillespie’s glossy romp “Cruella” (Disney). Parents on the lookout for safe family fare, not so much.

In crafting a live-action origin story for the villain of Dodie Smith’s 1956 children’s novel, first seen on screen in the 1961 animated adaptation “101 Dalmatians,” screenwriters Dana Fox and Tony McNamara seem to want to let their ethically schizophrenic protagonist, played by Emma Stone, go over to the dark side yet keep her sympathetic. As a result, the film never finds its moral footing.

An aspiring fashion designer in 1970s London originally called Estella, Stone’s character is thrilled to be taken under the wing of the Baroness (Emma Thompson), the ruthless reigning queen of the rag trade. But plot developments involving an heirloom and a family tragedy lead her to assume the titular persona and work secretly to bring on her mentor’s downfall.

Before her big break, orphaned Estella used to make ends meet by helping Jasper and Horace pick pockets and rob homes. Though this aspect of her story can be sloughed off as belonging to the long cinema tradition of the lighthearted heist, her later drive for revenge is more problematic.

As she works to upstage — and thus undermine — the Baroness, Cruella drifts away from the devotion to the memory of her mother, Catherine (Emily Beecham), and the loyalty to her thieving amigos that were once her trademark personality traits.

Jasper and Horace justly accuse Cruella of giving in to egotism and ingratitude. Yet all the while, there’s a sense that the audience is meant to see her newfound wickedness — which, in reality, only amounts to being tiresome — as somehow fabulous.

Cruella and the Baroness’ race to the bottom does have its moments. Having discovered how to use a taser, for instance, the latter observes, “I could do this all day.” But the occasional humor — like the elegant interiors, costumes and cars more consistently on display — can only carry the picture so far.

As cuddly as a spotted puppy this production is not. Unsuitable for impressionable viewers, it may be mildly diverting for grown-ups who can choose to ignore the unreliable moral compass by which it’s guided — or, rather, set adrift.

The film contains skewed values, including a benign view of homosexuality and cross-dressing, a vengeance theme, some stylized violence and a couple of mild oaths. The Catholic News Service classification is A-III — adults. The Motion Picture Association rating is PG-13 — parents strongly cautioned. Some material may be inappropriate for children under 13.