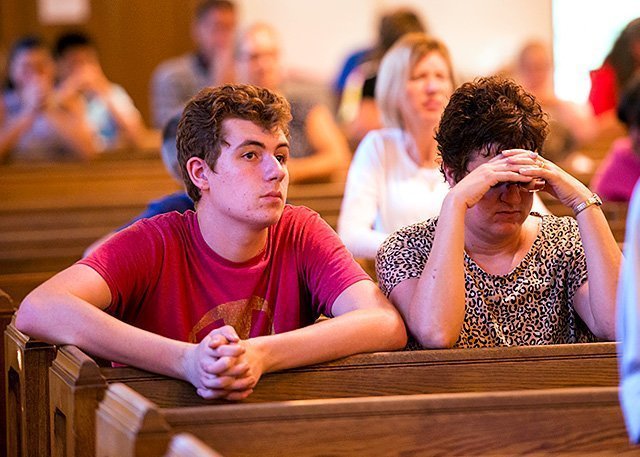 When leaders at St. Patrick Parish in Victor realized the parish’s Mass-attendance rates were declining, they took an unusual step: They added another Mass to its already full slate of three weekend liturgies.

The new addition, which is offered at 5 p.m. each Sunday, hopefully will be attractive to families with children in sports programs or people who frequently travel on the weekends, according to Father Edison Tayag, pastor. The parish’s weekly youth-group meetings will begin immediately after the 5 p.m. Mass ends, and teens hopefully will take active liturgical roles in the Mass, thus strengthening their connection with the Sunday liturgy, Father Tayag added.

"We’re trying to make kids aware that youth ministry is tied to the experience of weekend Mass. For that reason we have teens playing and singing music at the 5 o’clock Mass, and eventually the hope is to train lectors and ushers from among them," he explained.

The new Sunday-evening Mass, which was held for the first time Sept. 11, is the product of the parish’s desire to both meet parishioner’s needs and also boost Mass-attendance rates. Father Tayag began studying the parish’s Mass-attendance figures shortly after he became pastor in June 2015, and it didn’t take long to realize those figures were on the decline. Father Tayag and parish staff and volunteers began asking parishioners what they thought was responsible for this trend. Many parents reported that their children’s weekend athletic activities often prevented them from attending Mass at St. Patrick, which offers Masses at 4:30 p.m. on Saturdays and 8:30 and 10:30 a.m. on Sundays.

"We asked them what we can do, what we can explore," Father Tayag recalled. "One of the suggestions was the additional Sunday-afternoon Mass. From there we asked permission from the bishop, and we basically said we’d like to explore this for a year and see what happens when we promote it and let parishioners know it is available to them." 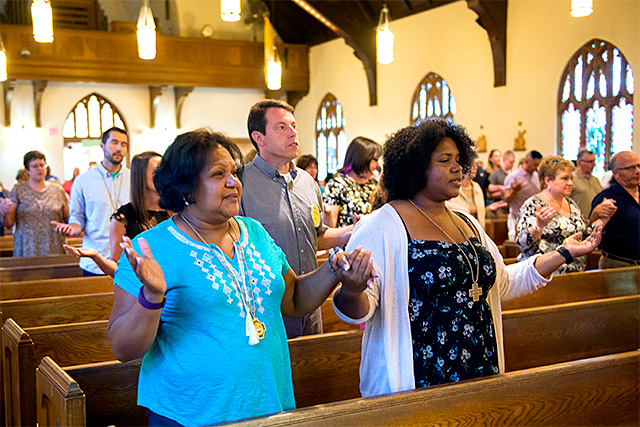 "At the same time hopefully the other Masses that we have will continue seeing a trend of increase," Father Tayag said, noting that parish staff members currently are working to update St. Patrick’s census. "If our census is right, we only have 9 percent of our parishioners at Mass each weekend. That is way below the 25 to 33 percent national average."

Father Tayag and the parish staff will be studying attendance figures from each of the weekend liturgies to see if the 5 p.m. Mass truly is drawing more people to or if it’s just attracting people who previously had attended one of the other Masses. The pastor hopes parishioners will take ownership of the Sunday-evening Mass and not only attend it, but also invite other families to attend it as well.

Parishioner Dave Moore said his family was excited to learn the parish was adding a Sunday evening Mass. His teenaged daughter already has joined the group that sings at the 5 p.m. Mass and attends the youth-group meetings after Mass as well.

"It’s a nice way for our youth to get centered before going on to the youth group," Moore said of attending the Mass.

The availability of a Sunday-evening Mass at St. Patrick will make it easier for Moore and his family to visit his parents, who live an hour away, he added. During previous visits Moore’s family would leave his parents Saturday evening so they could attend Mass at St. Patrick the next morning. Now, however, the Moores will be able to make overnight visits and still have plenty of time to get home for the 5 p.m. Mass, he added.

"Honestly I have been church-hopping because the Mass times really have not worked for us," said Prescott, who often took her family to the 5 p.m. Mass at St. Louis in Pittsford. "Now I don’t have to drive to Pittsford anymore."

St. Patrick parishioner Joyce Richards said her children’s sporting events and work schedules also have kept her from attending Mass at St. Patrick as often as she’d like and she’s grateful for the new Sunday-evening Mass.

"I think 5 o’clock on a Sunday just seems like a perfect time. I think it’s a great way to end the weekend and start the new week," Richards said.

Going to Mass on Sunday evening helps Prescott feel better prepared for the week ahead, she added.