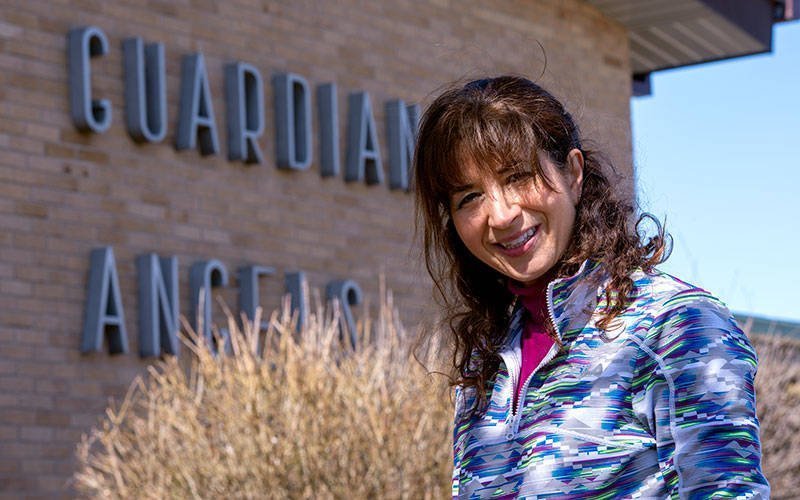 As a longtime personal-fitness trainer, Carol Bucci believes that her clients achieve the best results by viewing themselves honestly and committing to improvement.

The same principles hold true, she said, in spiritual matters — and they serve as the basis for the new “Living Boldly” ministry that Bucci facilitates at her parish, St. Marianne Cope in Henrietta.

Bucci explained that the ministry encourages people to confront insecurities and fears — a necessary first step toward bettering their relationships with God, other folks and their own selves.

“It’s trying to help them go inside of themselves, peel another layer off,” she said, noting that folks are more likely to take that step when supported by others who can relate to their feelings and experiences.

Indeed, intense sharing marked the most recent Living Boldly session, conducted via Zoom March 4 and addressing the topic of “Freedom from the Fear of Letting Yourself Love.” Participants described how their lives have been affected by such issues as infidelity, divorce and tensions with family members, friends and coworkers. Some said that their experiences of hurt, betrayal and abuse often have left them with lasting anger and resentfulness.

Bucci noted during the meeting that such feelings can spur people to put up walls and be unwilling to love and trust, for fear of getting hurt all over again. She said the path to overcoming this self-isolation begins with trusting in God’s love.

“The only one who’s never going to hurt us is God. God’s always there for you,” Bucci stated.

Through this trust in God, she said, participants can rediscover confidence in their ability to develop and maintain quality relationships. Bucci stressed the importance of letting go of anger no matter how difficult a prospect that may seem, saying we are otherwise “going to stay stuck”; making a sincere effort to forgive those who have hurt us; judging ourselves and others less harshly; spending less time blaming other people as well as life circumstances for our unhappiness; emphasizing the good in our lives rather than what’s missing; and giving our burdens over to Jesus. Bucci said that practicing these potential approaches does not mean, in any way, that people should tolerate ongoing abuse. By the same token, she strives to reassure folks that not everybody is abusive just because one person is or was.

In order for any of her suggestions to take root, Bucci said that people must be willing to engage in deep self-reflection.

“I’m not going to give you answers. They have to come from inside of you,” Bucci told the March 4 gathering.

That meeting marked the second installment of Living Boldly, which debuted in early February. The next meeting is set for 7 p.m. Wednesday, March 31, with subsequent virtual get-togethers switching to the first Wednesday of each month at 7 p.m. In addition to in-depth conversation, the meetings include prayer, Scripture readings and spiritual reflections from noted speakers and authors. Future potential topics, according to Bucci, will address other fears that people commonly harbor, including those related to finances, illness, being alone, and what other people think and say about them.

Bucci said that the meetings will continue being held virtually due to the coronavirus pandemic until it’s safe enough to gather in person. Although Living Boldly was begun as a ministry of St. Marianne Cope, she said it’s open to anybody who may find it beneficial. To become involved or for further detail, contact Bucci at bucciteam4@frontiernet.net or 585-721-1056.

She acknowledged that not everybody can easily bring painful feelings to the surface in a group setting; thus, people who attend Living Boldly are not required to talk if they’re uncomfortable. However, she asserted that at some point “you have to be willing to open up” in order to effect personal change — if not to Living Boldly participants, then to one’s self later on.

This is no simple process, Bucci observed: “People are kind of afraid to get to the wound, to feel it.” She added that folks also might resist being open to God’s word, anticipating that he’ll ask them to do something that exceeds their comfort level.

The good news, she said, is that taking the term “Living Boldly” to heart may well result in the lifting of burdens and greater serenity in many aspects of life.

“God doesn’t want to see you miserable,” she said. “I want people to walk away seeing a better version of themselves.”