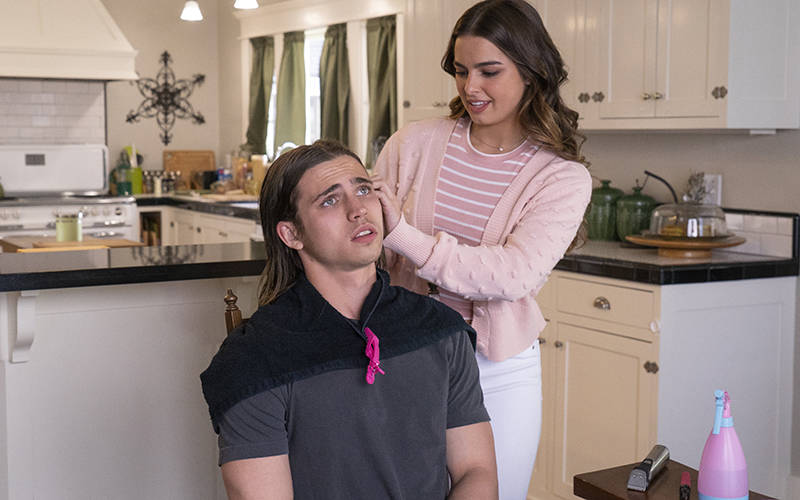 Tanner Buchanan and Addison Rae star in a scene from the TV show “He’s All That,” streaming on Netflix. (CNS photo by Kevin Estrada/Netflix)

NEW YORK (CNS) — For a featherweight romantic comedy, the TV film “He’s All That,” streaming now on Netflix, has a complex lineage. A gender-switched version of the 1999 movie “She’s All That,” its ultimate antecedents stretch much further back, through Lerner and Loewe’s 1956 musical “My Fair Lady” to George Bernard Shaw’s 1913 stage play “Pygmalion.”

And that’s not to mention the classical Greek myth on which Shaw drew, both for his basic theme and his title.

Generally pleasant — if predictable — the current product of this multimedia genealogy is acceptable for adults. Despite its high-school setting and mostly adolescent characters, however, it seems ill-suited to the teen audience at which it’s clearly aimed.

The plot is nothing if not topical. Social media influencer Padgett Sawyer (Addison Rae), a senior on the verge of graduating, has a huge online fanbase and an apparently perfect lifestyle.

The latter includes her relationship with her hip-hop singer boyfriend, Jordan Van Draanen (Peyton Meyer). As early scenes reveal, it was Padgett who created Jordan’s charismatic persona, single-handedly transforming him from a loser into a hot property.

After stumbling upon Jordan in flagrante with another lass, however, Padgett suffers a humiliating online meltdown that costs her many followers. This leaves her desperate to reclaim her popularity since her ability to pay for college is dependent on her now-threatened corporate sponsorship.

As a means of rebounding, Padgett makes a bet with her two best friends, Alden (Madison Pettis) and Quinn (Myra Molloy), that she can remake any student of their choosing into the king of the forthcoming prom. Her pals select discontented loner Cameron Kweller (Tanner Buchanan).

Going to work on this seemingly unpromising subject, Padgett discovers that gentle Cameron’s interests include caring for the horses at a local stable and a passion for photography. As she gradually cultivates Cameron’s untapped ability to come across as an Adonis, Padgett falls for her protege — but can’t bring herself to reveal to him the truth about her wager with her pals.

On its way to delivering messages about honesty and the dangers of pretending to be someone you’re not, director Mark Waters’ movie, scripted by R. Lee Fleming Jr. and rated TV-14 — parents strongly cautioned, takes in a benignly viewed, though incidental, gay relationship and includes fleeting partial nudity.

Its dialogue, moreover, is peppered with some crude and much crass language as well as the occasional profanity and a single F-bomb.

Padgett and Cameron’s bond, however, remains chaste for most of the runtime, leading up to a climactic kiss in the best Golden Age of Hollywood manner. A later glimpse of their future together can be read as suggesting a different arrangement, but this is subject to interpretation.

With problematic material offsetting its essentially positive underlying values, “He’s All That” probably lacks the moral heft that would justify allowing youngsters to join its audience.

Grown-ups who do give in will find topics for discussion in the picture’s politically correct depiction of human sexuality and in its less-than-wholehearted commitment to the idea that beauty is more than skin deep. Cameron, after all, does not return to sporting the stringy locks and emo-boy woolen hat he favors when Padgett originally encounters him.