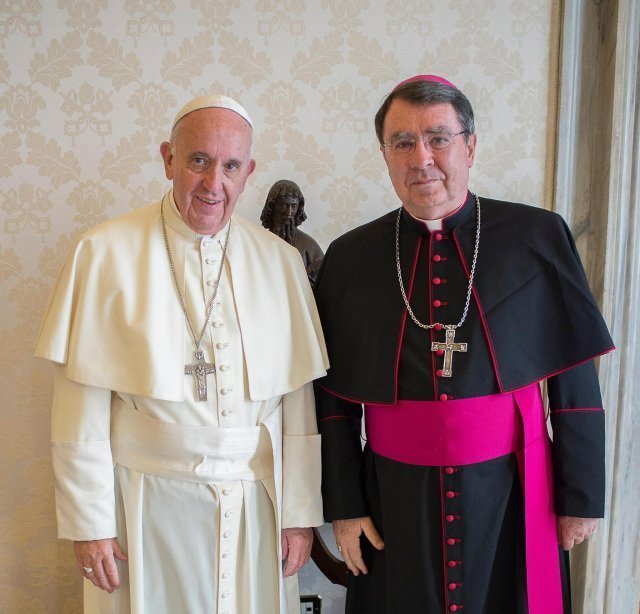 Pope Francis poses with Archbishop Christophe Pierre, the new apostolic nuncio to the United States, during an April 21 meeting at the Vatican.
VATICAN CITY (CNS) — Archbishop Christophe Pierre, the new nuncio to the United States, said he is ready to learn about the Catholic Church in the country and will try his best to be Pope Francis’ emissary, particularly in promoting a church that is close to those who suffer.
The archbishop, who had a private meeting at the Vatican with Pope Francis April 21, gave interviews the next day to the English and the Italian programs of Vatican Radio.
The 70-year-old French native has been in the Vatican diplomatic corps for almost 40 years and said a nuncio’s job is to help the pope fulfill his ministry of building up the local churches, respecting their diversity, while keeping them united with the universal church.
"The difficulty or the challenge," he said, is "to listen, to be careful about what’s going on, to understand, to exercise dialogue — I think that’s very important — to discover the beauty, the richness of the culture of the people, the way the people live (and) to help the inculturation of the Gospel in a particular culture."
At the same time, he said, a nuncio’s mission is "to help the pope understand — the pope and those that work with him — to understand what’s going on."
"The richness of the Catholic Church," Archbishop Pierre said, comes from that combination of valuing peoples and cultures and their local expressions of faith while being united universally.
The archbishop told Vatican Radio’s English program, "I’m quite excited — sometimes fearful," about leaving Mexico and going to the United States. He said his reaction was "oh" when the pope told him of his new assignment "because it’s such a big country, such a big history, but you know I’m trustful in God and very, very grateful for this mission which is given to me."
"I know I have to learn in the same way that when I arrived in Mexico nine years ago I had to learn a lot and I’m still learning, so I’m sure that during this year the American people — particularly the bishops, the priests, the religious, the laypeople — will be my teachers," he said. "I’m ready to learn."
The first mission the pope gives his nuncios, and the whole church, obviously is to proclaim the Gospel, he said. Next there is "the way the pope wants us and the church to be close to people, especially those who suffer, the poor. This is also what I’ve perceived in what he has told me and I will try my best to be a faithful emissary of the pope."
Speaking to the Italian program, Archbishop Pierre said being nuncio to the United States is "an enormous, difficult" ministry, but he is ready to take up the task. "The first thing is to learn, to listen, and I think that one of the qualities the pope asks of us is to be able to listen and not go in with preconceived ideas."
Copyright © 2023 Rochester Catholic Press Association, Inc. All rights reserved. Linking is encouraged, but republishing or redistributing, including by framing or similar means, without the publisher's prior written permission is prohibited.