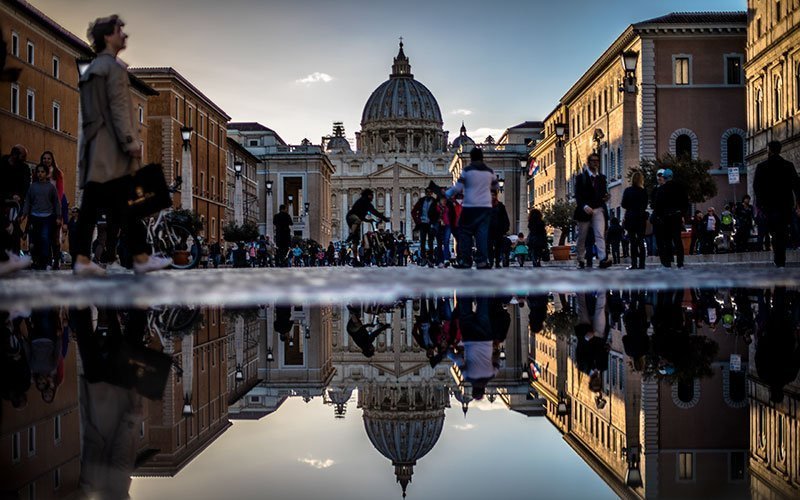 Priest on PBS special offers frank accounting of past, hope for future

NEW YORK (CNS) — A year in the life of what it calls “the Catholic world’s biggest theater of faith” is chronicled in the documentary “Inside the Vatican,” a BBC production premiering on PBS Tuesday, April 28, 9-11 p.m. EDT. Viewers should check local listings, though, since broadcast times may vary.

Over the course of 2018, filmmaker Silvia Sacco and her camera crew followed Pope Francis and many of the 2,600 employees who work inside the world’s smallest sovereign state. From security guards, cleaners and gardeners to diplomats, interpreters, choristers and priests and nuns as well, “Inside the Vatican” goes behind the scenes to witness the ebb and flow from Lent through Christmas.

At the main employee entrance, Pope Francis has placed an icon of the “Virgin of Silence” as a stern reminder that idle gossip should find no foothold inside the workplace. All labor stops at noon every day, so everyone can gather together to pray the Angelus.

The best moments feature those not wearing clerical garb. There are the Sediari, for instance, who once carried the sedia gestatoria, the now-disused portable papal throne, but who now welcome thousands of daily visitors and direct traffic with aplomb.

The Gendarmerie is the Vatican police force, always on the watch for terrorism, still haunted by the assassination attempt on St. John Paul II in 1981. Among other duties, miles of tunnels and passageways must be checked regularly for bombs.

The workers who clean, repair and move the furniture in St. Peter’s Basilica are called the Sanpietrini. Viewers will marvel as they scramble to the top of the massive baldacchino over the main altar, dusting and polishing the angels and cherubs of Bernini’s masterpiece.

The Sanpietrini see themselves as heirs to the original craftsmen who built the basilica 500 years ago. “For me, as a believer, to work in God’s house is the greatest honor,” says Andrea Benedetti, one of the supervisors.

The communications team makes full use of social media for papal promotion: @Pontifex on Twitter and @Franciscus on Instagram. Evidently, many of the followers are nonbelievers.

We meet Father Luigi Portarulo, recently ordained, yet no stranger to the Vatican, having served in St. Peter’s as an altar boy since he was 12. He plays in the Vatican soccer league.

Finally, there’s Mark Spyropoulos, the first English singer in the papal choir, who performs a solo at the Easter Vigil. Curiously, when asked if he believes in God (he says he is a Catholic), Spyropoulos responds, “I don’t understand the question. What do you mean by God? What do I know? I know that when I am immersed in this music, I feel in touch with something.” This seems unsettlingly vague.

Along the same lines, the film goes deeper than the Vatican’s daily routine and deals at length with the controversies that have arisen within the church under Francis’ pontificate.

“Making reforms,” the pope confesses, “is like cleaning the Sphinx of Egypt with a toothbrush.” Addressing members of the Roman Curia, the central administrative body, in his annual Christmas address, Francis pulls no punches about entitlement and the scourge of sexual abuse.

“To be Christian, particularly for us clergy, does not mean we can behave like a group of privileged people who think they have God in their pockets,” he says. “Today there are many from the clergy, people of God, who abuse the weak. Behind their great kindness, impeccable work and angelic faces, they shamelessly hide a fierce wolf ready to devour innocent souls.”

Yet, all hope is not lost, the Holy Father insists. “The church will come out of this more beautiful, perfect and splendid,” he says. “Christmas gives us the certainty that the real strength of the church is in our work, which is so often hidden.”

“Inside the Vatican” also offers brief airtime to papal critics, like Benjamin Harnwell, the founder of the Dignitatis Humanae Institute, a conservative think tank intended to uphold the traditional values of the Catholic Church.

“The pope isn’t defending the integrity of the faith that has been held for 2,000 years,” Harnwell maintains. “He is using his authority as pope to introduce novelties which have never been held or believed before in the history of the church, to impose those novelties onto the faithful.” As an example, he states, “Jesus Christ in his great commission didn’t tell anybody to go out and hold conferences on global warming.”

Undeterred, the Vatican is doing its part. Pope Francis has established its first recycling operation, collecting everything from cardboard to cooking oil.