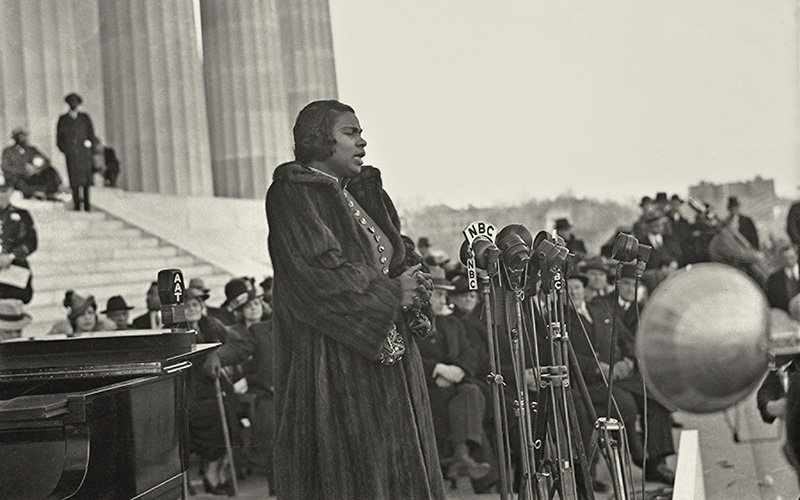 This is an image for the TV show "Voice of Freedom," premiering on PBS Feb. 15, 2021. (CNS photo by World History Archive, Alamy Stock Photo via PBS)

NEW YORK (CNS) — “Suitably wholesome, cultured — and white.” That’s how Renee Elise Goldsberry, the narrator of the biographical documentary “Voice of Freedom,” describes the criteria the Daughters of the American Revolution would have applied in 1939 to determine who could appear at their Washington concert auditorium, Constitution Hall.

Despite being “one of the more famous entertainers in the world,” African American singer Marian Anderson (1897–1993) obviously didn’t fit the DAR’s third criterion and so was barred from performing at their venue that spring. Filmmaker Rob Rapley makes this notorious incident and its triumphant aftermath central to his recounting of the celebrated contralto’s life.

Violence in the form of war, lynching, rape and slavery as well as poverty and racism are among the topics dealt with in the program, which is clearly not suitable for kids. When assessing it as fare for teens, on the other hand, parents will note that objectionable elements are absent, and that Anderson’s story is one of considerable educational significance.

Those familiar with the history of the interwar years will know the sequel to the rebuff the DAR dealt to Anderson.

First lady Eleanor Roosevelt, one of the thousands of DAR members who resigned in protest over the organization’s action, arranged for the singer to give an open-air concert on the steps of the Lincoln Memorial on Easter Sunday, April 9. 75,000 people attended the event in person while millions more listened to a national simulcast on NBC radio.

After the show’s prologue sets this crucial scene, Rapley shifts the focus to his subject’s Philadelphia roots. Anderson’s father, John, died when she was only 12, and his demise “plunged” her family “into poverty.”

Five years later, the choir of the city’s Union Baptist Church, which she had joined when she was 6, encouraged Anderson to apply to Philadelphia’s Academy of Music. The prestigious school, however, had no room for a Black student — and so Anderson’s youthful dream was crushed.

Setbacks continued and Anderson’s career languished until she sailed for Europe in 1927. “In London and Berlin, she dived into the education she had been denied at home,” Goldsberry observes. By the time Anderson, now a mature artist, toured Scandinavia in the 1930s she was met with a level of enthusiasm that warranted the nickname “Marian fever.”

The rise of Nazism as well as shifting European attitudes later prompted the performer to return to the States.

Despite the central role she was to play in a landmark incident in the struggle for civil rights at home, Anderson was never “comfortable speaking out on the profound problems of institutional racism,” says University of Michigan assistant history professor Kira Thurman. This explains the ambivalence Anderson displayed at the prospect of the Lincoln Memorial recital.

Her performance, nonetheless, exerted a lasting influence. The Rev. Martin Luther King Jr., who had heard the NBC broadcast as a 10-year-old, invited Anderson to return to the memorial and sing for participants in the March on Washington that culminated there Aug. 28, 1963.

It was from the same spot at which Anderson had stood a quarter-century earlier, moreover, that Rev. King delivered his immortal “I Have a Dream” speech that day.

Even viewers who may not entirely agree with the racial analysis put forward in “Voice of Freedom” will appreciate the wonderfully evocative nature of the program’s archival footage and still photos. They’ll also likely come away from the show with deepened insight into Anderson’s enduring contribution to American culture.