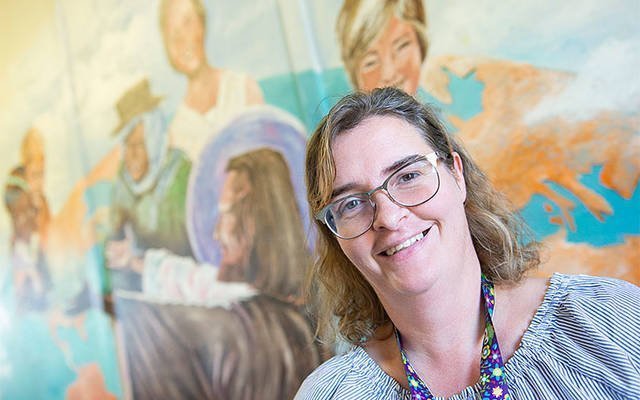 Debra Marvin has never been one to shy away from a challenge, especially when it concerns education.

When she was a child, Marvin always took on the role of teacher whenever she and her four siblings played school, even though three of her siblings are older than she is. When the Diocese of Rochester and the school where she teaches, St. Mary School in Canandaigua, sought volunteers for a fellowship program through the University of Notre Dame, she signed right up.

Marvin took on another challenge at the end of August, when she became the new principal at St. Michael School in Penn Yan. This role is challenging, Marvin said, because it’s only a part-time position. St. Michael School needed a new principal after its former leader, Tom Flood, retired after the 2018-19 school year, she said, but only had the budget to hire a part-time principal.

“The biggest challenge is I still have full-time responsibilities, but only half the amount of time to do it,” Marvin explained.

Marvin also is still the full-time technology coordinator at the Canandaigua school, a position she has held since August 2014.

“It really becomes a balance of urgency and priority and being very creative,” Marvin explained of splitting her time between the two schools. “We’re starting to come up with a plan where I can actually address a class or the school digitally.”

Marvin expects this capability might become especially useful in the winter months, when weather conditions may make travel between the two schools more difficult.

“If I can’t physically be present, at least I can still have a presence that we couldn’t do before,” said Marvin, who has a bachelor’s degree in history from SUNY Geneseo, a master’s degree in curriculum and instruction from University of Phoenix, and a master’s in school leadership from Stony Brook University.

Marvin’s decision to accept two simultaneous positions at schools 25 miles apart was not made lightly, but reflects her desire to support Catholic education in the region, regardless of how challenging it might be to do so.

There were so many principal positions open over the summer that St. Michael struggled to find candidates interested in its part-time position, Marvin said. As the summer wore on and it became “crunch time,” a colleague suggested she apply for the position. After learning she’d been selected as St. Michael’s new principal, she decided to also stay on the staff at St. Mary School because she knew it likely would be hard for the Canandaigua school to find a new technology teacher so late in the summer.

“I felt it was beneficial to both (schools) for me to take both positions and try to make them worthwhile,” Marvin explained.

She made this decision with the support of her principal at St. Mary School as well as her husband, James. Marvin, who was born in Pennsylvania and grew up in the Finger Lakes region, is a product of public-school education, but her husband attended Catholic elementary and high schools. Their children attended St. Mary School, where two currently are in second grade, and the couple firmly believes in the value of Catholic schools.

“They’re all valuable, and they need to be preserved and enhanced,” she said.

St. Michael School in particular has a lot to offer, Marvin said, yet sadly many people in the area are relatively unfamiliar with the Penn Yan school and the good work it does. She said many people don’t know, for example, that every student in St. Michael’s third through fifth grades has dedicated Chromebooks to use for schoolwork.

Marvin hopes to increase awareness of the school by enhancing its presence online and on social media. She believes doing so will lead more families to learn more about St. Michael and ultimately send their children to the Penn Yan school, which this year is celebrating the 139th anniversary of its founding.

“My goal for St. Michael’s isn’t to get through this year or even the next five years. I want another 139 years,” Marvin said. “Honestly, it’s not an exaggeration when they call St. Michael’s the gem of the Finger Lakes. They are an amazing community with a lot of support. The families are dedicated to education and the faith for their children.”