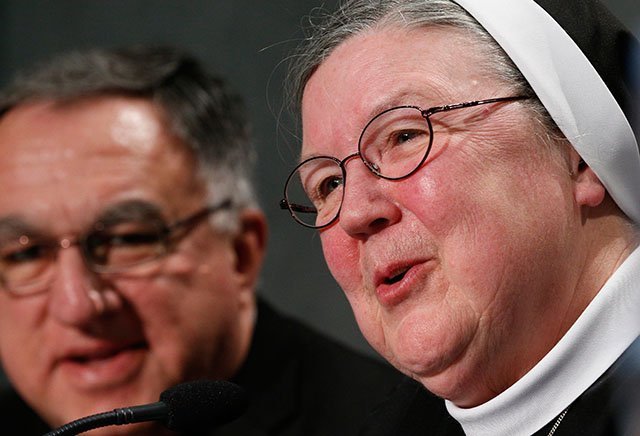 Mother Mary Clare Millea, superior general of the Apostles of the Sacred Heart of Jesus, speaks during a Dec. 16 Vatican press conference for release of the final report of a Vatican-ordered investigation of U.S. communities of women religious. Mother Millea was the Vatican-appointed director of the visitation.

VATICAN CITY (CNS) — During the process of the apostolic visitation of communities of U.S. religious women, a shift in tone took place.

The Vatican’s final report on the visitation, released Dec. 16, made observations, not accusations. Instead of giving the women instructions, it made suggestions — mostly encouraging them to continue discernment about their identity, vocations promotion and formation, fidelity to Christ and the church, community life and cooperation with the wider church, including local bishops.

The tone change was partially the result of the dialogue style those conducting onsite visits were instructed to take, and partially because the sisters decided to share their own decades of discernment and struggle with the visitors.

Mother Mary Clare Millea, superior general of the Apostles of the Sacred Heart of Jesus and the apostolic visitor appointed by the Vatican, told Catholic News Service Dec. 16 the biggest change she saw was in the public perception of the visitation.

“The surprise announcement (of the visitation) caught people off guard and made them guarded,” she said.

But a change in the leadership of the Vatican congregation overseeing the visitation also contributed to the new tone. Cardinal Joao Braz de Aviz, who was named prefect of the Congregation for Institutes of Consecrated Life and Societies of Apostolic Life in 2011 — two years after the visitation began — told reporters Dec. 16 that he and his leadership team have decided their main approach to religious orders will be to spend time with them, visiting them — not conducting visitations, except for very serious reasons.

“We are putting more of an accent on going to them, not to identify mistakes or judge situations, but to listen to the sufferings, see the difficulties, listen to what they are going through,” the cardinal said. The congregation wants “more of the climate of a family — I’m not saying this didn’t exist before — but we are emphasizing it more.”

However, the biggest change since the visitation began in 2009 was the election of Pope Francis.

As a Jesuit and former Jesuit provincial, one who admits he made mistakes by being authoritarian as a young superior, Pope Francis knows the world of consecrated religious life from the inside. Throughout his pontificate he has used that experience to instruct, encourage and exhort religious to be courageous, joyful and prophetic, to “wake up the world.”

Although he will sometimes apologize for giving “publicity” to St. Ignatius, founder of the Jesuits, time and again Pope Francis looks to his order’s founder for inspiration and instruction, just as women religious look to their founders. His meditations on the meaning of poverty, chastity and obedience lead to very concrete and nuanced observations; he, too, made those vows as a way of following Jesus as completely as humanly possible.

And then there are his observations about community life, which his comments highlight as an essential — and perhaps most challenging — part of consecrated life.

Meeting in early November with the superiors of men’s communities in Italy, the pope said, “Please, don’t let the terrorism of gossip exist among you. … If you have something against your brother, tell him to his face. Sometimes it might end in fisticuffs,” he said, causing the superiors to laugh. “That’s not a problem. It’s always better than the terrorism of gossip.”

While tough on gossip, Pope Francis is even tougher on people breaking with the church’s tradition, creating scandal or division or acting as if the Holy Spirit could lead them to ignore the hierarchy.

Responding to God’s call to enter religious life means feeling, thinking and acting in communion with the church, which “generated us through baptism,” he told the women’s International Union of Superiors General in May 2013. Christians do not do good because of a “personal inspiration, but in union with mission of the church and in its name.”

Religious superiors, Pope Francis told the women, need to ensure their members are educated in the doctrine of the church, “in love for the church and in an ecclesial spirit.”

A month later, meeting with members of the Latin American and Caribbean Confederation of Men and Women Religious, or CLAR, he urged religious to put greater effort into dialogue with their bishops and to courageously minister to the poor without worrying they might receive a questioning letter from the Congregation for the Doctrine of the Faith.

If the letter comes, “don’t worry. Explain what you have to explain, but keep going,” he told them, according to a leaked report from one of the participants.

As both a former Jesuit superior and former archbishop of Buenos Aires, Pope Francis recognizes how much effort and good will is needed to respect both religious orders’ discernment of what ministries to engage in as well as a bishop’s responsibilities as shepherd, teacher and leader of the local church.

In November 2013, meeting with the international men’s Union of Superiors General, Pope Francis announced that he had asked the congregation for religious to revise “Mutuae Relationes,” a set of directives issued jointly with the Congregation for Bishops in 1978. The document said that religious orders are part of the local church, though with their own internal organization, and that their “right to autonomy” should never be considered as independence from the local church.

“That document was useful at the time but is now outdated,” the pope told the superiors. “The charisms of the various institutes need to be respected and fostered because they are needed in dioceses,” and consecrated men and women cannot be seen simply as employees.

The point is not to allow religious to set up parallel structures or have free rein in a diocese, but to allow them to offer their unique gifts to the church and the world. After all, Pope Francis insists, the church exists to bring God’s love to the world and the Holy Spirit has a variety of ways to do that.

Meeting with members of the Vatican congregation for religious in late November, Pope Francis said he knows not all the news about religious life is good and the church should not “hide the areas of weakness,” including “the diminished ability to attract new members, the not irrelevant number of those who leave — this really worries me!”

At the same time, “consecrated life will not flourish as a result of brilliant vocation programs, but because the young people we meet find us attractive, because they see us as men and women who are happy,” he wrote in a letter for the 2014-15 Year of Consecrated Life. Consecrated life is not about efficiency, he said, but about “the eloquence of your lives, lives which radiate the joy and beauty of living the Gospel and following Christ to the full.”