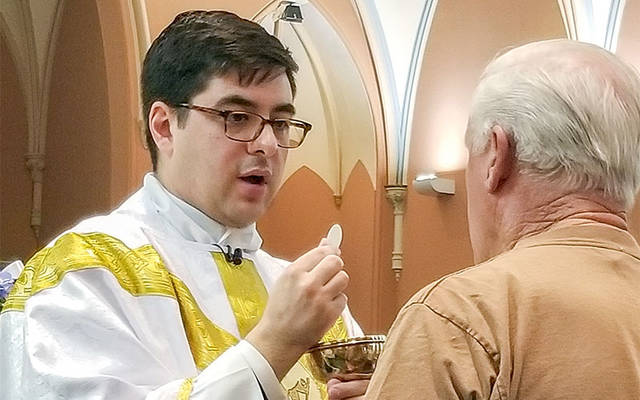 Father Daniel L. White distributes Communion during the 9 a.m. Mass June 2 at St. Patrick Church in Owego. It was the first Mass at which Father White presided after being ordained June 1. (Courier photo by Mike Latona)

OWEGO — Although thousands of Masses may await Father Daniel L. White in his priesthood, none will again hold the same special distinction as the one this past June 2.

Father White presided at the 9 a.m. Mass at St. Patrick Church, less than 24 hours after he was ordained a priest of the Diocese of Rochester by Bishop Salvatore R. Matano. The liturgy in Owego marked Father White’s first-ever celebration of a Mass, taking place at his childhood church with his parents, Lawrence and Debra, and several other family members and friends in attendance.

“I think that the ordination was beautiful, but this Mass is when it kind of started to really sink in (that I’m now a priest),” Father White, 35, told the Catholic Courier as he greeted well-wishers after the liturgy ended. He then proceeded to the church hall for a reception in his honor, visiting each table to exchange pleasantries with guests.

Father White admitted to initially struggling with “a little bit of nerves” on the morning of June 2, but said that he settled in comfortably once the Mass got started.

“It was wonderful, just to be back here with all these people who have been praying for me,” he said.

Father White was one of two priests to be ordained June 1 at Rochester’s Sacred Heart Cathedral; the other was Father Matthew Walter, whose home parish is Our Lady of Victory/St. Joseph in Rochester. Father White expressed thanks to the congregation during his June 2 homily, noting the importance of his supporters’ prayers in the years leading up to his ordination.

He asked those in attendance to continue their prayerful support, drawing laughs by quipping, “Now it’s in your own self-interest to do that.” He was referring to the fact that he’s been assigned as the parochial vicar at St. Patrick and the three other Tioga County churches making up Blessed Trinity/St. Patrick parishes: St. James, Waverly; St. John the Evangelist, Newark Valley; and St. Margaret Mary, Apalachin. In the days following the June 2 liturgy/reception at St. Patrick, Father White attended three additional welcoming receptions after presiding at Mass. They occurred June 8 at St. James, June 9 at St. John the Evangelist and June 16 at St. Margaret Mary.

“I was very surprised,” Father White recalled about learning of his first assignment, noting that newly ordained priests don’t typically start out at their home parishes. However, Father White observed that the placement makes sense, noting that he can be a familiar face during a time of priestly transition at Blessed Trinity/St. Patrick.

In his role as parochial vicar, Father White replaces Father Anthony Amato, who had served at the Tioga churches since being ordained a priest in 2017 and was concelebrant of Father White’s first Mass June 2. Father Amato has been assigned as parochial vicar of St. Maximilian Kolbe and St. Katherine Drexel parishes in Wayne County. In addition, Blessed Trinity/St. Patrick has a new pastor, Father Jeffrey R. Galens, who comes to Tioga County from the Archdiocese of New York. Father Galens takes the place of Father Mitchell Zygadlo, who had been Blessed Trinity/St. Patrick’s temporary administrator since late 2018 and has now begun as the pastor of St. Louis Parish in Pittsford.

Father White’s entrance into the priesthood marks the culmination of a lengthy vocational journey. After earning a bachelor’s degree in psychology from the University of Buffalo, he eventually entered the Priestly Discernment Program at Franciscan University in Steubenville, Ohio. From 2010-15, he was a friar in the California-Arizona Province of the Order of Discalced Carmelites. Father White began priestly formation for the Diocese of Rochester in 2016, attending St. John’s Seminary in Boston, Mass. He was ordained a transitional deacon by Bishop Matano in 2018.