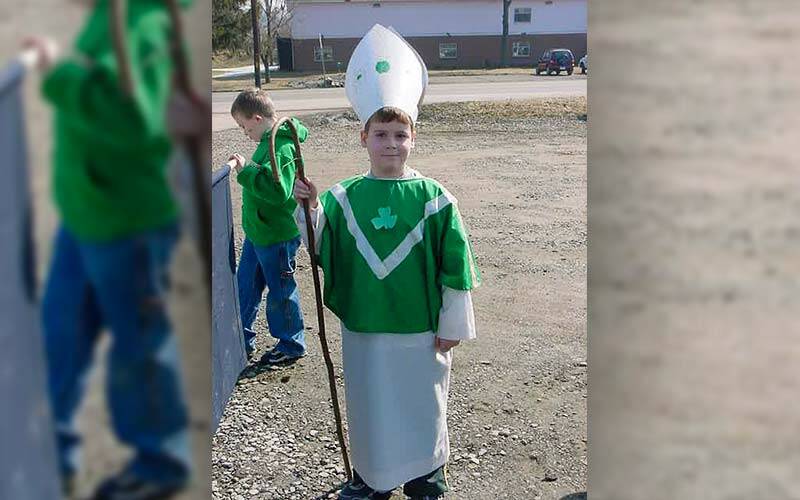 ROCHESTER — Judging from the large congregations at his ordination and Mass of Thanksgiving July 2 and 3, Father Aaron Kelly has made quite a few friends en route to the priesthood.

“It’s really exciting to see all these worlds collide in one moment,” he remarked.

However, only a select few have joined family members in watching Father Kelly’s vocation develop over the long haul.

‘Going to be a priest’

Once such person is Sharyn Taets, who was Father Kelly’s second-grade teacher two decades ago at St. Mary Our Mother School in Horseheads. She clearly recalls the way Aaron responded to her request that he dress up as the Irish saint as part of the school’s role in a local St. Patrick’s Day parade.

“He was so reverent, always. He led the whole school (at the parade). And I said to myself, ‘This boy is going to be priest someday,’” Taets said. She added that in his subsequent years as a St. Mary Our Mother student, “I’d tell him ‘You’re going to invite me to your ordination, right?’”

Invite her he did. In fact, Taets was a lector at Father Kelly’s Mass of Thanksgiving July 3 at St. Jerome Church in East Rochester; she also attended his ordination Mass the previous day at Rochester’s Sacred Heart Cathedral. She and her husband, Dennis, traveled in for ordination weekend from Fredericksburg, Va., where they now reside.

“I wouldn’t have missed this for anything,” she said. “We’ve been so blessed to be a part of this journey with him.”

Serving as the other lector at Father Kelly’s Mass of Thanksgiving was Barbara Matterazzo, retired faith-formation coordinator for St. Mary Our Mother Parish. Like Taets, she described her friendship with Father Kelly as one that grew over the years along with his growing interest in the priesthood.

“I learned as much from him as he did from me,” recalled Matterazzo, a Horseheads resident. She said she could always sense that Father Kelly “had the courage and the perseverance and the fortitude” to eventually become a priest.

Father Kelly noted that in the weeks leading up to his ordination, he spent considerable time reflecting on people like Taets and Matterazzo who have been involved in his vocational journey.

“While there’s something particularly important about the ordination day for myself, in some ways it’s meaningless without all of the people there who have been a support over the years,” he said. “Having so many people there from all aspects of my life — from when I was first born up until recently my time (as a seminarian) in Rome — all of those people have helped shape me into who I am today and the priest that I will be. And so having them (at the ordination) means the world to me. Because as much as it is about me, it’s about them and what they have done.”

Among Father Kelly’s newer supporters are Fathers Richard and Robert Beligotti, senior priests for the Diocese of Rochester, who struck up a friendship with him in recent years. The twin brothers also hail from the Southern Tier, having grown up in Schuyler County’s St. Mary of the Lake Parish less than 25 miles from Father Kelly’s native Breesport in Chemung County. The Beligottis traveled from their home in Venice, Fla., to be on hand for the ordination.

“This was just magnificent. Everything was glorious,” his brother chimed in.

Yet as special as the ordination festivities were for all involved, Taets said the best is yet to come as Father Kelly begins his priestly ministry.

“I’m so excited to see what he’s going to be able to do as a priest,” she said.