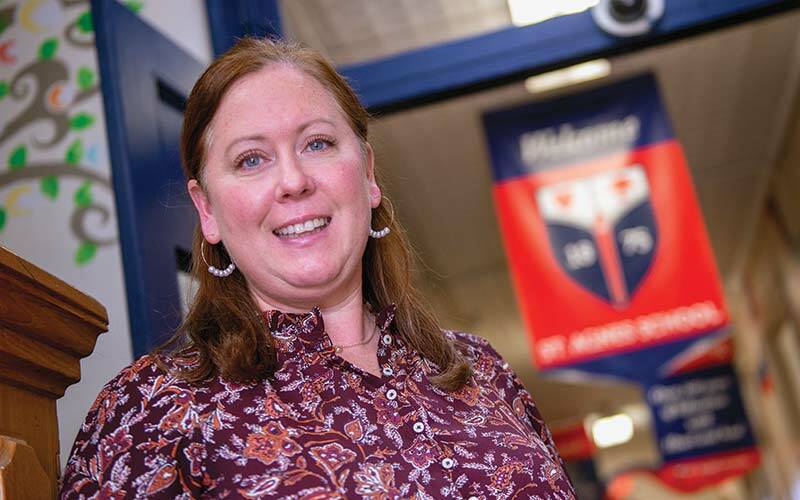 AVON — For a good many students, a visit to the principal’s office is about the least preferred activity imaginable. Johnny Dowd, on the other hand, stops in on his principal every school day — not for disciplinary reasons, but simply to get a ride home.

The fifth-grader’s principal, you see, also happens to be his mother.

As of this past August, Liz Dowd is the first-year principal of St. Agnes School after having served as the school’s fourth-grade teacher the previous four years. Thus far, she said, the transition has gone quite seamlessly.

“I’m loving it,” she exclaimed.

This marks Dowd’s first principal’s role in a career that also includes 10 years of public elementary-school teaching in the Honeoye, Oakfield-Alabama and Livonia school districts. A Caledonia native, she earned her bachelor’s degree in psychology from SUNY Cortland, master’s in elementary education from Roberts Wesleyan College, and master’s in elementary literacy from Walden University, an online institution.

Dowd’s initial involvement with St. Agnes came through volunteer and committee positions after she and her husband, John, began sending their three children — Johnny, Sophie and Emmie — to the school. Finding herself highly attracted to its environment, she eventually began teaching there in 2017-18.

“I knew how special this place was, and I just listened and trusted in God that I was being put in the right place,” she recalled. “I knew what a privilege it would be to combine my spirituality with my love for education in such a warm, special setting.”

During her St. Agnes tenure, Dowd has taught two of her children, as well as coached all three in the school’s Page Turners reading club “which was lots of fun,” she said.

Dowd attributes much of the positive atmosphere at St. Agnes to to the school’s two previous principals: the late Dr. Gerald Benjamin, who served in that position for 19 years until his 2016 retirement; and his successor, Elizabeth Jensen.

“Both my predecessors, they set such a strong culture here,” Dowd said, adding that Jensen, along with administrators from the Diocese of Rochester, have supported her own evolution toward leadership. She noted that last spring, as soon as she learned that Jensen was leaving St. Agnes to become principal of Webster’s St. Rita School, “I jumped at the opportunity” to pursue the open position.

Dowd is presently working toward her administration certification from the University of Rochester’s Warner School of Education, thanks to a diocesan sponsorship for teachers who become principal within their schools but still have requirements to fulfill for that position. In addition, Dowd is representing the Finger Lakes principals on the diocesan Catholic-schools board. She also is coleading a diocesan video instructional coaching program, an optional professional-development opportunity for teachers.

In her new role as St. Agnes’ principal, Jensen said she hopes to increase the school’s slate of enrichment offerings by adding clubs in such areas as STEM, foreign language, science and cooking, making use of volunteer parents who specialize in those areas. She’s also looking to continue an upward enrollment trend that has seen the prekindergarten through grade 6 school — the only Catholic school in Livingston County — increase to 109 students in 2021-22, a substantial jump from 96 students in 2020-21 and 80 in 2019-20.

Dowd observed that it’s vital for her, as principal, to continue fostering an upbeat school atmosphere in the face of challenges presented by the coronavirus pandemic: “Our children need to be supported in so many ways — academically, socially, emotionally.”

On the other hand, she remarked, “I am so proud that our community has not let the pandemic slow us down. It’s actually brought us closer. We have found creative ways to still bond.”