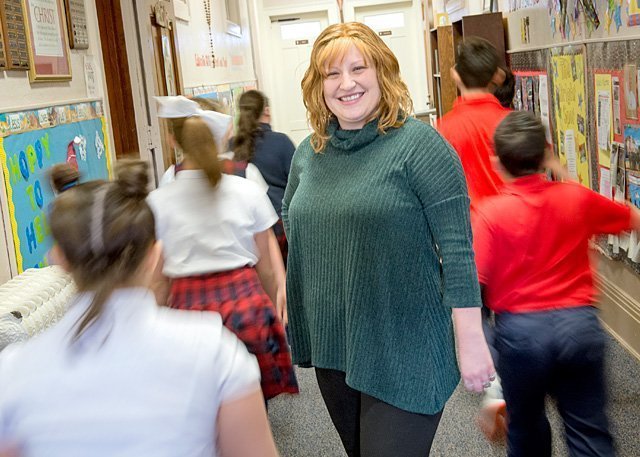 Elizabeth Jensen is the new principal at St. Agnes School in Avon.

AVON — While interviewing for the principal’s position at St. Agnes School, Elizabeth Jensen received a memorable assessment from Dr. Gerald Benjamin, the outgoing principal, who was sitting in on the interview process.

"In the middle of the interview Dr. Ben stopped and said, ‘You know who you remind me of? Bette Midler,’" she recalled with a laugh.

Jensen acknowledged similarities between herself and the famous singer/actress, who is renowned for her abundant energy and enthusiasm.

Yet her main gig is education, not entertainment, and Jensen’s experience and leadership skills earned her the privilege of overseeing St. Agnes beginning this past Aug. 1.

Jensen, 34, is a Rochester native who attended elementary school at St. Ambrose School (now St. John Neumann School) and middle school at Our Lady of Mercy. She graduated from Webster Schroeder High School and went on to Hobart and William Smith Colleges, where she earned her bachelor’s degree in education in 2005 and master’s degree in 2006.

After three years of teaching in Liverpool near Syracuse, Jensen began in 2009 at Rochester Preparatory — Brooks Campus, a charter school in Rochester. She spent five years there, starting as a teacher and becoming an instructional coach and department chair. In the fall of 2014 she moved to PUC Achieve Charter School, also in Rochester, where she taught for two years.

Although she said she loved working in an urban charter-school environment, Jensen said she felt called to administration and, as a Catholic-school graduate, had kept her eye open for a chance to return to those roots.

In her new duties at St. Agnes, Jensen said she has found no cause to do any major tinkering.

"Clearly, what they’re doing is working," she said of the school’s faculty. "So what can I do to make their job easier and just up our game a little bit?"

Jensen added that she places a high priority on being accessible to teachers and students; in fact, she had a small window installed in her office door to better reflect her visibility. Her predecessor, Benjamin, was similarly known for his personal touch during his 19-year tenure at St. Agnes that ended with his 2016 retirement. Jensen noted that she maintains some traditions associated with Benjamin, such as greeting students outside each morning as they arrive.

On the other hand, Jensen said she’s also been allowed to be her own person.

"I definitely had some fear; there were big shoes to fill," she said, noting that during the transition Benjamin himself "was so supportive. He made me feel like it was OK to come in and do this job."

Jensen cited the same kind of support from school families — who have greeted her, she said, "with open arms" — as well as Father Michael Fowler, parochial administrator at St. Agnes Church, and Brian Denney, finance director. For that matter, Jensen is fond of the Avon community as a whole.

"It just blows my mind, how kind people are in this town," said Jensen, who currently resides in Henrietta.

She stressed that all the support is vital toward preserving the future of St. Agnes, which was founded in 1875 and is the only Catholic school in Livingston County. The new principal takes an active role in marketing and promotion, noting that the school’s website has been updated and its social media presence has been considerably expanded.

"I wanted people to see who we are. The school is all heart — and with that love, you also get a quality education," Jensen said. She added that children who attend St. Agnes benefit from the family atmosphere and faith-based setting, whether they’re Catholic or not: "I think there are a lot of people who want this for their children."

Jensen said the future looks promising. For instance, St. Agnes is currently a prekindergarten through grade 5 school, but enough fifth-graders are committed for the 2017-18 school year that the return of a sixth grade is in the works.

All told, Jensen appears to be settling in for a long stay in her first role as principal.

"Every day I thank God for being here because this has been such a gift," she said. "I’m doing things that I love in a place that I love, with people I love and children I love."