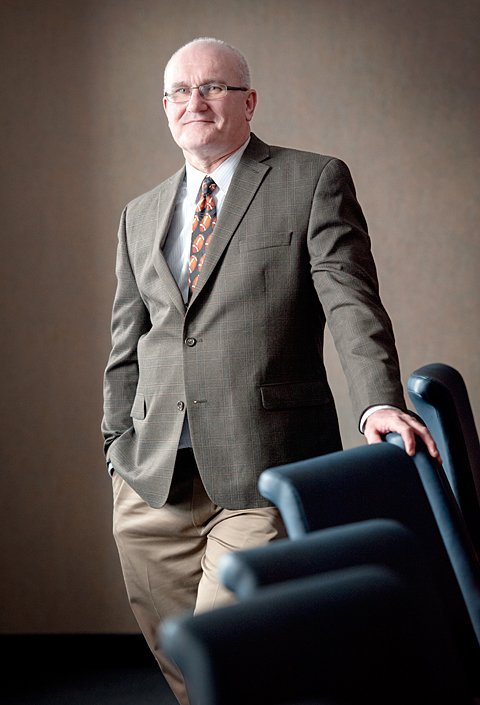 Mike Carney took over Jan. 4 as principal at St. Joseph School in Auburn.

As a former athletic director, Michael Carney knows well the importance of teamwork, and he brings that perspective to his new role as principal at St. Joseph School in Auburn.

"I’m really very pleased to be there. I know it’s a good fit," Carney recently told the Catholic Courier.

Carney officially took the reins at the Auburn school on Jan. 4, when classes resumed after Christmas break, but he’d served as interim principal since the mid-November 2015 resignation of St. Joseph’s former principal, Susan Nedza. He already has developed a rapport with both the faculty and the students at St. Joseph. Carney said the students in particular love his wacky ties, with his SpongeBob SquarePants tie being their favorite.

"They look every day to see which tie I’m wearing. They actually get very depressed when they see I’m wearing just a regular adult tie," he remarked.

Carney, for his part, admires the students at least as much as they admire his colorful ties. St. Joseph students are articulate, talented and not afraid to converse with adults, he noted.

That distinction is due to the hard work of the dedicated teachers at St. Joseph, he said, noting that one of his goals as principal is to reassure his teachers that their work is important to the community and is making a difference in their students’ lives.

After earning his bachelor’s degree Carney taught physical education at public schools in New Jersey for five years before moving to Irondequoit in 1986. He then spent the next 22 years as a physical-education teacher for the Rochester City School District. He then served as a school coordinator of health, physical education and athletics for the city schools from 2009-13.

Carney and his wife, Colleen, are longtime members of St. Kateri Parish in Irondequoit, where they raised their five children and were involved with everything from faith formation and confirmation-preparation classes to pre-cana classes and vacation Bible school. After talking with Anthony S. Cook III, diocesan superintendent of Catholic schools, and shadowing Jackie Senecal, principal at Rochester’s St. John Neumann School, he decided he was indeed being called to serve in diocesan Catholic schools, although he didn’t expect to be able to apply for any open principal positions until the summer of 2016. He learned of the open position at St. Joseph School on Veterans Day 2015, and found out he’d been appointed principal just a week before Christmas.

"I still look back and think, ‘How did this happen so fast? Why is the fit so good?’ You have to wonder if you’ve been preparing your whole life to be there," he said.

Carney likes the fact that his new school includes sixth, seventh and eighth grades, like his own alma mater in Buffalo, and he loves the sense of history and tradition he feels while walking through St. Joseph’s halls.

"The number of people I’ve met who went there as kids themselves and are now parents — and their hopes and dreams that the school do for their children what it did for them — is impressive," he noted.

Although Carney still lives in Irondequoit, he said he enjoys driving and doesn’t mind his hour-long commute.

"The hour goes by very quick. The more you do it, the faster it goes," he said. "I’ve not found the commute difficult. When you like where you’re going, it’s not hard."