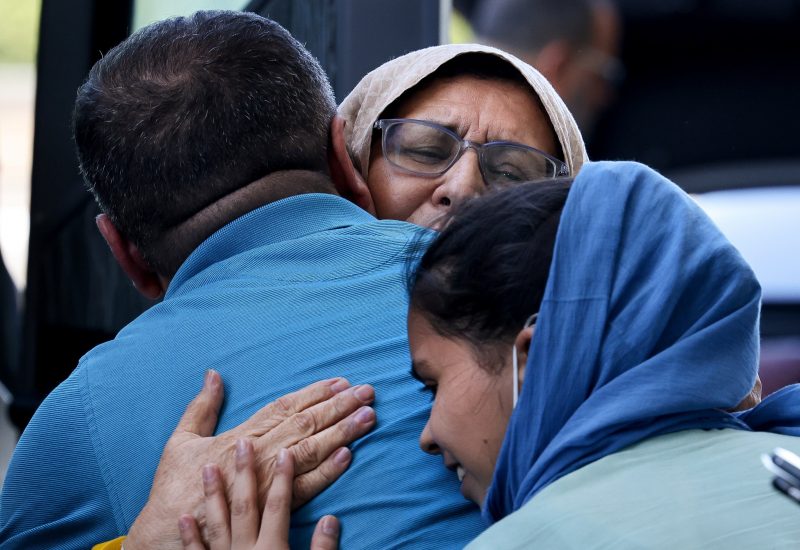 Afghan refugees embrace family members after arriving at Dulles International Airport in Dulles, Va., Sept. 2, 2021, before boarding buses that will take them to a processing center. Catholic organizations are applauding the Jan. 19, 2023, announcement of a new State Department program called the Welcome Corps that allows groups of private individuals to directly support refugees resettling in the U.S. (OSV News photo/Evelyn Hockstein, Reuters)

The Welcome Corps allows applications from private groups formed by five or more people to sponsor refugees for their first 90 days in the country. The groups would be responsible for raising at least $2,275 per refugee, greeting them at the airport, arranging housing, enrolling children in school and finding jobs for adults.

“It’s a bold innovation that is really harnessing the community’s efforts,” said Rachel Pollock, director of resettlement services at the U.S. Conference of Catholic Bishops’ Migration and Refugee Services department, told OSV News. “This is going to be a really good opportunity for parishes across the U.S. to engage in this life-saving work.”

The Welcome Corps builds off earlier sponsorship programs for Afghans and Ukrainians and is helmed by a consortium of nonprofits with previous experience in community-based resettlement. The nonprofits will be responsible for vetting, certifying and training private sponsors, and monitoring the program to ensure refugees receive adequate support.

The State Department said in a news release that “by tapping into the goodwill of American communities, the Welcome Corps will expand our country’s capacity to provide a warm welcome to higher numbers of refugees.” The department hopes 10,000 Americans will join the Welcome Corps in its first year to help at least 5,000 refugees.

Sponsor groups are not required to support refugees beyond 90 days. After that period, refugees are eligible for other federal programs, but a State Department official said the goal was for refugees to become “self-reliant as quickly as possible.”

Pollock anticipated parishes would be interested in forming Welcome Corps groups, especially once direct referrals of refugees to USRAP becomes available, since that will assist with family reunification.

“Parishes have long served as sponsors of refugees. There are so many of those stories in our history, so I think this is something people will be eager to do,” she said.

Ed Langlois, spokesman for Catholic Charities of Oregon in Portland, said the prospect of partnerships with more citizens is exciting.

“This kind of cooperation has worked well in Canada and other countries, and we suspect that the goodwill of Oregonians will make it work here as well,” Langlois told OSV News. “When it comes to resettling refugees, we should have all hands on deck.”

Claire McIlwain, refugee services program coordinator for Catholic Charities of Oregon, said it was too early to say how private sponsorship groups would interact with existing resettlement agencies like hers.

“We’re waiting to see what our role will be and how we will get to support this new program going forward,” she said. “It’s going to be interesting to see how it rolls out. I’m excited and hope it’s successful in bringing in more folks.”

Resettlement agencies, which receive only 90 days of federal funding to support refugees, and private sponsorship groups should offer identical services during that time frame.

The key difference will be in long-term support. A state program in Oregon offers additional funding for two years of case management for refugees, which McIlwain said was critical because “90 days is not really sufficient in adjusting to a new environment.”

At least one group expressed concern about the program. Anna Rossi, chair of the refugee accompaniment ministry in the Alameda Deanery of the Diocese of Oakland, California, said the Welcome Corps’ “intentions are good and the basic idea is wonderful, but it’s very naive.” Rossi said 90 days of support is too little, the work involved in helping new arrivals could lead to burnout in small groups, and finding landlords willing to rent to refugees can often be “a horribly difficult task.”

Rossi said her parish-based ministry has no plans to change to a Welcome Corps group, since it enjoys strong parish and community support and has connections to local refugee service organizations. However, because several of the refugee families they’ve helped still have relatives overseas, “a pathway with this new law to help family reunification could be something we’re interested in,” she said.

President Joe Biden set a target of 125,000 refugee admissions to the U.S. during the 2023 fiscal year, which started in October. Just 6,750 refugees have arrived in the fiscal year’s first quarter.

Tags: Catholic Charities, Refugees, USCCB
Copyright © 2023 OSV News / Our Sunday Visitor, Inc. All rights reserved. Linking is encouraged, but republishing or redistributing, including by framing or similar means, without the publisher's prior written permission is prohibited.