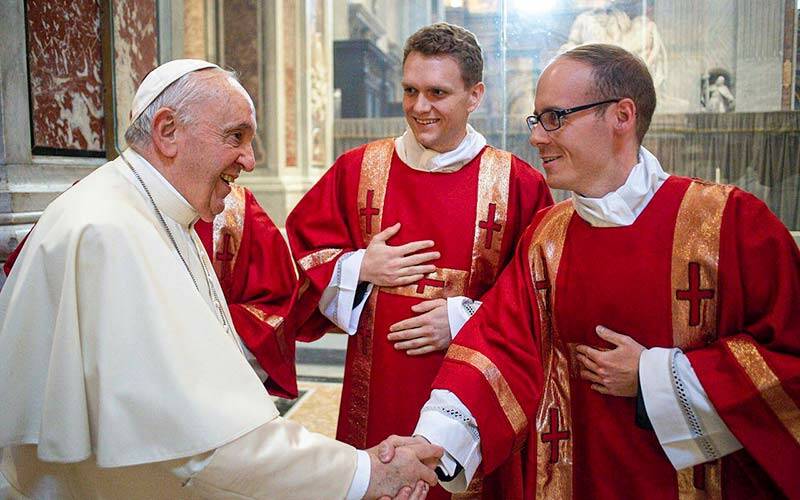 HORSEHEADS — A native of the hamlet of Breesport — population under 1,000 — Aaron Kelly entered the seminary with scant worldly experience.

Ah, how things can change in nine years.

From his quiet childhood surroundings, Father Kelly went on to priestly studies in three of the world’s major cities: New York, Washington, D.C., and Rome. Just as prominent as his educational settings are the Catholic dignitaries Father Kelly has encountered, all the way up to Pope Francis.

“It’s a journey that I could never have imagined,” he acknowledged. “The opportunities that have presented themselves over these nine years have been beyond any imagining.”

Aaron Kelly graduated from Horseheads High School in 2013, and spent the next two years studying in New York City at Cathedral Seminary House of Formation and St. John’s University. While in the Big Apple, he twice met Cardinal Timothy M. Dolan.

From 2015 to 2018, he attended Theological College at Catholic University of America in the nation’s capital. During that period, he participated in several high-profile liturgies at the Basilica of the National Shrine of the Immaculate Conception, including the 2016 funeral of U.S. Supreme Court Justice Antonin Scalia. For that event, he held a vessel of holy water used to sprinkle the casket.

He also met many bishops and archbishops in Washington, often in conjunction with vigil Masses preceding the annual March for Life, and attended Pope Francis’ canonization of St. Junipero Serra there in 2015.

Since 2018, Father Kelly has been studying in Rome, where he’s encountered the Holy Father several more times — including this April 15, when he played a prominent role in the Holy Father’s Good Friday liturgy at St. Peter’s Basilica. First, he was one of the deacons who chanted parts of the passion. Then, for the intercessions, he chanted the introductions to which the pope responded.

Father Kelly had planned to spend Good Friday visiting Spain — but when the Vatican asks you to assist the pope at Mass, “you immediately open up your schedule,” he said with a smile.

Before the Good Friday liturgy, Father Kelly enjoyed a handshake and quick chat with Pope Francis, marking his second face-to-face meeting with the pontiff. He also had been present for the Holy Father’s meeting with the bishops of New York state during their 2019 “ad limina” visit to the Vatican.

“You get enough time for a handshake, a picture and maybe a sentence or two,” Father Kelly remarked.

He said he also met the pope in September 2021 as part of a group of transitional deacons, and has seen the pontiff at a distance several times, including at the canonizations of Ss. Paul VI and Oscar Romero in 2018 and John Henry Newman in 2019.

Journey of a lifetime

Father Kelly earned his baccalaureate degree in sacred theology in 2021 at the Pontifical North American College, and is now is studying at Pontifical Gregorian University from which he’s due to receive a licentiate in canon law in 2024. While in Rome, he has visited a number of historical sites in Italy and other parts of Europe, including the tomb of St. John Vianney in France; a memorial in London, where St. John Fisher, patron of the Rochester Diocese, was martyred; St. Pope John Paul II’s home church in Poland; and the site of the Auschwitz-Birkenau concentration camp, also in Poland.

Father Kelly said he’s astounded at his experiences to date, none of which were on his radar when he opted to enter the seminary.

“It’s all come from saying yes and following Christ,” he said. “Saying yes to the invitation to follow has taken me on a journey of a lifetime, a journey that is only just beginning and only God knows what’s in store.”

“If there’s one thing I’ve learned that I encourage others to do, it’s to continue to say yes,” he added. “If we were to leave things to our own plans and our own designs, we’d be limiting ourselves. But when we say yes to God and his invitations and the plan that he has in store, it will bring us nothing but the greatest joy and fulfillment.”