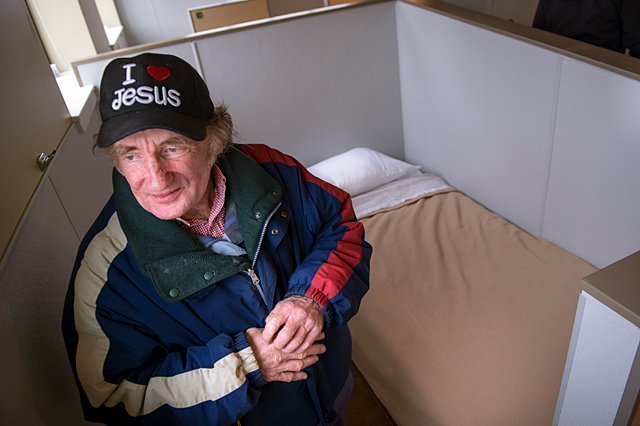 Charlie Lemon looks out the window near his bed at the House of Mercy’s new location on Ormond Street in Rochester March 20.

ROCHESTER — The new House of Mercy homeless shelter is beyond a dream come true for the organization’s founder.

“It’s a gift from God, really a miracle,” said Sister of Mercy Grace Miller. “I never expected this. This is God’s work. I believe in miracles.”

On March 20 the shelter staff moved residents from House of Mercy’s former location at 725 Hudson Ave. to a 16,000-square-foot facility at 285 Ormond St. The new location is more than three times the size of the Hudson Avenue building, which opened in 1994. Prior to that, the House of Mercy had been located at two different sites on Central Avenue. The nonprofit organization marked 30 years of operation in 2015, when a capital campaign for the new shelter kicked off in honor of Sister Miller’s 80th birthday.

A grand opening celebration will be held in ay, she said. 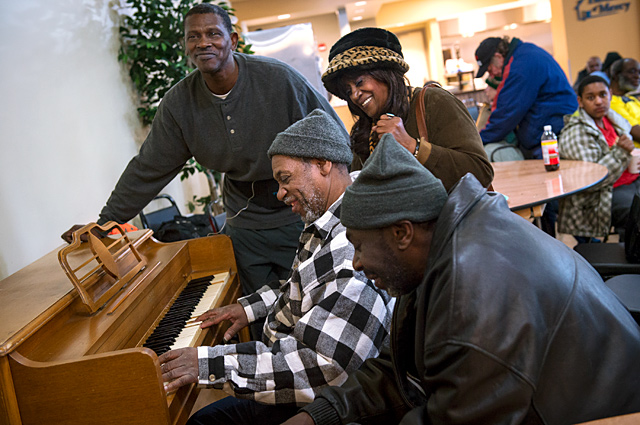 Willie Brown (from rear), Mildred Bartlett, Timothy Clack and Classic Adams sing around the piano March 20 in the dining room of the House of Mercy’s new location on Rochester’s Ormond Street.

The Ormond Street shelter will offer 82 emergency beds in 76 individual pods, a few of which will have bunk beds, explained Kelly Finnigan, director of operations, during a March 8 tour of the new facility. Separate dormitory space is provided for men and women, with a much larger area for men, explained Sister Miller. A raised observation desk sits at the dormitory area entrance.

As she smiled and observed the comings and goings of staff, volunteers and residents adjusting to their new surroundings March 20, Sister Miller said she was sure the shelter would already be near capacity on its first day.

At the new shelter, residents and visitors will enter an open reception area adjacent to a large cafeteria for dining and lounge space. Food will be prepared in a commercial-sized kitchen, Sister Miller said. The basement, which runs the length of the facility, will provide storage for food and other donations, she added. Among those donations was $70,000 worth of frozen foods from two local Target Corp. stores that lost power during a windstorm on March 8, she said. The food was placed in freezers that had been empty.

“Talk about a blessing in the middle of a storm,” said Sister Miller. “We’ve had a lot of … miracles we’ve witnessed here.”

But nothing could beat the reaction of residents upon seeing the new House of Mercy, she said.

“My joy was when they walked in and said they loved it,” said Sister Miller, who added that the shelter will maintain its mission to keep the doors open 24/7 with security provided by staff and volunteers.

Sammy Strong, who has stayed at the House of Mercy on and off over the past several years, said he was thrilled about the showers, which were not available at the former location.

“We’ve come a long way,” added Strong. “I think it (the new building) is wonderful.”

The building was purchased for $210,000 by an anonymous donor, and renovation work began last year. Finnigan said real estate, architectural, environmental assessment, engineering and legal services for the renovation work also were donated or provided at greatly reduced rates by Conifer Realty, Conifer-LeChase, Passero Associates, LaBella Associates and Dollinger Associates. A capital campaign has raised $6.2 million in pledges — exceeding a $5 million goal — according to Tom D’Agostino, the campaign’s director.

“The entire committee is delighted at these outstanding results,” he told the Catholic Courier in an e-mail, noting the committee’s gratitude to the hundreds of people who donated to the campaign.

“The new House of Mercy will provide food, clothing and shelter to thousands of homeless people over the decades to come because of their generosity,” D’Agostino added.

The funds raised through the campaign will cover all of the construction work and materials, equipment, furniture and salary for new staff members, Finnigan said.

Construction projects included building a deck to raise half of the first floor by four feet, Sister Miller and Finnigan explained. The first floor provides office space for staff as well as for the agencies that collaborate with the House of Mercy, such as Empire Justice Center and Catholic Family Center. A chapel next door to the offices will be available for small prayer groups, said Sister Miller, whose office contains a display of photos of the previous three House of Mercy locations.

Volunteers from University of Rochester Medical School and Rochester Regional Health System will staff a health clinic on the second floor, which will remain under construction until June, said Sister Miller. A mobile health unit will also continue to make stops to offer dental services, she said.

The second floor also will provide a conference room for meetings and two apartments for Catholic Workers or other live-in volunteers, Finnigan said.

All of the services at the House of Mercy — including meals, laundry, computer center and tutoring — will be available to anyone who walks through the doors, he added.

“We call ourselves a homeless shelter, but we really are a full-service social-services agency,” Finnigan said.

Shiquain Woods, who is currently living at the House of Mercy, said the project could not have become a reality without Sister Miller.

“Sister Grace is like a second mother to me,” said Woods, who has known Sister Miller since she was a child growing up in the Hudson Avenue area.

A desire to give back being a common thread for many House of Mercy residents, Woods asked Sister Miller what she could do to help on the new building’s opening day.

“So many people came forth generously when they heard we were moving into a new building,” Sister Miller said. “It’s beyond any dream I ever had, beyond every expectation.”