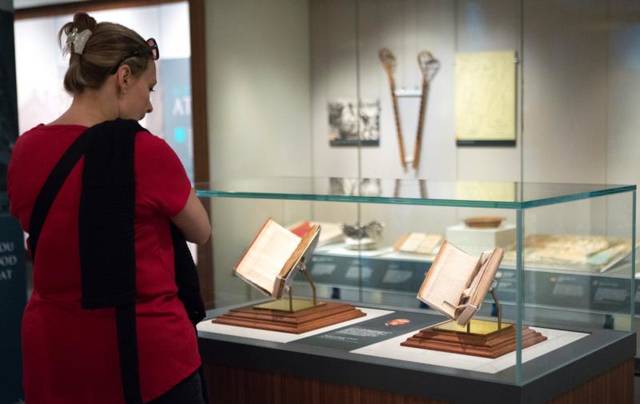 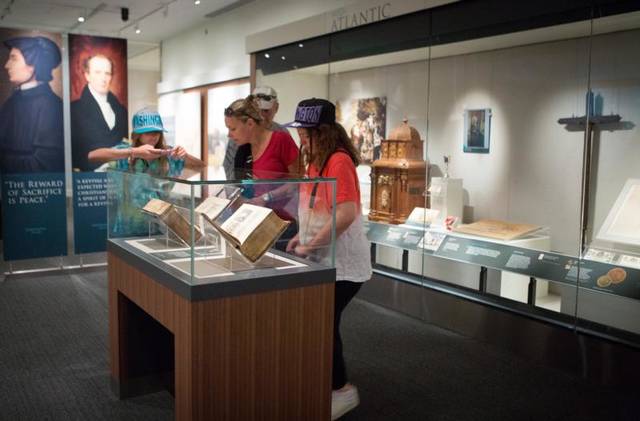 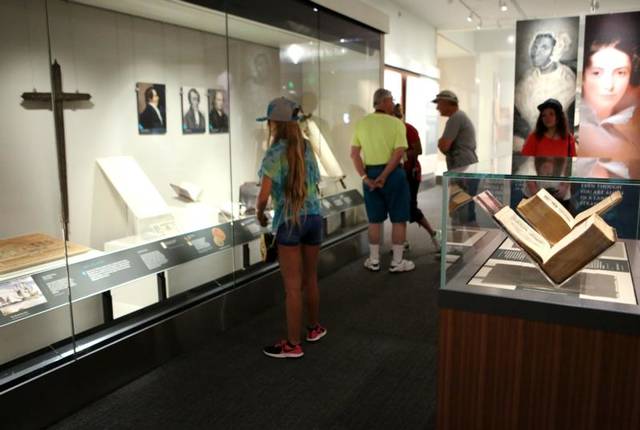 The exhibit features artifacts from Christianity, Judaism, Islam and other major world religions. Peter Manseau, the museum’s Lilly Endowment curator of American religious history, is the author of several books and curator of the new exhibit.

“We can’t really think about the role of religion in America today without wondering about how it all began,” Manseau told Catholic News Service.

The exhibit, which opened June 28, displays artifacts and stories of American religious life from the 1630s to the 1840s. Reflecting the many Christian denominations that made up early America, it also features noteworthy items of Jewish, Islamic, Mormon, Native American and other faith traditions. Visitors from diverse backgrounds will likely find their own religious beliefs represented in the objects.

“The real power is seeing all of these together, and recognizing that these are all part of the same American story,” Manseau said.

Some of the exhibit’s biggest draws are the Jefferson Bible, the George Washington Inaugural Bible, Archbishop John Carroll’s chalice and paten and a church bell forged by Paul Revere. Manseau explained that the Jefferson Bible is an edition of the New Testament that Thomas Jefferson edited himself, removing certain passages while including others.

“He wanted to create a story of the life and teachings of Jesus that was in line with his understanding of the Enlightenment, with his desire to lead a reason-led life,” Manseau said. “So he went through several copies of the New Testament with a penknife in hand and cut out those parts that he agreed with, and glued them together into a new book that he called ‘The Life and Morals of Jesus of Nazareth.’”

Other noteworthy objects include the Communion cup of Gov. John Winthrop of Massachusetts, a Torah scroll damaged in 1776 during the British occupation of Manhattan, a 19th-century Arabic manuscript and an iron cross made by the first English Catholics in Maryland. Pope Francis used this cross at his papal Mass in Washington in 2015.

“According to tradition, it was made by the first English Catholics who came to America on the Ark and the Dove in 1634,” Manseau said. “When they needed a cross to use in their public worship, they took iron ballast beams and had a blacksmith pound them together into a new iron cross that they used.”

Manseau penned the book “Objects of Devotion: Religion in Early America,” which presents images of some of the exhibit’s artifacts and tells stories of religious movements and figures in American history.

The exhibit and book both highlight the influence of the Carroll family on Catholicism in America. Charles Carroll, the only Catholic signer of the Declaration of Independence, became a senator in the newly formed government. His cousin, Archbishop Carroll of Baltimore, became the first bishop in the United States, founded Georgetown University in Washington, and worked to create other schools and religious communities.

Manseau pointed out a chalice on display that belonged to Archbishop Carroll, explaining that such chalices were designed to be taken apart and disguised as a bell when placed on the side of a saddle. Such disguise was helpful to priests at a time when Catholicism was often met with disdain.

“We try to tell the full story of early Catholic experience in America, and we don’t shy away from this early bigotry against Catholics,” Manseau said as he described the purpose of such saddle chalices.

“And so we tell stories like that, but also stories of early Catholic triumphs, such as the building of the Baltimore basilica, again through the leadership of Bishop John Carroll,” Manseau said.

Though many of the Catholic artifacts come from the mid-Atlantic, the exhibit does not organize its items based on religion. Rather, “Religion in Early America” is arranged by region, an approach that displays how America’s beliefs are diverse in location as well as in content. “Rather than presenting this story chronologically, we decided that presenting it regionally would be the best way to show that there was diversity in every part of early America,” Manseau said. “So we have exhibit cases on New England, the mid-Atlantic and the South. In each of those regions there were a number of different religious traditions that were trying to establish themselves to be a part of the public square, and we wanted to show that that happened across time.”

The exhibit does not so much strive to paint a depiction of the everyday early American’s religious life as it emphasizes the diversity characteristic of the United States since the earliest settlers arrived.

“I think that the main takeaway that people have when they come into ‘Religion in Early America’ is that the religious traditions that were present here were far more diverse than many suspect, and that the practical implication of this diversity really was religious freedom,” Manseau said.