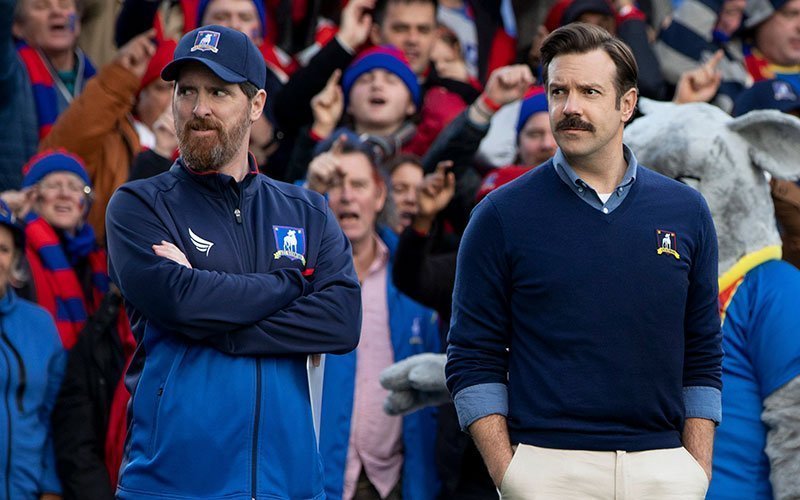 This is a scene from the TV show "Ted Lasso" streaming on Apple TV+. (CNS photo by Apple TV )

NEW YORK (CNS) — Oscar Wilde is generally credited with the famous observation that Britain and America are two nations divided by a common language.

That fact is amusingly explored in “Ted Lasso,” a sports comedy currently streaming on Apple TV+. Three half-hour episodes of the 10-part series are available now, with new installments debuting Fridays through Oct. 2.

Jason Sudeikis stars as the eponymous American football coach, expanding a character featured in promotional videos for NBC Sports’ coverage of U.K. soccer matches. He’s a classic fish-out-of-water, transported from Kansas (like Dorothy Gale) into a mysterious and magical place called, not Oz, but Richmond, a suburb of London.

Turns out that negotiating language differences — soccer is called football, the field is the pitch, tea is both a beverage and a meal, and so on — is the least of Ted’s worries. Despite having never coached soccer, he is hired to run a fictional Premier League club, AFC Richmond, by the team’s new owner, Rebecca (Hannah Waddingham).

Unbeknown to Ted, Rebecca has an ulterior motive. She acquired her ownership in a messy divorce, and as AFC Richmond was her ex-husband’s pride and joy, she is determined to see it decline. Hiring a goofy American coach with zero experience seems just the ticket.

But Ted is a force not to be discounted. Relentlessly cheerful, he is that cockeyed optimist who sees only the good in others, despite overwhelming resistance from indifferent players and rabid fans who chant a rather nasty pejorative in his presence.

Undeterred, Ted reasons, “Taking on a challenge is a lot like riding a horse. If you are comfortable while you’re doing it, you’re probably doing it wrong.”

“For me, success is not about the wins and losses,” Ted tells a skeptical newspaper reporter. “It’s about helping these young fellows to be the best version of themselves on and off the field.”

Is “Ted Lasso” too good to be true, that rare bright spot in a television universe otherwise frequently dark and cynical? Yes and no.

Unfortunately, a small army of writers (including Sudeikis) adds a thick layer of crude and profane language and sexual banter to the dialogue. Such talk is presumably meant to bolster the comedy, but it comes across as discordant and gratuitous. Consequently, what should be a wholesome and fun series for the entire family to enjoy can only be recommended for a relatively small number of adults.

In football terms, then, “Ted Lasso” counts as a draw.