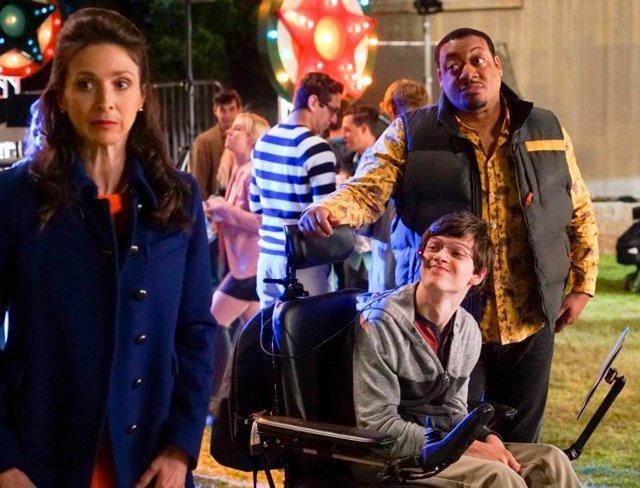 Marin Hinkle, Micah Fowler and Cedric Yarbrough star in a scene from the ABC series "Speechless."
NEW YORK (CNS) — As broadcast television launches its new season this month, viewers will encounter three new shows that tackle, directly or indirectly, matters of life, faith and the battle of good versus evil. Based on the first episodes available to preview, two of the programs show promise.
“Speechless,” Wednesdays, 8:30-9 p.m. EDT (ABC) beginning Sept. 21
Unwrap this unconventional, at times manic, family comedy and you will discover a pleasant surprise: a profoundly pro-life message about tolerance and respect for those with special needs.
J.J. (Micah Fowler), the eldest child of the DiMeo family, has cerebral palsy. He is confined to a wheelchair and is indeed speechless, communicating by pointing a stylus to words and letters on a computer screen. He’s also a nerdy, goofy teenager, much like his siblings Dylan (Kyla Kennedy) and Ray (Mason Cook).
Firmly in J.J.’s corner are his parents, the redoubtable Maya (Minnie Driver) and the more passive Jimmy (John Ross Bowie). Maya insists the family move to a new town where the public school has more resources for kids like J.J. This means an adult companion who will verbalize his opinions in class and among his peers.
As this tiger mom takes no prisoners, “Speechless” pokes fun at insensitive language and access barriers. Some salty words and innuendo do not diminish this rare and inspiring portrayal of a family united in love and purpose despite monumental obstacles.
“The Good Place”: two-episode series premiere Monday, Sept. 19, 10-11 p.m. EDT (NBC), then moves to Thursdays, 8:30-9 p.m. EDT (NBC), starting Sept. 22
This silly comedy represents Hollywood’s latest take on the afterlife. Instead of heaven and hell, with purgatory in-between, we have the “Good Place” and the “Bad Place.” Your eternal assignment depends entirely on the sum total of good works performed while on earth.
Needless to say, you don’t want to wind up in the Bad Place.
Eleanor (Kristen Bell) arrives in the Good Place, where her guide is the Overseer (Ted Danson). Not surprisingly, it looks a lot like Main Street in Disneyland, candy-colored storefronts and verdant neighborhoods where everyone is happy and eats frozen yogurt.
Trouble is, Eleanor is not supposed to be there. A clerical error has bumped her upstairs, instead of downstairs, as her life on earth was less than exemplary. Desperate to remain, she enlists the help of her designated soul mate, Chidi (William Jackson Harper), to teach her how to be a better person.
Viewers looking for the slightest mention of the divine in “The Good Place” will be disappointed. Church teaching dictates that good works alone won’t get you into the real heaven; they must be paired with faith in God and his saving grace.
“The Exorcist,” Fridays, 9-10 p.m. EDT (Fox) beginning Sept. 23
William Peter Blatty’s 1971 novel about demonic possession inspired a 1973 film as well as radio and stage adaptations. Now comes a weekly TV drama for a new generation, the tale of two Catholic priests and a titanic clash of good versus evil.
Father Marcus Keane (Ben Daniels) travels the world performing exorcisms, but his limited success has left him demoralized. Meanwhile, in Chicago, a charismatic young priest, Father Tomas Ortega (Alfonso Herrera), juggles a crumbling inner-city parish with his own doubts about his vocation.
Enter Angela Rance (Geena Davis), one of Father Tomas’ parishioners. She is convinced a demon has entered her home and possessed her withdrawn daughter, Katherine (Brianne Howey), who is reluctant to leave her bedroom.
Nonsense, Father Tomas tells her: Demons don’t exist, they were invented by the Catholic Church to explain phobias and disorders. At that moment, a raven crashes through his office window, splattering blood on his Bible.
Needless to say, gory incidents like this, coupled with a peculiar psychic connection to Father Marcus, make a fast believer out of Father Tomas. Convinced that God is calling him to do good and help the Rance family, he joins forces with his fellow priest.
Based on the first episode, “The Exorcist” offers a timely reminder of the reality of the devil and the presence of evil in the world. Its seriousness of tone may be just the wake-up call secular-minded viewers require.
– – –
McAleer is a guest reviewer for Catholic News Service.
Copyright © 2022 Catholic News Service, Inc. All rights reserved. Linking is encouraged, but republishing or redistributing, including by framing or similar means, without the publisher's prior written permission is prohibited.