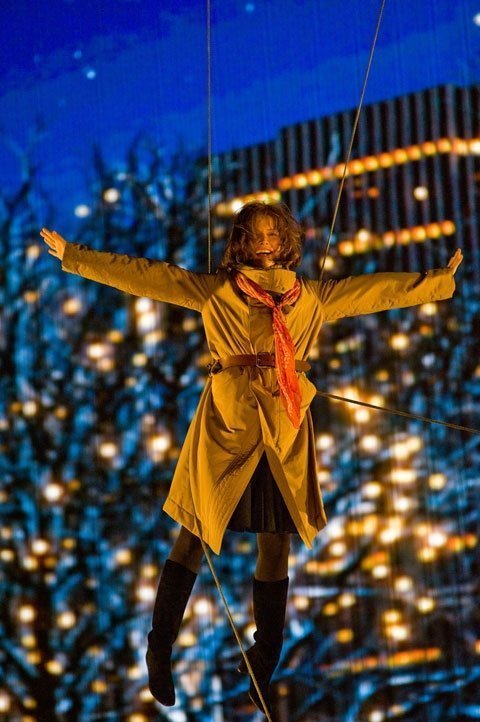 Reuniting for a follow-up to 2010’s "Valentine’s Day," director Garry Marshall and screenwriter Katherine Fugate weave a web of love stories largely free of the moral tangles that marred their earlier collaboration. A few one-liners aside, though, the humor falls flat, while the script’s strained effort to transform Dec. 31st into a kind of secular High Holy Day is simply irritating.

Part of the problem may be that there are just too many thin characters on screen — with too little time devoted to any one of them — for viewers to form sympathetic connections.

The movie tracks the intersecting paths of Claire (Hilary Swank), the executive in charge of the titular holiday’s iconic celebration in New York’s Times Square; a rock star called Jensen (Jon Bon Jovi) who’s headlining the evening’s entertainment there; Laura (Katherine Heigl), the up-and-coming caterer to whom the rocker was once engaged; and Elise (Lea Michele), one of Jensen’s backup singers who finds herself trapped in an elevator for hours with Randy (Ashton Kutcher), a New Year’s-averse slacker.

Also thrown into the mix are Robert De Niro as a dying hospital patient, Halle Berry as his faithful nurse, Michelle Pfeiffer as an inhibited middle-age office worker out for adventure and Zac Efron as the free-spirited bike messenger she enlists to help her find it. And that’s not even mentioning the pair of married couples — played by Jessica Biel, Seth Meyers, Sarah Paulson and Til Schweiger — aggressively competing for the $25,000 prize awarded to the first baby born after midnight.

Yet another story line, this one revolving around the mother-and-daughter duo of Kim (Sarah Jessica Parker) and Hailey (Abigail Breslin), demonstrates the noticeable — and welcome — shift in tone between Marshall and Fugate’s previous offering and this one.

In last year’s outing, two 18-year-old high school students spent Valentine’s Day plotting to relieve each other of their virginity. Here, by contrast, Hailey’s rebellion against overly protective Kim is sparked by the 15-year-old’s desire to obtain her first kiss from a classmate.

The innocence of Hailey’s persona is more than a little undercut, however, when, during an argument with Kim, she raises her blouse in the middle of a crowded Grand Central Terminal to reveal her bra, loudly reminding her mother, as she does so, that the garment in question is not of the training variety.

Also showing that the filmmakers have not entirely abandoned their old ways is the minor figure of a frisky grandpa. He pops up in still another plot pod, this one concerning a young record industry mogul portrayed by Josh Duhamel. As Gramps’ family helps Duhamel’s character return to the Big Apple after a minor car crash in the wilds, the less-than-staid patriarch evinces a prurient interest in their passenger’s sex life.

The old-guy-talking-dirty gambit, needless to say, fizzles like inferior champagne. As for the attempt to celebrate year’s end as an opportunity for mutual forgiveness and fresh dreaming, it’s as strident as a noisemaker and achieves a similarly jarring effect.

The film contains some sexual references and humor, at least one use of the F-word as well as occasional crude language and crass slang. The Catholic News Service classification is A-III — adults. The Motion Picture Association of America rating is PG-13 — parents strongly cautioned. Some material may be inappropriate for children under 13.