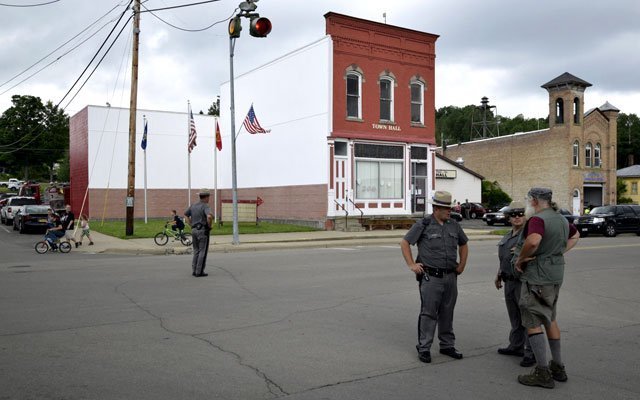 New York State Police are seen on a street in Friendship, New York, June 21. Law enforcement officials are engaged in a manhunt for convicted murderers Richard Matt and David Sweat, who escaped June 6 from a maximum security prison in Dannemora, N.Y.

CADYVILLE, N.Y. (CNS) — Fewer people were filling the pews at St. James Church in the Plattsburgh hamlet of Cadyville after two convicted killers escaped June 6 from the Clinton Correctional Facility.

"We have a lot of parishioners that work in the prison," Msgr. Lawrence Deno explained. "They had to work overtime."

And others, as the massive manhunt for David Sweat and Richard Matt moved through field, swamp and forest a short distance away, "couldn’t get to Mass because they were not allowed to leave their homes."

Msgr. Deno got the same robocall from the U.S. Department of Homeland Security that those in the main search area did five nights into the manhunt, instructing residents to lock their doors and put on outside lights.

But other than the passage of helicopters overhead and a larger State Police presence in the in town, he saw little of the excitement.

However, some parishioners, Msgr. Deno said, live right in the heart of the area searched most intensively for several days.

"Some of them were a little anxious," he told the North County Catholic, newspaper of the Diocese of Ogdensburg. "A lot of people said they had never locked their doors before."

And some parishioners told him bloodhounds had picked up the scent of the fugitives right behind their homes.

Sweat, 35, was sentenced to life in prison without parole for the 2002 killing of a Broome County sheriff’s deputy.

Matt, 48, who had earlier murdered an American businessman in Mexico, was extradited from jail in that country to the United States to stand trial for killing and dismembering a former employer in Tonawanda. His sentence is 25 years to life.

By late June 22, they had not been apprehended, but police were focusing efforts on the hamlet of Bellmont in far northern New York after some items recovered from a hunting cabin seemed to be linked to the escapees.

More than two weeks earlier, with the alleged help of Joyce Mitchell, a supervisor in the tailor shop of the Dannemora prison, and perhaps others, the inmates acquired the tools necessary to cut holes in the steel walls of their cells and then a steam pipe in the bowels of the maximum-security prison.

Clinton County District Attorney Andre Wylie said it appears they explored the tunnel system below the prison for several weeks before making their escape through a manhole on a street in the village of Dannemora, which sits just two blocks from the prison’s high wall overlooking state Route 374.

St. Joseph’s Church is just a block over from the street with that manhole.

The church was subjected to a search, and likely more, as was "every building in Dannemora, occupied and unoccupied," according to State Police Trooper Jennifer Fleishman, a public information officer.

And correction officers who worship there also were pulling extra shifts to assist with the hunt.

On the grounds of the St. James Parish rectory, the manhunt put the brakes on preparations for the 50th annual Cadyville Field Day, hosted by the Cadyville Volunteer Fire Department.

It had been set for June 14, but was canceled the day before, with organizers citing the manhunt and how bringing a huge influx of revelers for the parade and other events would interfere with that operation.

"The carnival had been set up on the grounds, food had been purchased," said Msgr. Deno, who was sorry the fundraiser had to be canceled. "The Fire Department worked on it a long time (to prepare)."

Another necessary inconvenience were the roadblocks set up at several points, he continued.

"Many said they were late for Mass because their (cars) were stopped and searched," he said.

St. James’s pastor got his own taste of that.

Driving to visit a parishioner, he was slowed by four roadblocks there, then four on the way back to the rectory. That was over three miles one way, he noted.

Bishop Terry R. LaValley of Ogdensburg presided over confirmation at Church of the Assumption in the Saranac hamlet of Redford on the morning of the escape from the nearby Dannemora prison.

Father John Demo, St. Joseph’s pastor, asked if he’d had to contend with any roadblocks on the way.

The bishop told him no.

"But I found that out when I was leaving," he said.

The bishop said he did get a note from someone who expressed concern that attendance at Masses had been down. "They couldn’t get to church," Bishop LaValley said.

Msgr. Deno was pleased that life seemed to be returning to normal — at least the roadblocks were gone and closed roads opened again.

And he had a brief moment of fame when a reporter from the London Evening Standard, one of many national and international journalists to flood the area, interviewed him.

He wasn’t too sure how that went, though.

"I couldn’t understand his brogue," the monsignor said, chuckling.

Moore is a staff writer at the North County Catholic, newspaper of the Diocese of Ogdensburg.