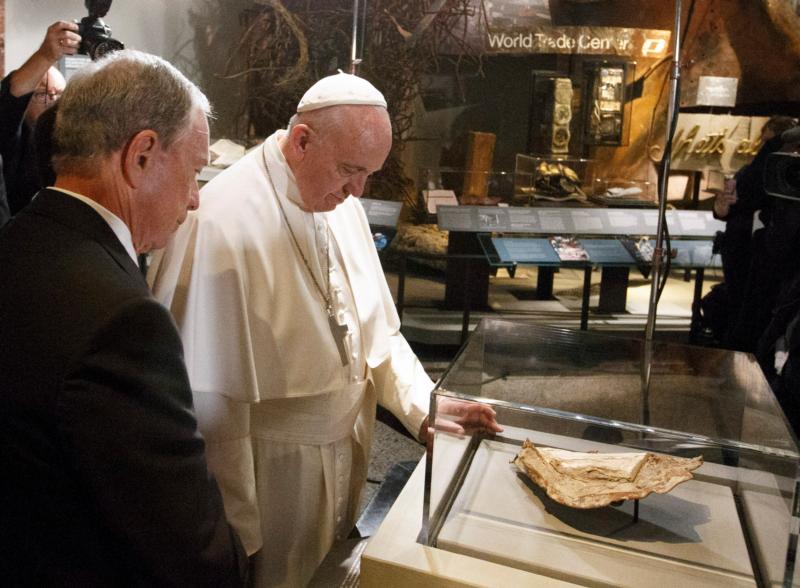 In this 2015 file photo, Pope Francis looks at a Bible fragment found in the rubble following the Sept. 11 terrorist attack in lower Manhattan. (CNS photo by Paul Haring)

WASHINGTON (CNS) — A religion professor from New York is one of 22 recipients of a federal $60,000 grant for scholars and writers that will allow her to study and write about Catholic families affected by the terrorist attacks on Sept. 11, 2001, in New York City.

Julie Byrne, associate professor of religion at Hofstra University in Hempstead, New York, was named as one of the National Endowment for the Humanities’ Public Scholars Aug. 8, allowing her to delve into how the event affected Catholic communities whose members worked in New York City, but had moved to live in its suburbs and how that first generation of white-collar workers vanished in one day.

“I was hoping there would be a way to tell these stories” and give voice to the 9/11 experience for a wide swatch of Catholic communities affected by the attacks, said Byrne in an Aug. 22 telephone interview with Catholic News Service.

Catholic communities in the tri-state area of New York, New Jersey, and Connecticut suffered great losses, not just of white-collar employees at financial firms at the World Trade Center towers, but of first responders who helped during the tragedy, she said.

The loss of life of Catholics in the event was significant, she said, and it greatly affected the population they left behind, who had seen their families and communities advance from union workers and tradespeople and into white collar jobs that gave them greater social mobility as a community. She said she will look at what it meant, not just for families but for the whole demographic and “what it meant to lose that person” that carried the family narrative into a different direction and “have it turn into something so tragic.”

“It’s not talking so much about the Catholic religion but about Catholics themselves,” she said.

The federal grants help scholars and other writers focus on scholarly nonfiction books but their subject matter has to be of interest to a wider audience.

Byrne’s book will focus in part on the upcoming 20th anniversary of the attacks.