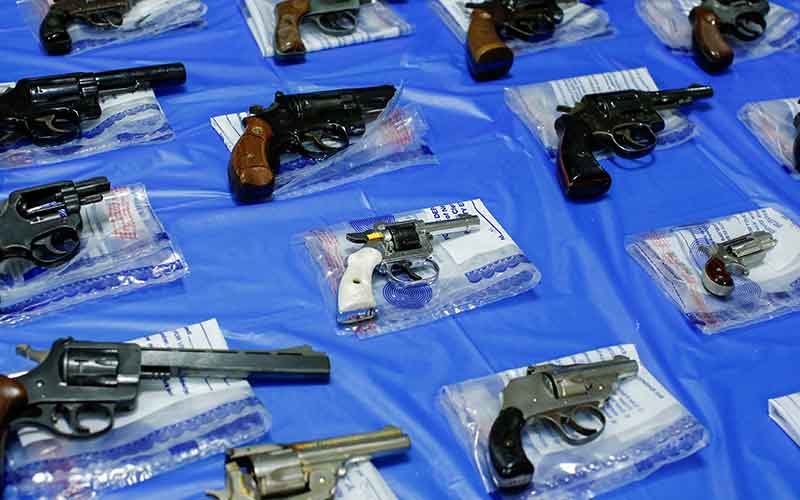 Guns are displayed in the Queens borough of New York City June 12, 2021, after a gun buyback event organized by the New York City Police Department. In a decision issued June 23, 2022, the U.S. Supreme Court ruled 6-3 to limit state and local governments from restricting people's ability to carrying guns outside the home. (CNS photo by Eduardo Munoz/Reuters)

WASHINGTON (CNS) — An official of the New York State Catholic Conference expressed disappointment with a June 23 U.S. Supreme Court ruling that overturns a century-old law and asserts that there is a constitutional right to carry a handgun in public for self-defense.

“We are troubled that the court has overturned a law dating back more than a century that has been largely accepted by the state’s population for all of that time,” said Dennis Poust, executive director of the conference, which represents the New York bishops on public policy matters.

“The duly-elected members of the state Legislature could have at any time over the past 110 years revisit its policies on how it licenses individuals for the purpose of carrying concealed handguns outside the home if it was the will of the citizens of the state. It’s regrettable that the U.S. Supreme Court has now chosen to step in to do so,” Poust said in a statement.

The court voted 6-3 to strike down the New York law requiring anyone who wants to carry a concealed weapon for self-defense to demonstrate a specific need for doing so.

The court’s ruling follows recent mass shootings in Uvalde, Texas; Buffalo, New York; and elsewhere in which dozens of children and adults have been killed or injured. The incidents have led to an outcry of support for wide-ranging gun control measures.

Writing for the court’s conservative majority, Justice Clarence Thomas referred to an earlier court ruling while explaining that “the constitutional right to bear arms in public for self defense is not ‘a second-class right, subject to an entirely different body of rules than the other Bill of Rights guarantees.’

Following the Supreme Court’s ruling, both chambers of Congress passed the first significant new gun restrictions since the 1994 assault weapons ban. The Bipartisan Safer Communities Act was approved 65-33, with 15 Republican senators joining all 50 Democratic senators to pass the legislation June 23.

The House of Representatives followed June 24, approving the bill 234-193, with 14 Republicans joining the Democrats to adopt the measure.

President Joe Biden pledged to sign the bill as soon as it reached his desk.

“This bipartisan legislation will help protect Americans. Kids in schools and communities will be safer because of it,” Biden said in a statement released by the White House after the Senate vote.

After the votes in Congress, Archbishop Paul S. Coakley of Oklahoma City, chairman of the U.S. bishops’ Committee on Domestic Justice and Human Development, welcomed passage of the bill, saying it “will take meaningful action to prevent gun violence and protect lives.”

Archbishop Coakley and the chairmen of three other U.S. Conference of Catholic Bishops committees sent another letter to members of Congress June 23 calling for passage of the bill. It was the second such letter in June from the chairmen urging the adoption of “reasonable gun control measures.”

The court’s three liberal members voted to uphold the New York law. In a dissenting opinion, Justice Stephen Breyer noted that more than 270 mass shootings have occurred since January and that data shows gun violence is now the leading cause of death of children and teenagers.

The majority ruling will make it more difficult for state legislators to act to prevent gun violence, Breyer wrote in an opinion joined by Justices Sonia Sotomayor and Elena Kagan.

The New York bishops, Poust said, welcomed Justice Samuel Alito’s concurring opinion that the court’s ruling “decides nothing about who may lawfully possess a firearm or the requirements that must be met to buy a gun,” nor does it “decide anything about the kinds of weapons that people may possess.”

Poust added that “this decision does not appear to slam the door in any way on licensing requirements, age restrictions or assault weapons bans.”

“We are happy to support efforts by Gov. Kathy Hochul and the Legislature to pass new legislation that will meet constitutional muster with the Supreme Court,” Poust said.