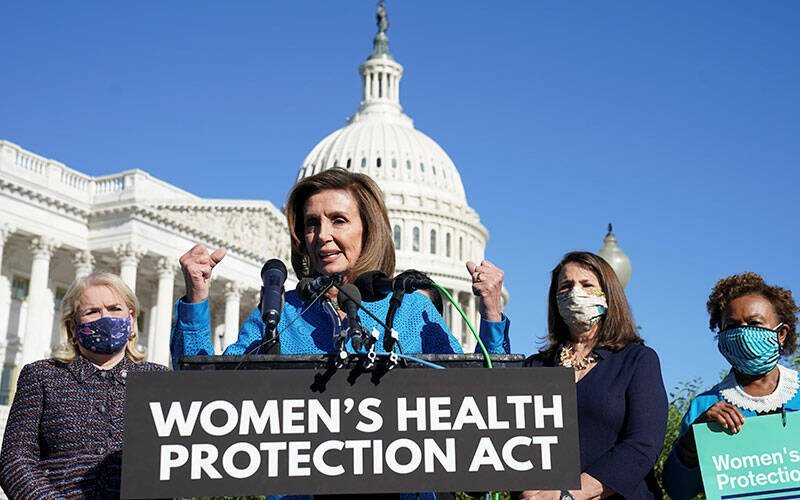 House Speaker Nancy Pelosi (D-Calif.) speaks during a news conference on Capitol Hill in Washington Sept. 24 about the Women’s Health Protection Act, which establishes a legal right to abortion in all 50 states under federal law. The measure passed in a 218-211 vote. (CNS photo by Kevin Lamarque/Reuters)

Bishop Salvatore R. Matano and the other seven Catholic bishops of New York state have called on New York Senators Kirsten Gillibrand and Charles Schumer to join them in opposing the federal Women’s Health Protection Act of 2021.

The bishops said this legislation would remove many restrictions that currently limit abortion and would cause harm to mothers, infants and health-care professionals.

The Women’s Health Protection Act — S. 1975 and H.R. 3755 — was introduced June 8 in the U.S. Senate and House of Representatives. The legislation “would impose upon the entire nation a policy of unrestricted abortion on demand, for any reason, at any point in pregnancy, going well beyond the parameters of Roe v. Wade and subsequent Supreme Court decisions,” the bishops stated in their jointly signed Sept. 29 letters to the senators.

This bill would codify the 1973 Supreme Court decision in the landmark case Roe v. Wade, which legalized abortion throughout the United States. The Women’s Health Protection Act would establish under federal law a woman’s right to obtain an abortion without various limitations that have been enacted by individual states. According to Catholic News Service, some of these limitations include:

• requirements to provide women seeking abortions with information about fetal development and alternatives to abortion;

• waiting periods before abortions may be procured; and

• laws requiring abortions to be performed only by licensed physicians.

In 2019, New York state eliminated a number of its own limitations — including restrictions on late-term abortions, protections for infants born alive, and protections against unwanted or coerced abortions — with the passage of the Reproductive Health Act, which the state’s bishops also opposed.

Yet other states still maintain limits on abortion by allowing parents to be notified if their minor daughters are considering the procedure, prohibiting state taxpayer funding of abortions, and requiring health and safety regulations in abortion clinics, according to the bishops’ letter.

“All of these policies are allowable under Roe and subsequent cases,” the bishops wrote. “Yet all such policies would be invalidated in one fell swoop by the Congressional passage of S. 1975. This authoritarian federal overreach undermines the will of the people through their elected state representatives, and does not bode well for our democracy.”

In their letter, the bishops acknowledged that the senators’ views on abortion policy are “radically disparate” from their own.

“Nevertheless, we believe we have an obligation to speak out as a voice for the unborn, as well as for pregnant mothers who deserve so much more than this bill offers them. This legislation sends a message to women that abortion is their only option and their best hope, that it is something to be promoted and celebrated,” the bishops wrote.

The proposed legislation could also nullify New York state laws protecting health-care professionals who do not want to be involved in abortions, “a law which so many rely upon to exercise their moral values and religious freedom,” the bishops said.

“The truth is that abortion is something to be mourned, and it is often the most agonizing decision a woman will ever make. We believe our government should be offering pregnant women all of their options and the support services they need to empower them to choose to carry their babies to term, raise their families with dignity, or offer their child to a home which can appropriately and lovingly care for that child. Our public policies should reflect those priorities,” the bishops wrote.