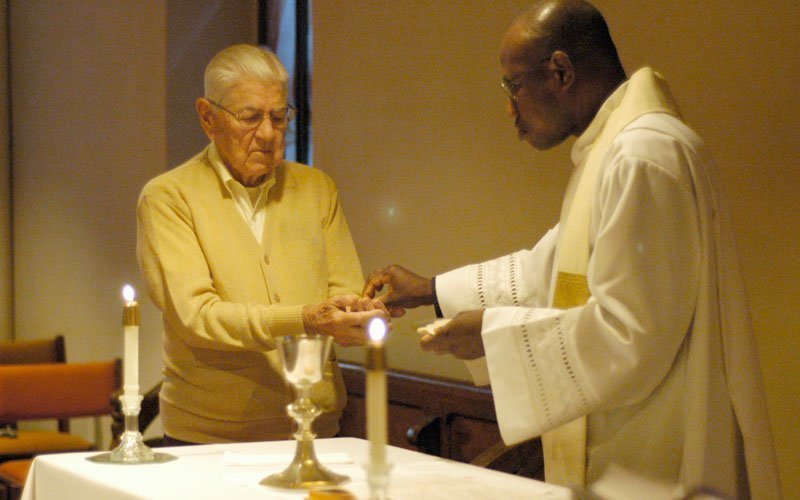 Joe Monahan just had to laugh a few years ago when he read a newspaper article about an altar server in another diocese who retired from his duties in his early 80s.

“In the article, he said he felt like he was the oldest altar server out there. I kind of chuckled,” Monahan said.

Monahan, who turned 87 last March, has been volunteering as an altar server at St. Michael Parish in Newark for the past 14 years and said he has no plans to retire anytime soon.

“It’s been a long stretch but a good one,” he said.

After retiring from his full-time job Monahan began attending daily Mass at his home parish in New Jersey as a way of thanking God for the blessings he’d received thus far in his life, especially his two children, 10 grandchildren and six great-grandchildren.

“I finally came to the conclusion, God’s been pretty good to me, and the least I can do is get myself out of bed in the morning and go. It’s a little something I’ll do,” he recalled.

When Monahan’s wife passed away, his son and daughter — who live in Newark and Rockland County, respectively — urged their father to consider relocating.

“They asked me to think about moving closer to one of them. I always liked living in the country, so I moved up here instead of to Rockland County. I’ve lived here 15 years,” Monahan said.

After his move to Newark Monahan continued his habit of attending daily Mass. During the spring, summer and fall there always seemed to be plenty of adult altar servers available to help the priest, but “when the good old Rochester winter weather came, nobody ever showed up,” Monahan noticed.

He didn’t like watching the priest trying to take care of everything by himself, so Monahan decided to step up to the plate. In the 14 years since he began serving at St. Michael, he’s worked with four different priests and even led the training of young altar servers for several years.

“If you do it every day of the week, it’s an easy thing to do,” he said. “It’s kind of an honor to be able to assist with the priest at Mass.”

Serving at Mass has been very fulfilling and has provided him with another way of giving thanks to God, he said.

“I thank God a lot for all the good things he gives me. (Serving) is a way you can do something to pay God back for all you’ve got in life,” he said.

Nonetheless, he admits there are mornings when it’s hard to get up early and leave the comfort of his bed. Daily Mass at St. Michael currently is held at 8 a.m., but in previous years it was held as early as 6:45 a.m. Monahan usually arrives at the church 30 minutes before Mass begins to prepare the altar and light the candles.

“I figure you’ve got to make some sacrifices,” Monahan said. “The hardest part is getting up in the morning. It’s a little tough getting up on winter mornings when it’s cold. I just close my eyes, get out of bed and go.”

Monahan has developed more aches and pains as time goes on, but he doesn’t let that prevent him from serving at Mass. He is, however, always on the lookout for new altar-server recruits. Until recently he shared his duties with another gentleman several years younger than himself. He always thought this man would take over if for some reason Monahan could no longer regularly serve, but the man passed away several months ago.

Monahan was a little worried about not having someone to share his responsibilities with, but those fears were soon put to rest when another parishioner asked Monahan to teach him to serve at Mass.

When he’s not serving at Mass, Monahan keeps busy by walking his dog, Riley, and taking care of his house and garden. He lives alone and enjoys having the freedom to do whatever he pleases. He plans to keep serving and thanking God for his blessings until he’s forced to stop.

“I have no complaints. I have aches and pains and when I start to move around they go away, so I have nothing to complain about,” he said.