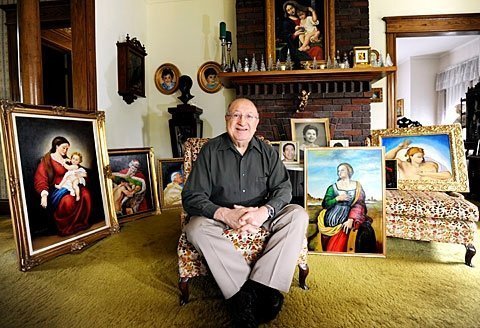 Frank Scalise, 81, an artist and a member of St. Michael Parish in Newark, is surrounded by his work in his Newark home May 17.

Frank Scalise was a young boy when World War II broke out in Europe, and he was fascinated by the warplanes of the time and the brave pilots who flew them.

"I wanted to be a test pilot in the Air Force. I was in the fifth and sixth and seventh grades and I was drawing pictures of airplanes. I loved to draw," Scalise recently recalled.

Scalise, now 81, didn’t end up joining the Air Force, but he did pursue his love of drawing. That passion eventually led Scalise to take up painting as a teen, and he’s been painting and creating art ever since. On May 22 he hosted an art show in his home for his fellow parishioners at St. Michael Parish in Newark.

Fellow parishioner Monica Brunner urged the artist to hold the art show because she wanted other parishioners to see how talented Scalise is, she said. Brunner met Scalise several years ago through St. Michael’s Rosary Altar Society and the two became fast friends. Brunner said she always knew Scalise was an artist, yet she was completely blown away when she stepped into his house two years ago and saw his work.

"It was unbelievable. I think it’s amazing," she said.

Once she’d seen how talented Scalise was, Brunner began thinking of ways to share his talents with others in the Newark community.

"If I see (someone) has a gift, I like to bring it out," she explained.

Many parishioners had seen Scalise’s work before, although they may not have realized it. He has been active in St. Michael Parish since 1965, when he married his wife, Betty, who passed away in June 2009. He often paints signs for parish events, and a few years ago he repainted the parish’s Stations of the Cross at the request of then-pastor Father Mark Brewer, he said.

"They had been painted a buff color. They just weren’t dramatic. I was able to put color in, brighten them up a little bit," Scalise said.

A few years earlier, in 2005, the church also displayed a portrait Scalise had painted of Pope John Paul II. Portrait painting is one of the artist’s specialties, and he said his subjects often are surprised to see how accurately he captures their likenesses. Scalise enjoys listening to his portrait subjects’ exclamations of disbelief when he unveils their portraits.

Scalise has spent most of his life as both a painter and an engraver, and he started out in both professions while he was still in high school. He never took any art classes in school, but he began painting when he was 15 or 16. He studied the works of the great Renaissance masters Raphael, Michaelangelo and Leonardo da Vinci, and learned their techniques by replicating their masterpieces.

"They were geniuses. To reproduce their work is very difficult. It’s a challenge to paint those beautiful folds (of fabric) and differences of the skin tones," Scalise said.

Scalise prefers oil paints, although he’s also used watercolors and pastels, and even tried his hand at sculpting. Although he’s been painting for decades, he still finds replicating the works of the Renaissance masters to be an enjoyable challenge.

"It isn’t like falling off a ledge. It’s hard work. I don’t know anybody who paints these old masters," he said.

Although Scalise has been painting for more than 60 years, it has never been his full-time job. He started working at S.A. Gilbert Jewelers in Geneva when he was just 14 years old, and there he learned the fine art of hand-engraving watches, jewelry and the like. He worked there until 1948, when he left to open his own jewelry store in Geneva.

"I had spent five years with Mr. Gilbert, and his sons were coming back from the service. When I told him I wanted to leave to open up a store for my own, he didn’t give me any argument," Scalise said.

Scalise owned jewelry stores in Geneva and Canandaigua until his retirement in 1995. He left his engraving bench for two years during the Korean War, when he was shipped to Germany and served as an infantryman. On his first day back from Germany Scalise sat down at his workbench and put in a full day’s work, as if he’d never left.

"It was like riding a bike; I guess you never lose it," he said.

Although he’s officially retired Scalise is still something of a freelance engraver, and local jewelers often call on him for engraving jobs.

"I didn’t think I’d be doing engraving at this age. It’s a very difficult thing to do," Scalise said. "Engraving is a very precise thing. If you slip you can ruin something."

Perhaps that’s why Scalise keeps a crucifix next to his work bench, and he starts each job with a prayer. He asks God to guide his hands, whether they’re painting or engraving that day.

"Most of the work I do is inspired by God, and I pray a lot and always ask God to help me," he said. "He always seems to come through."