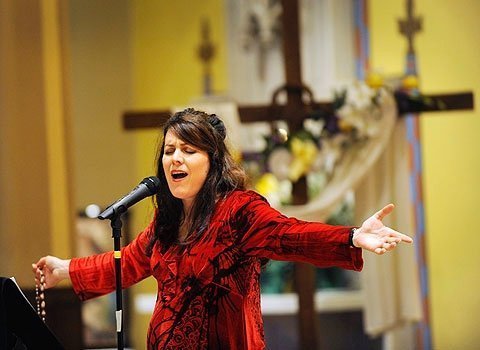 If there’s any truth to the oft-quoted notion that singing is praying twice, then there were an awful lot of prayers coming from St. Michael Church in Newark on April 15.

Dozens of people gathered at the church that day — Divine Mercy Sunday — to hear Catholic contemporary recording artist Donna Cori Gibson perform in concert. The singer had performed at St. Michael two years ago and had been a hit with parishioners, said Jeanette Housecamp, youth minister at St. Michael.

"We brought her back because she’s just incredible," Housecamp said.

Prayer is the foundation for Gibson’s music. She draws the inspiration for her songs from the prayers of well-known saints and from prayers found in Scripture, and she often quotes those prayers word for word in her songs.

"If it’s a popular prayer and it can lend itself to music then I’ll go ahead and see what I can do," Gibson told the Catholic Courier.

When the prayers are put to music they become much easier to remember, said Carleen Pierce, one of Gibson’s fans at St. Michael Parish. Gibson’s 2002 album, "Prayers of the Great Saints," is one of Pierce’s favorites, and praying those saints’ prayers has become a part of her daily routine, she said.

Gibson uses her music to help explain the Catholic Church’s teachings and truths, and she provides a good way to help children and teens learn about their faith and learn to pray, Pierce said.

"By putting it to music she brings the kids and the younger folks back into the church. That’s how they learn," she said.

Gibson, 44, has been singing professionally since she was 17, and she’s focused exclusively on Catholic music since the mid-1990s. Although she grew up in a Catholic home and as a child went to church most Sundays, her family hadn’t prayed together at home, with the exception of occasional prayers before holiday meals. She joined her parish’s youth group as a teenager, but after high school her faith was not a big part of her life. That changed, however, when she was about 23. She was a professional singer, songwriter and studio musician, yet wasn’t happy with her life.

"I was doing it my way and life wasn’t working out my way, so I decided I’m just going to do it God’s way," Gibson recalled. "Then I had to learn more. What is God’s way? I never had God really close before. He was always a big, out-there-somewhere God."

Learning more about Marian apparitions and messages helped Gibson feel closer to God, and several years later she met her husband, Matthew, while on a pilgrimage to Israel. After she and Matthew married she gave up her music career and moved from New York City to Seattle. While attending a Marian conference 17 years ago, Gibson was inspired to relaunch her music career and focus on singing prayers.

"I started really small, just producing my own music. I just put my prayers to music and sang them," Gibson explained.

Gibson made 1,000 copies of that first album in 1995 and expected them to sit in her garage for the rest of her life, but to her surprise people not only bought the album, but clamored for more. While out promoting that first album, "Prayers From Heaven and To Heaven," someone asked Gibson if she could sing the rosary, and that was the inspiration for her second album, "Our Lady’s Musical Rosary," which also was released in 1995. Another album, "Divine Mercy Prayers," was released in 2000.

She sang songs from that album during her April 15 performance at St. Michael. She’s also released a Christmas album, two albums about the Catholic faith and an album focused on unity. Gibson views her music as a ministry, not a career.

"Every concert is a prayer, and every person that I meet is a ministry," she remarked.

Gibson hopes her music provides an alternative to secular music that distracts Catholics from their one true goal, which is to love God with all their mind, heart, soul and strength, she said.

"Anything that takes us off that goal, it’s a distraction and that’s what Satan wants," Gibson said. "Keep your mind on the goal, and don’t be lukewarm. In everything that you do, be hot for God, and don’t be distracted from your goal."

EDITOR’S NOTE: To learn more about Donna Cori Gibson or download one of her songs for free, visit her website, www.donnacorigibson.com.