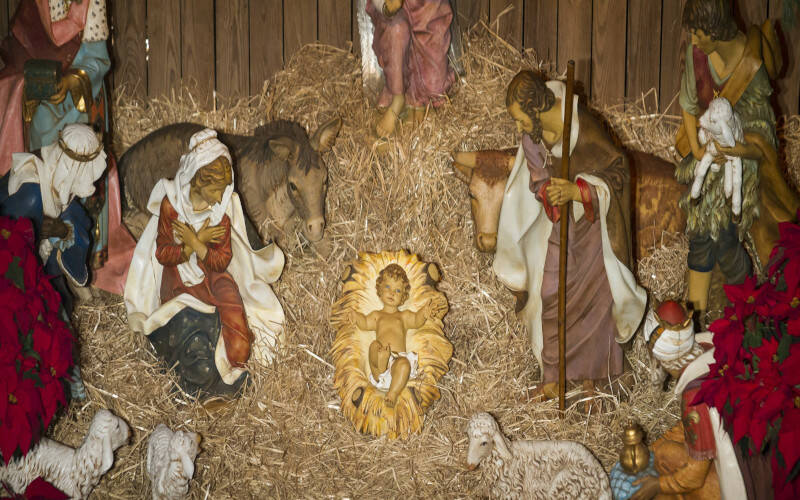 The Christmas decorations in Robin and Jamie Swann’s yard incorporate a little bit of everything. There are the traditional decorations, of course, such as candy canes and a lighted reindeer pulling a sled filled with gifts.

There’s also a place in the Swanns’ yard for somewhat less traditional options, such as an inflatable panda bear and a large gingerbread man, both adorned with Santa hats.

“Off to the side, I have my little collection of four little moose that are dressed in puffer coats and smiling. One looks like Santa Claus,” Robin Swann remarked.

The centerpiece of the Swanns’ display, however, is their Nativity scene.

“There’s Mary, Joseph and baby Jesus, and above them we have a bright white star,” said Swann, who belongs to St. Michael Parish in Newark. “I insisted that we have solid ones, not these blow-up ones that could deflate.”

The Swanns always love to decorate for Christmas, but this year they put a little extra effort into making their display perfect because they were participating in St. Michael Parish’s second-annual Outdoor Christmas Decoration Contest. The Newark parish began the contest last year in an effort to provide parishioners with engaging yet safe activities, according to Chris Taylor, a member of St. Michael’s pastoral council.

“COVID has put such a damper on every aspect of our daily lives, but this was an outdoor thing. People were decorating their homes anyway, and it was just a small group of judges driving around and checking them out,” Taylor explained.

“We were trying to generate some parish community spirit and get people involved,” she added. “Our church is not immune to the declining numbers in attendance at Mass and numbers of parishioners in general. We thought this would be something to get the parishioners involved and excited about something within our church.”

Last year, nine families participated in the contest, and awards were given to the families with the best religious-themed display, the most whimsical display and the most original display. Katie Childs, whose family’s display won an award last year, said she enjoyed participating in the contest. Her husband makes Christmas decorations out of wood and metal, sometimes by repurposing old metal roofing, so their display incorporated sleds, trees and a Nativity scene, said Childs, St. Michael’s parish secretary.

Taylor, who was on the panel of judges for last year’s contest, said the judges did not have a hard time choosing this year’s winning display. That honor went to the Swanns, as they were the only entrants in this year’s contest. Taylor said she believes several factors likely contributed to the lack of participation in the competition this year. St. Michael Church has been closed for several months while renovations were underway, so parishioners have been attending Mass at nearby St. Michael Church in Lyons — which is part of St. Joseph the Worker Parish — and may not have been aware of the competition, she said. The Newark church was expected to reopen just in time for Christmas, she said.

Some of the events and activities that had been cancelled last year due to the pandemic have resumed this year, and a relative lack of snow this season may have made people to lose track of time and miss the deadline to enter the contest, she added.

Although she is disappointed by the low number of entrants, Taylor said she hopes the parish will decide to offer the contest again next year. Swann said she was glad to have participated in the contest, and grateful for the opportunity to let her faith shine — literally.

“I just think it’s nice everyone can see you’re not ashamed of being Catholic, especially in this world, where everything is (often) ‘happy holidays’ instead of ‘Merry Christmas,’” Swann said.