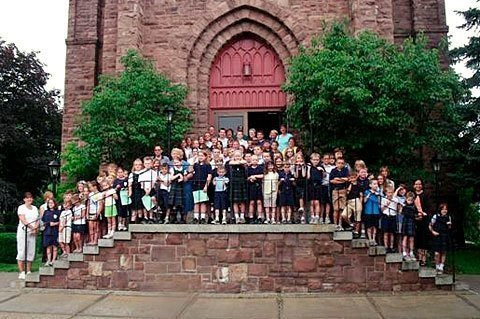 This photo of St. Michael School's student body (minus the eighth-graders) was taken after the end-of-the-year Mass June 22 at St. Michael Church in Newark.

St. Michael School opened in Newark 57 years ago, and as time went on the school became more than a parish school. It eventually became a regional school of sorts, because it was the only Catholic school left in Wayne County. Last year it drew students from towns and villages scattered across Wayne and Ontario counties, including Clyde, Savannah, Lyons, Clifton Springs, Phelps, Palmyra, Macedon and Sodus.

"There were 10 parishes we had kids coming from," noted Suzanne Tulloch, public-relations and development coordinator for the school and parent of two St. Michael students.

In spite of that, however, parents say the school community has always been close-knit.

"We liked the smaller size of the classes and knowing almost every single family," said Michelle Malach, mother of three St. Michael students. "For many years the students, parents and teachers of St. Michael School have felt like an extension of our family."

That’s why many parents felt like they were losing a family member when they learned May 26 that the school would close its doors for good at the end of the 2010-11 school year due to a substantial budget deficit and low enrollment numbers. Many parents still are scrambling to enroll their children in other schools for the next year, said Principal Pauline DeCann. Several parents have registered their children at St. Francis-St. Stephen School in Geneva, and others have looked into St. Mary School in Canandaigua and St. Rita School in Webster, she said.

"People are still kind of trying to decide what they want to do," DeCann said.

Malach has enrolled her three children, who will be in the first, second and fourth grades, at East Palmyra Christian School, and Tulloch’s daughter will be in the fourth grade at St. Francis-St. Stephen School next year. Tulloch’s son, Ian, was a member of St. Michael’s last 8th-grade class, which graduated June 22, and he likely will attend DeSales High School in Geneva in the fall.

It will be tough to leave the St. Michael School family because the school was more than just a school, Tulloch said.

"Unless you have had the experience of a school family it is a very difficult thing to explain. Our school family enveloped everyone involved in the school. Families helped each other and knew each other," she said.

"You know everyone by name," added Tom Bremer, a St. Michael School alumnus who coached CYO basketball teams at the school for many years.

Bremer and his wife sent their three sons to the school in part because Bremer had such a good experience there when he was a child.

"I can look now at my class photo and name every kid there, even though there were over 50 of them. Friends for life were made there," he said, noting that he enjoyed playing CYO basketball during his years as a St. Michael student.

The basketball league instilled the values of hard work and sportsmanship in Bremer, and he said he was honored to be able to instill those values in his players and help them understand what it truly meant to be a student athlete. While watching one his players at a game last year, Bremer knew his lessons had sunk in.

"One of our players stole the ball and was heading in for an easy lay-up, when instead he worked the play purposely to pass the ball to another player so (that player) could score his first basket of the year," Bremer said.

Bremer’s family also appreciated St. Michael’s devoted teachers and their focus on Christian values and academics, which prepared his son to take college courses as a high-school junior next year, he added.

"The school has a history of academic excellence," noted Bob Hutteman, father of three St. Michael students. A 1979 graduate of Holy Trinity School in Webster, Hutteman wanted to provide a similar experience for his children, so he and his wife, Michele, chose St. Michael.

"The school has helped my children academically and has established a strong base of character, responsibility and obligation that will help them be leaders in their communities. The St. Michael experience is something that will last a lifetime," Hutteman said.

The school had top-notch academics, dedicated teachers and staff, and a great school family, yet it was even more than the sum of those parts, Tulloch and Bremer agreed.

"When you walked in the front door you could just sense it was more than just a school," Bremer said. "Special is just the word that comes to mind when I think of the school."