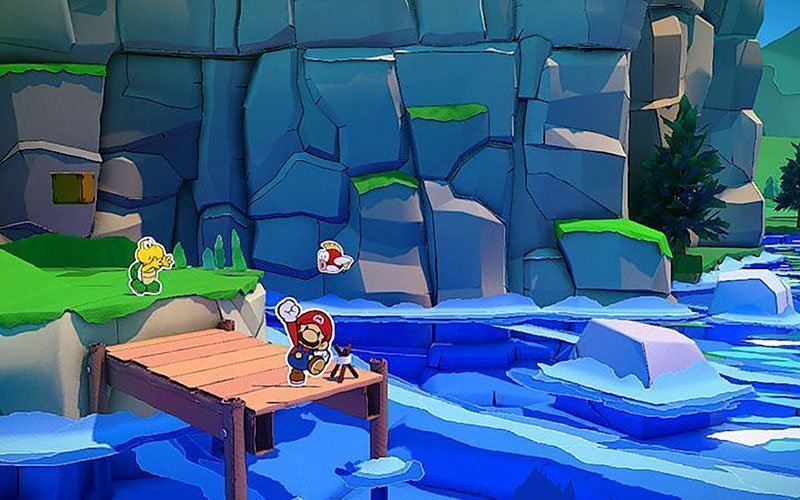 This is a scene from the video game "Paper Mario: The Origami King." (CNS photo by Nintendo)

NEW YORK (CNS) — Like its predecessors in the popular Nintendo franchise, “Paper Mario: The Origami King” is a fun and wholesome game that can be enjoyed by the entire family. It’s the sixth release in the “Paper Mario” series, which dates back to 2000 and the Nintendo 64 console.

The red-capped plumber comes to the rescue of the Mushroom Kingdom after King Olly covers Princess Peach’s castle in paper streamers, imprisoning everyone inside and transforming them into origami. Each streamer leads Mario to a member of the Legion of Stationary, allies of King Olly who guard the decorated castle.

As he follows the ribbons, Mario battles against King Olly’s minions who want to bring him into the fold. These enemies are fought back with hammers and, occasionally, Mario’s boots. But the combative violence is mild.

Along his journey, Mario discovers Olivia, Olly’s sister who was punished for trying to stop her brother from taking over the Mushroom realm. Olivia joins Mario on his rescue mission, hoping to save her sibling at the same time. Her characterization is fresh and endearing, especially with her heartfelt hopes to redeem Olly.

When there are enemy encounters, Mario is transported into an arena. Opponents are then lined up in rows or columns before players select the best item to defeat them in as few moves as possible. This combat system eventually feels repetitive as it pulls the gamer out of the story.

As with other titles in the series, hidden secrets abound. Anything from a tree to a door could be hiding a paper character — ready to pop-out with a self-aware joke — or concealing an entrance to a secret room. The dialogue throughout the game is clever and well-written, adding to the pleasant experience.

There is quite a bit of reading since dialogue is entirely text-based. So younger gamers may need some assistance in that area. Overall, this is a beautifully rendered, concern-free game that’s worth the time and effort.

Tags: Game Reviews
Copyright © 2023 Catholic News Service, Inc. All rights reserved. Linking is encouraged, but republishing or redistributing, including by framing or similar means, without the publisher's prior written permission is prohibited.