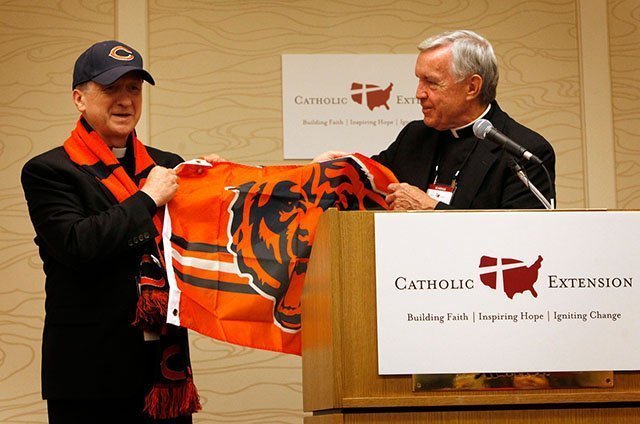 Archbishop Blase J. Cupich, appointed Sept. 20 to head the Chicago Archdiocese, receives Chicago Bears gear from Father Jack Wall, president of Catholic Extension, during a Sept. 22 news conference in the Chicago suburb of Lincolnshire. The former bishop of Spokane, Wash., recently named to succeed Chicago Cardinal Francis E. George, has served on Extension's board of governors since 2009 and chairs its Mission Committee.

WASHINGTON (CNS) — Most people’s everyday tasks — grocery shopping, cooking dinner, keeping up with family — are part of what Chicago’s newly named archbishop looks to in seeking balance between his official roles and being a pastor.

In an Oct. 6 interview with Catholic News Service, Archbishop Blase J. Cupich said those are the kinds of things he does to try to stay in touch with what really matters in the lives of the people he shepherds as their bishop.

Archbishop Cupich, currently the bishop of Spokane, Washington, will be installed as archbishop of Chicago Nov. 18, succeeding the retiring Cardinal Francis E. George.

Coming from a family of nine children, the archbishop said he has many married siblings, 17 nieces and nephews, and an equal number of great-nieces and great-nephews. "We talk," he said. "I know their lives and I know their stresses. I also stay close to a lot of families that I have known in the 40 years I have been a priest."

Staying close includes doing his own grocery shopping for the occasions when he skips his usual meals with the seminarians whose residence he shares and makes dinner for friends.

Simply keeping track of the prices of milk and bread helps him have a sense of the needs of other people, Archbishop Cupich said. "I think it’s a good thing for me because I see the struggles people have in putting food on the table."

Archbishop Cupich said it has been encouraging and empowering to hear Pope Francis talk about doing just such simple things to be better at understanding the needs of the people of God.

The framework Pope Francis laid out at the beginning of the extraordinary Synod of Bishops on the family is a model for how the business of the church should be conducted, he said.

"The Holy Father is very clear about listening to all voices," said Archbishop Cupich. "He specifically noted that it doesn’t matter what station you have in the life of the church, what position you hold, but that it’s important for all voices to be heard, to speak frankly and with charity."

Talking about how he has kept balance in his own life as bishop first of Rapid City, South Dakota, (1988-2010) and now in Spokane, Archbishop Cupich cited the pope’s homily at a vigil Mass and in opening remarks at the synod.

It doesn’t hurt when the pope himself advocates the way you’ve been doing ministry, he admitted. "It allows you to be more confident in that approach and also to drill down deeper into how important it is."

Archbishop Cupich said he expects it will be harder to manage that in his new post in the enormous Archdiocese of Chicago.

In moving into a bigger job, there’s always a risk, he said, "of being so apart from the lived experience of people that you lose something. I saw that when I moved from being a pastor to a bishop. You have to try to be creative. You have to look for opportunities to minimize that risk."

"I have to remind myself it’s not my church. I don’t have to prove myself. It’s Christ’s church, Archbishop Cupich said. "I have to be attentive to what Christ wants. That will come in the voices of the people. It will come in my own prayer experience. It will come in reflecting on what has already proven to bear good fruit."

Archbishop Cupich noted that since his appointment to Chicago was announced Sept. 20, he has frequently been asked where he falls on a spectrum with the late Cardinal Joseph Bernardin on one end and Cardinal George on the other.

Then there’s a corollary question about whether Pope Francis was sending a particular message in naming him to the Archdiocese of Chicago.

"My reply to that is that I think he sent a pastor. That’s how I look upon myself. I think that’s what my role is."

His role as pastor doesn’t fit with the "so-called culture wars" over various issues either, he said. "That’s a term we as pastors don’t want to be associated with. I don’t think we should be associated with any kind of war. War divides, destroys. It has winners and losers. The main role of pastors is to keep people together."

He again cited Pope Francis, who said at the synod’s opening session that he sees his role as guaranteeing the unity of the church. "He knows there are going to be different voices. People are going to disagree with each other, sometimes heatedly. But he feels that his role as the chief shepherd, as the successor of Peter, is to promote unity among ourselves, not in spite of the diversity, but because of it.

"In many ways a diocesan bishop has that responsibility as well: to make sure that we walk together, to accompany each other," he said. "I want to make sure that whatever we do as a church redounds to the benefit of society. Society is very fragmented today. It’s very polarized. If we can offer a vision to the greater society of how a community can work together in spite of the differences that are there, to learn something from each other, then not only will we do something for the church, but we will do something for society."