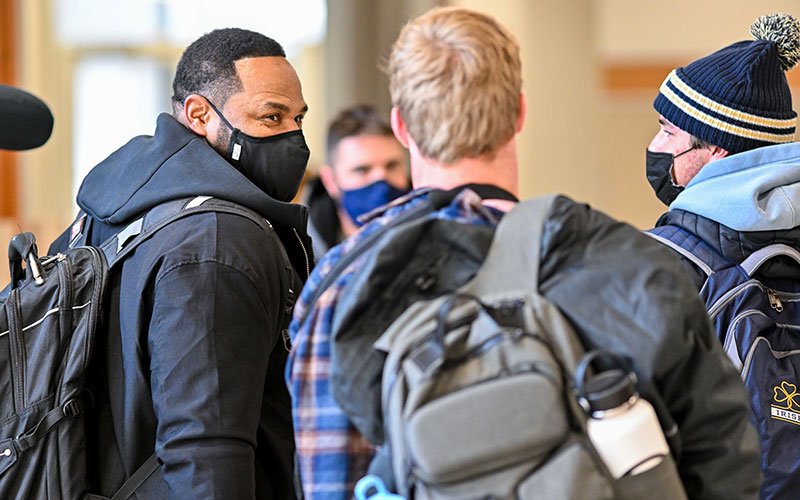 Jerome Bettis, an NFL Hall of Famer who played college football at the University of Notre Dame in Indiana, walks to an undergraduate class at the university's Mendoza College of Business Jan. 26, 2022. Before he was drafted to play in the NFL, he played three years at Notre Dame in the early 1990s and he recently returned to finish his undergraduate degree. (CNS photo by Matt Cashore, courtesy University of Notre Dame)

NOTRE DAME, Ind. (CNS) — Jerome Bettis, in his football days, got the nickname “The Bus” because he was carrying would-be tacklers along with him during his punishing runs from scrimmage.

Today, what Bettis is carrying is a full load of classes at the University of Notre Dame, as he strives to finish what he started in his college days more than 30 years ago — a bachelor’s degree in business.

Bettis, now 49, is on track to graduate this spring and get that coveted Notre Dame diploma. If he does, the Pro Football Hall of Famer will have made good on a promise to his mother, Gladys — you may remember their Campbell’s Chunky Soup commercial from 20 years ago — that he would get his sheepskin.

“I promised my mother that I would get my degree,” he said. “In my immediate family, I’ll be the first person to graduate from college,” Bettis told NBC’s “Today” show Jan. 28. “But most importantly, I have two children. For them to see Dad finish a commitment that he set out some 27 years ago, for me to complete that, I think it says a lot to them.”

And at commencement exercises in May, Bettis getting a diploma means that all 21 Notre Dame football recruits from 1990 will have graduated.

Bettis has lived much of his life in public eye as a throwback of sorts. In an era of pro football where running backs dipped, dived and swerved to avoid tacklers, Bettis was the hard-charging fullback who plunged into the line, dragging defenders with him as he motored for that extra yard.

It served him well: Bettis is eighth all-time in NFL rushing yardage at 13,662 yards, not to mention eight 1,000-yard seasons, 91 touchdowns, six Pro Bowl selections and a Super Bowl championship after the 2005 season, his final season before retiring as a player.

On campus, Bettis is another throwback. Most of the students at Notre Dame aren’t even half his age; Bettis turns 50 Feb. 16. They take their class notes on tablets or laptops; Bettis takes his notes with pen and paper.

Don’t think of Bettis as an academic laggard. He left Notre Dame after his junior year, in which he rushed for 10 touchdowns and caught six touchdown passes, and entered the NFL draft, being selected in the first round by the Los Angeles Rams. He spent three seasons with the team before being traded to Pittsburgh, where he became a much-loved sports hero.

While he was in a dispute with the Rams in 1996 and threatened to retire, he went back to Notre Dame to take classes, which left him just one semester shy of graduating.

Still, he told NBC’s Anne Thompson — herself a Notre Dame graduate: “I am a much better student at 49 because I want to learn, I want to know all of this information.”

The degree will come in handy in his post-football career, which has involved trucking, staffing, development and marketing companies as well as his career as a television personality, where Bettis is on camera for the NFL Network.

“I say to all our coaches that there are three things we should be concerned about versus integrity: Do things the right way, second is help these kids get a degree and do well in their lives, and the third is winning on the field,” said Holy Cross Father John Jenkins, Notre Dame’s president, on “Today.” “And Jerome getting a degree after all his success just underscores how important that is.”