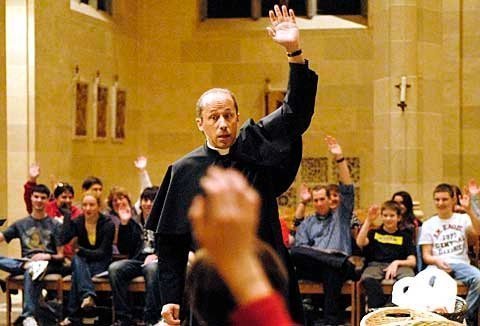 Father Tony Ricard speaks on the topic "We Are a People of Joy" at Sacred Heart Cathedral Nov. 16 as part of a three-day Black Catholic Revival.

ROCHESTER — More than 300 people recently traveled to Sacred Heart Cathedral to learn about hope, joy and gratitude from the Holy Who Dat.

If you’re asking yourself, "The holy who now?" you can stop scratching your head. The Holy Who Dat is a nickname for none other than Father Tony Ricard, pastor of Our Lady Star of the Sea Parish in New Orleans and Catholic chaplain to the reigning champions of the NFL, the New Orleans Saints. He also is an instructor of church doctrine at Xavier University’s Institute for Black Catholic Studies in New Orleans and a sought-after youth speaker, who to date has preached in at least 18 countries.

Father Ricard was the featured speaker during a three-day Black Catholic Revival at Sacred Heart Cathedral. The revival, which was held Nov. 15-17, was open to the public and was sponsored by Nazareth College’s Office of Multicultural Affairs and Catholic campus ministry in conjunction with the Diocese of Rochester’s Office of Black Ministry and Society for the Propagation of the Faith.

The idea for the revival was born two years ago, after diocesan officials conducted several listening sessions and began looking for a way to showcase African-American Catholic culture and spirituality, said Bernard Grizard, director of the diocesan Office of Parish Support Ministries, which includes the Office of Black Ministry.

Hope and joy were the themes of the revival’s first two nights, respectively, and gratitude was the theme of the third night. That third evening’s reading from the Gospel of Luke told the story of Jesus healing 10 lepers. Only one of those lepers, a Samaritan, came back to thank Jesus.

"I’ve often thought about what happened to those other nine," Father Ricard remarked.

Some of the former lepers probably went home to show their families they were healed, while others probably went to display their healed skin before those who had ostracized them. They probably all meant to go back and thank Jesus, he mused.

"I would assume some of them, by the time they got back Jesus had left the area. He was just passing through. Although they would have loved to have the opportunity, they missed it because they allowed something good or something bad to distract them from what they should have done," Father Ricard said.

Most of us are more like those nine healed lepers than we realize, he added. We’re full of good intentions, but we don’t always follow them through.

"I believe that many folks are going to find themselves standing before God on the last day, and they’re gonna say, ‘Lord, we meant to say thank you, we meant to visit the sick, we meant to go to church. We just got sidetracked, but it’s not that we didn’t want to," Father Ricard said.

Before we know it, our lives on earth will be over and we’ll all have to stand before God and account for what we’ve done with the gifts we received, he added.

"Did we say thank you?" he asked rhetorically.

This story from the Gospel of Luke reminded Father Ricard of a Christmas gift he received from his Aunt Susie when he was 10 years old, he said. Every family has one person that can always be counted on to find the perfect gift, and Aunt Susie was that person in Father Ricard’s family. When she came to his parents’ house loaded down with boxes that Christmas, "I had no visions of sugarplums dancing up in my head," he recalled.

Instead, he was dreaming of footballs, G.I. Joe action figures and Rock ‘Em Sock ‘Em Robots. When he tore open the box, however, he found, wrapped in shiny plastic, a six-pack of tube socks with broad blue stripes at the tops.

"I don’t know if you all can understand the disappointment in a 10-year-old’s heart when he’s got G.I. Joe in his heart," Father Ricard said. "You just don’t give no kid tube socks for Christmas."

Nonetheless, he swallowed his disappointment and said, "Thank you, Aunt Susie," before adding, "It’s just what I always wanted," for good measure.

Several weeks later, however, he took the unopened package of socks out of his drawer and pulled on three pairs before going out to play football with his friends. It was a bitter cold day, and while all of his friends complained about their frozen feet, the young Father Ricard’s feet were toasty warm.

"All I kept thinking was, ‘Thank you, Aunt Susie. Just what I always wanted,’" he said. "Sometimes we get gifts and we don’t even realize what we’ve got."

"No matter how hectic your day was or how many crazy people you had to deal with … you’ve always got so much to thank God for," Father Ricard said. "The fact that you woke up, you’ve got something to be thankful for, because some people didn’t wake up today."

The priest’s message resonated with the revival’s participants, many of who surrounded him after his presentation and asked him to sign autographs and pose for pictures with them.

"His message was simplistic and understandable to me," said Mary Wingo, a member of Rochester’s Immaculate Conception Church. "The way he tells the story makes you really think about the things you should be grateful for."