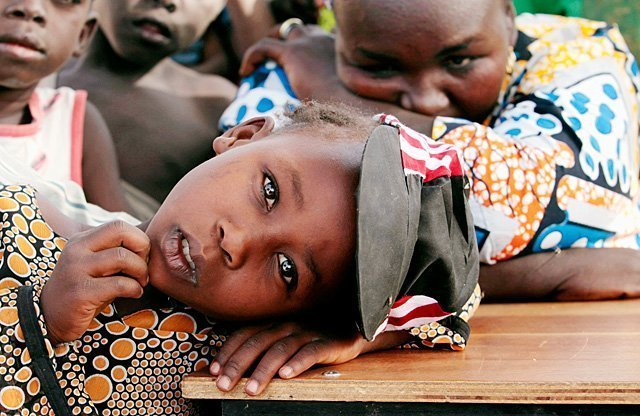 A girl displaced as a result of Boko Haram attack in the northeast region of Nigeria rests her head on a desk at a camp for internally displaced people in Yola Jan. 13.

ROME (CNS) — Underlining the failure of the Nigerian government to stop the violent rampage of Boko Haram, a Catholic bishop has called for Western military intervention.

"The West should bring in security — land forces — to contain and beat back Boko Haram," he said in an interview Jan. 19 with the international Catholic charity Aid to the Church in Need.

Boko Haram, which the U.S. has labeled a terrorist organization, claims it seeks to overthrow the Nigerian government and create an Islamic state.

More than 11,000 people have died since Boko Haram launched an insurgency in 2009, engaging in a campaign of terror, mass killings and abductions, carrying out suicide bombings, burning villages and forcing hundreds of thousands of people to flee. Some reports from human rights groups say as many as 2,000 people may have been killed when militants captured Baga in early January, razing thousands of homes in their path.

Bishop Doeme said that of the 125,000 Catholics in his diocese, almost 70,000 have fled their homes and about 1,000 have been killed. In his diocese, he said, Boko Haram militants have destroyed more than 50 churches and chapels, and more than 200 churches have had to be abandoned in the past five years.

Doctors Without Borders, which has a permanent base in Maiduguri, estimates between 800,000 and 1.5 million people are displaced, mostly in northeastern Nigeria.

However, even more serious is the fact that Nigerian government leaders "continue to do nothing and live as if nothing has happened. It’s not that there lack the means: the money is there and lots of it. What is missing is the sense of responsibility on the part of those who govern," he told Vatican Radio Jan. 19.

"Among the soldiers, there were sympathizers with Boko Haram, some of them were even Boko Haram members, and many of them just ran away" during the militants attack on Baga, he said.

The bishop said the government also knows who is financially supporting the group from abroad.

Boko Haram militants have spilled over into neighboring Cameroon and are recruiting people in neighboring countries "enticing them with money, they pay in dollars. And the people, who are without work, follow them," Cardinal Onaiyekan said.

African nations need to cooperate, he said, and prayers are urgently needed "so that our government is able to recognize the seriousness of the situation, so that we can launch not just a military (response) but also a path of political dialogue."

"That way we can slowly begin to change the mentality of these people who commit these atrocities not just against our country but against human life," the cardinal said.