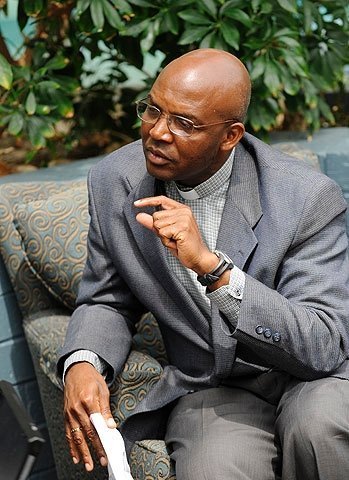 Father Malachy “Eloo” Nwosu, who serves as pastor of three northern Tompkins County churches, was recently incardinated as a priest of the Rochester Diocese.

Father Malachy "Eloo" Nwosu faced plenty of adjustments his first year in the Diocese of Rochester. Upon arriving in this new land, he logged three parish assignments in quick succession — one in the Finger Lakes, one in the Southern Tier and one in Monroe County — after never having been a parish priest in his native Nigeria.

Then there was the matter of that white fluffy stuff, which is nonexistent back home.

"When I saw the flurries, I would run into the house and I refused to come out," he recalled with a smile.

Yet Father Nwosu has obviously adapted quite nicely, as he’s served continuously in this diocese since coming here in 2001. In fact, his commitment recently became permanent as he was incardinated as a priest of the Rochester Diocese. Father Nwosu’s incardination — which involved an agreement between his bishop in Nigeria and Rochester Bishop Matthew H. Clark — was made official in early May.

"I think this (diocese) is where I want to be. I’m very comfortable doing the ministry here; I feel a sense of realization that this is what I want to do," said Father Nwosu, 51, who has served for nearly two years as pastor of the northern Tompkins County cluster of All Saints Parish, Lansing; Holy Cross, Dryden; and St. Anthony, Groton. A celebration of his incardination was held May 30 at Holy Cross.

Father Nwosu was born in Ichida, a town in southern Nigeria. He credited his growth in the Catholic faith to his devout mother; close proximity to his church where he was an altar server; and steady attendance beginning in childhood at "block rosaries" — large gatherings of neighborhood residents for prayer. "Every kid was involved," he said.

In addition, he received positive exposure to religious vocations by getting to know seminarians who often stayed with host families in his neighborhood. Father Nwosu eventually progressed through seminaries himself, and he was ordained a priest for his home Diocese of Awka on Aug. 21, 1993.

For the next eight years, Father Nwosu taught full time at St. John Bosco Minor Seminary in Awka, the capital city of Anambra State. He also taught part time for three of those years at Pope John Paul II Major Seminary in Awka. As time went on he sought to study in Europe, but was unable to secure a scholarship. However, a different opportunity to travel emerged in 2000 — in the form of an invitation from Bishop Clark to become an extern priest in the Rochester Diocese.

Father Nwosu recalls the exact date and time he alit in the United States — May 15, 2001, at 5 p.m. at John F. Kennedy International Airport in New York City. He arrived in Rochester at 11:25 that night before beginning his first assignment in the Roman Catholic Community of Geneva. Father Nwosu served there for a few months and then did likewise at Blessed Trinity/St. Patrick parishes in Tioga County before spending nearly a year at St. Rita Parish in Webster.

In August 2002 Father Nwosu became pastor of the Northern Cayuga Cluster, where he would remain for the next six years. In an ironic twist — considering his initial aversion to winter weather — the cluster was renamed Our Lady of the Snow when it became a single parish in 2005. From there, Father Nwosu served from 2008-10 as parochial administrator at St. Helen Parish in Gates. He then moved into his current pastorate in northern Tompkins County in 2010.

During his time at Our Lady of the Snow, Father Nwosu began actively considering attaching an air of permanence to what had begun as a temporary assignment in this diocese. He explained that the thought process toward incardination was fueled by the death of his mother in 2007, making him feel less strongly about returning to Nigeria, as well as the fact he had grown fond of ministering here. Father Nwosu expressed high admiration for Bishop Clark, as well as several diocesan and parish officials, who have lent him guidance and encouragement over the past 11 years.

He is one of four priests to recently be incardinated in the Rochester Diocese; the others are Father Paul Gitau, pastor of St. Paul Parish in Webster; Father Jesus Flores, diocesan coordinator of migrant ministry; and Father Augustine Chumo, pastor of St. Joseph the Worker Parish in Clyde, Savannah and Lyons.

Though now a Rochester diocesan priest, Father Nwosu said nothing much has changed regarding his daily duties and ministry. He enjoys his current parish assignment, saying his three northern Tompkins churches are "wonderful, wonderful" parishes with each possessing a distinct personality.

Not only does Father Nwosu now feel very much at home in these parts, he’s even able to brave the winters now.

"I’m not afraid of snow," he quipped.