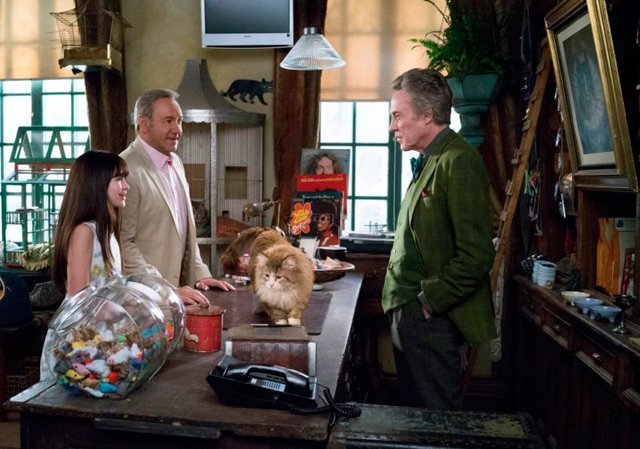 Melina Weissman, Kevin Spacey and Christopher Walken star in a scene from the movie "Nine Lives." The Catholic News Service classification is A-II -- adults and adolescents. The Motion Picture Association of America rating is PG -- parental guidance suggested. Some material may not be suitable for children.
By John Mulderig
Catholic News Service
NEW YORK (CNS) — It must have been a slow day in Hollywood when the proposal for the vapid comedy "Nine Lives" (EuropaCorp) got the green light.
Or perhaps someone behind the scenes saw some potential in the project that failed to make it to the screen.
Either way, the dead-on-arrival result, in which Kevin Spacey gets turned into a cat named Mr. Fuzzypants, is calculated to please very few adults. As for those youngsters who might be most inclined to settle for the entertainment value of slapstick animal antics, the script ill-advisedly includes elements, including a story line touching on suicide, that prevent endorsement for them.
Watching the formidable Spacey wander through the wreckage here is like seeing Vladimir Horowitz seated at Schroeder’s piano — or hearing Louis Armstrong puff away on a kazoo.
Spacey plays Tom Brand, a callous tycoon too work-obsessed to focus on his marriage to second wife Lara (Jennifer Garner) or to devote much attention to parenting their 11-year-old daughter Rebecca (Malina Weissman). His grown son David (Robbie Amell), who works for Dad and craves his approval, gets equally short shrift.
Tom is clearly in need of some life lessons, and what better way to teach them than to consign his soul, temporarily, to the body of a household pet? So the reasoning seems to go.
Cue Christopher Walken in the role of Felix Perkins, the vaguely mysterious shop owner from whom Tom purchases a kitty as a birthday gift for Rebecca. Felix’s dark hints about an impending crisis for Tom are soon vindicated as an accident leaves the wheeler-dealer’s body in a coma and lands his psyche inside Mr. Fuzzypants.
Since Tom, unsurprisingly, objects to this arrangement, far too many of the ensuing scenes are dominated by his caterwauling meows of protest.
When not grating on the audience’s ears, Tom/Mr. Fuzzypants attempts to tickle their funny bones by, among other things, scrambling into a kitchen cabinet and getting his head stuck in a box of breakfast cereal. And when David’s mom, Madison (Cheryl Hines), appears on the scene, Tom demonstrates his feelings toward his ex by climbing into her designer handbag and relieving himself.
In between such adventures, Tom gets to hear what the family really thinks of his neglectful ways and starts to repent. Thus, amid the otherwise flavorless proceedings, we’re force-fed the unarguable moral that that familial bonds should take priority over the pursuit of wealth.
Retrieving that nugget of obvious wisdom from the fur ball of boredom that surrounds, however, it is hardly worth the effort.
The film contains a suicide theme, some adult wordplay, at least one use each of profanity and crass language, a mild oath and nonhuman scatological humor. The Catholic News Service classification is A-II — adults and adolescents. The Motion Picture Association of America rating is PG — parental guidance suggested. Some material may not be suitable for children.
– – –
Mulderig is on the staff of Catholic News Service.
Copyright © 2022 Catholic News Service, Inc. All rights reserved. Linking is encouraged, but republishing or redistributing, including by framing or similar means, without the publisher's prior written permission is prohibited.