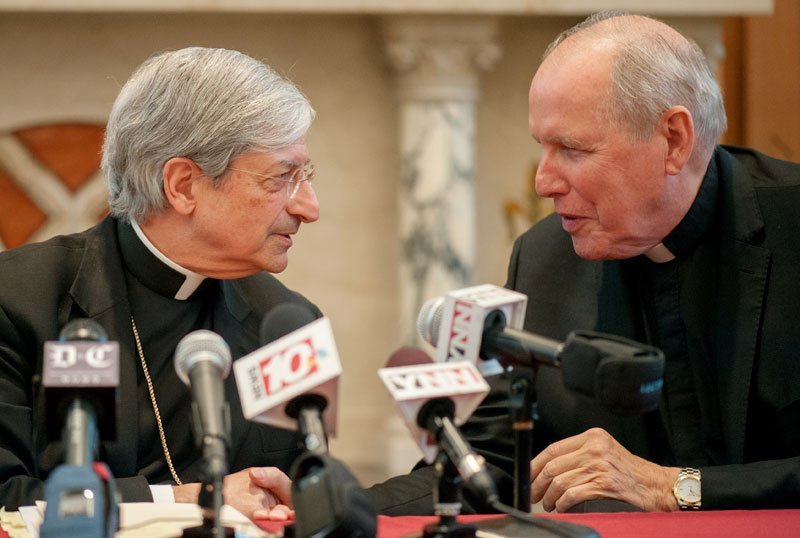 A native of New York City, Bishop McQuaid was previously vicar general of the Diocese of Newark, N.J. He was consecrated a bishop on July 12, 1868, and installed in Rochester on July 16 of that year.

One of his first acts as bishop was working to establish a system of tuition-free parochial elementary schools. He also established St. Andrew’s Preparatory Seminary for aspiring priests in 1870, and in 1893 founded St. Bernard’s Seminary to train local clergy.

According to The Diocese of Rochester in America, 1868-1993 by Father Robert F. McNamara, one of the most notable efforts in the latter part of Bishop McQuaid’s tenure was founding St. Ann’s Home for the Aged in Rochester. It was operated by the Sisters of St. Joseph and dedicated in 1906. Now known as St. Ann’s Community, it offers a range of senior services, from skilled nursing to independent living, at retirement communities in Rochester and Webster.

Bishop Hickey opened 10 parochial schools in the first 10 years of his bishopric, inaugurating the construction of Aquinas Institute and Nazareth Academy, and asking the Sisters of St. Joseph to establish Nazareth College. He also pioneered a program that enabled public-school children to be released for one period a week for religious-education classes.

He was instrumental in assisting New York’s bishops in creating the State Council of Catholic Charities in 1916 and securing the 1917 passage of state legislation establishing Catholic Charities Aid Associations in each New York diocese.

Due to ill health, he resigned in 1928. He was promoted to the titular see of Viminacium (an ancient diocese in modern Serbia) and given the honorary title of archbishop.

Vicar General Msgr. O’Hern, a native of Olean, was named apostolic administrator. On Jan. 4, 1929, he was appointed Rochester’s third bishop and was consecrated March 19, 1929.

In 1931, he urged his pastors to establish parish aid societies to help those struggling during the Great Depression and created work opportunities by sponsoring building campaigns at diocesan institutions.

He also forged interfaith and ecumenical relationships, and appointed priest-chaplains at non-Catholic colleges, encouraging the Newman Movement on secular campuses.

Bishop O’Hern attended the last ceremony of his life on May 7, 1933, when he dedicated All Saints Church in Cayuga County. He died of a heart attack at his residence on May 22, 1933.

Archbishop Mooney was serving as apostolic delegate to Japan when he was named fourth bishop of Rochester on Aug. 28, 1933.

A Maryland native raised in Ohio, he was tasked with shepherding the diocese through the end of the Great Depression. He began several charitable societies, and in1935 he approved the formation of the Peter Claver Society to work in the African-American community.

Pope Pius XI appointed him archbishop of Detroit on May 25, 1937. Before departing for Detroit that summer, Archbishop Mooney approved the sale to Eastman Kodak Co. of St. Patrick’s Cathedral and rectory, the first diocesan chancery and St. Andrew’s Seminary. He also named Sacred Heart Church as the diocesan pro-cathedral (temporary cathedral).

The Iowa native advocated for the City of Rochester to create a plan to fight the economic problems brought about by the Great Depression. Several fundraising campaigns during his tenure helped build Catholic high schools around the diocese, while others benefited Catholic higher education.

After Vatican II concluded in 1965, he worked to implement the council’s changes. One of those changes came about on Aug. 8, 1966, when Pope Paul VI issued a decree implementing the council’s requirement that bishops who headed dioceses should voluntarily offer their resignations to the pope upon their 75th birthdays. Bishop Kearney was 81, so he sent his resignation letter to the pope, who accepted it. He ceased to be Rochester’s bishop when Bishop Sheen was named his successor on Oct. 26, 1966.
Bishop Kearney was appointed titular bishop of Tabaicara (an ancient see in modern Algeria) in 1966 and died in Rochester on Jan. 12, 1977.

Bishop Sheen was an auxiliary bishop of New York when he was named sixth bishop of Rochester. The Illinois native was installed on Dec. 15, 1966.

Prior to becoming an auxiliary bishop of New York, he had taught for more than 20 years at The Catholic University of America in Washington, D.C.; served for 16 years as national director of the Society for the Propagation of the Faith; and pioneered Catholic media evangelism — first on the radio for 22 years with “The Catholic Hour,” and later on television with the highly rated “Life is Worth Living.”

In Rochester, he established the first diocesan priests’ council and also paved the way for the diocese to introduce the permanent diaconate in the 1980s by ordaining his first permanent deacon in 1969.

He also was committed to helping the poor. His Office of Urban Ministry coordinated efforts with the local African-American community. He created a Spanish Apostolate to assist the Latino community and founded an organization that became the affordable-housing developer Bishop Sheen Ecumenical Housing Foundation.

In a further effort to help Rochester’s poor, he decided in January 1968 to sell St. Bridget’s Church to the federal government as a site for low-income housing. As he had not previously consulted the parish’s pastor or parishioners about the plan, he rescinded it in March 1968.

In the summer of 1969, Bishop Sheen announced that Pope Paul VI had approved his resignation a year before he was required to give it. He returned to New York City on Oct. 15, 1969, and was appointed titular archbishop of Newport, Wales, in 1969. He died in New York City on Dec. 9, 1979. His sainthood cause, sponsored by his home diocese of Peoria, Ill., is currently pending.

Msgr. Hogan, a native of Lima, Livingston County, was consecrated bishop and installed on Nov. 28, 1969. Prior to becoming Rochester’s seventh bishop, he had been a professor of fundamental theology and later dean at St. Bernard’s Seminary.

Bishop Hogan continued implementation of the decrees of Vatican II. Since Vatican II had encouraged ecumenism and interfaith collaboration, he had the diocese join Genesee Ecumenical Ministries (later renamed the Greater Rochester Community of Churches), and he worked with the local Jewish community on social issues of mutual concern.

When the new Vatican II English missal became available in 1974, he approved such changes as Saturday-evening Masses, Communion in the hand, and laymen and laywomen serving as lectors and extraordinary ministers of holy Communion.

Vatican II also called for dioceses to create pastoral councils representing priests, women and men religious, and laypeople. Bishop Hogan began working on plans for such a consultative body in 1970, and the Diocesan Pastoral Council was formally established in 1975.

Also in 1975, he issued the pastoral letter “You Are Living Stones,” which emphasized lay training and leadership; listed desired qualities in pastoral ministers; and outlined such initiatives as a diocesan program for the permanent diaconate, ongoing adult education, a sabbatical program for priests, and working closely with renewal groups. That same year he became one of 24 bishops to sign the Appalachian pastoral letter “This Land Is Home to Me.”

Bishop Clark, a native of Waterford in the Albany Diocese, was consecrated a bishop on May 27, 1979, in Rome and installed as Rochester’s eighth bishop on June 26 of that year. Prior to that he had served as spiritual director at the North American College in Rome.

Like his predecessors, Bishop Clark continued to implement the changes of Vatican II. In 1982 he ordained Rochester’s first class of permanent deacons. A 2003-05 renovation he oversaw at Sacred Heart Cathedral brought the building more in line with the council’s liturgical guidelines.

He also promoted the council’s focus on involving the laity in church life. In 1994 Bishop Clark appointed the diocese’s first lay pastoral administrator, opening opportunities for laypeople to become parish leaders. Additionally, he called a diocesan synod in the early 1990s that sought input from diocesan Catholics, and initiated a pastoral-planning process in 1997 that gave parishioners substantial say in how their parishes would be reconfigured. And his 2009 book Forward in Hope: Saying Amen to Lay Ecclesial Ministry detailed how increasing ministerial opportunities for laypeople had changed the face of the church.

On April 9, 1982, Bishop Clark released his first pastoral letter, “The Fire in the Thornbush: A Pastoral Letter on Women in the Church.” He asked the faithful to reflect on such actions as respecting women and the gifts they bring to the church community; engaging them in all liturgical roles that do not require ordination; and employing them in church administration.

He supported peace initiatives by speaking at a 1983 rally near the Seneca Army Depot and taking an active role in development of the U.S. bishops’ 1983 pastoral letter “The Challenge of Peace: God’s Promise and Our Response.” Known for his pastoral outreach to diverse groups, Bishop Clark also urged compassion for those with HIV/AIDS in his 1988 pastoral instruction “The Lord Himself Taught Me to Have Compassion.”

Other highlights of Bishop Clark’s tenure were founding the annual Thanks Giving Appeal (now Catholic Ministries Appeal) in 1981; reconfiguring St. Bernard’s Seminary into St. Bernard’s Institute (now St. Bernard’s School of Theology and Ministry); establishing a 1993 policy for employees and volunteers to report allegations of sexual abuse of minors by clergy and deacons; and authoring the article “The Pastoral Exercise of Authority” for New Theology Review.

In accordance with church law, Bishop Clark submitted his resignation on his 75th birthday, July 15, 2012, and several weeks later Syracuse’s Bishop Robert J. Cunningham was named apostolic administrator until a successor could be named.

After completing graduate studies in Rome from 1980-83, he became vicar for administration/co-chancellor for the Providence Diocese (1983-91). In 1991-92 and also from 2000-05 he served as secretary to the apostolic nuncio in Washington, D.C.

He also served as vicar general/moderator of the curia for the Diocese of Providence (1992-97) and pastor of St. Sebastian Parish in Providence (1997-2000).

On March 3, 2005, he was appointed by Pope John Paul II as coadjutor bishop of the Diocese of Burlington. He was ordained to the episcopacy on April 19 of that year and became bishop of Burlington on Nov. 9, 2005.

Among his early acts as bishop of Rochester were discontinuing diocesan fees for the processing of annulment cases, and publishing a June 2017 pastoral letter establishing a Year of the Eucharist to emphasize the real presence of Christ in the Eucharist and to coincide with the 150th anniversary of the founding of the Diocese of Rochester.

‚Ä¢ Bishop John E. McCafferty (1968-80): He served in various diocesan parishes and administrative roles, including as rector of Sacred Heart Cathedral in 1972. He died April 29, 1980, in Rochester.

‚Ä¢ Bishop Dennis W. Hickey (1968-89): Serving under three bishops (Bishops Sheen, Hogan and Clark), he founded the Priests’ Personnel Board; directed Priest Personnel (1968-82); implemented a retirement program for priests; assisted in establishing the permanent diaconate; was pastor of St. Theodore Church in Gates before being named vicar general in 1967; and later was pastor of St. Thomas More Church in Brighton. From 1985-95, Bishop Hickey was general manager of the Catholic Courier. He died in Rochester Oct. 6, 1999.

— Sources: The Diocese of Rochester in America, 1868-1993 and Catholic Courier archives.