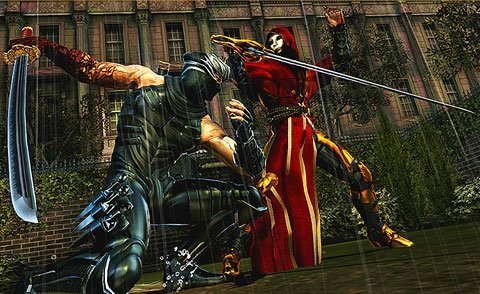 NEW YORK (CNS) — Gamers can face a dilemma when a title boasting addictive gameplay and high-quality graphics also contains content or themes that are objectionable from a Judeo-Christian standpoint. Should the player indulge in the technically impressive, yet morally deficient game, or pass it over?

No such quandary arises from "Ninja Gaiden 3" (Tecmo Koei). Not only is this latest entry in the franchise morally bankrupt, it’s also thoroughly tedious, presenting little more than a succession of look-alike bad guys to be slaughtered in the bloodiest of ways.

Its title notwithstanding, the game, far from being the third installment in the popular sword-slashing series, is in reality the 15th of its offerings. The titular number refers to the fact that it stands as the third outing of jumpy/slashy "fun" since the 2004 reboot of the franchise.

In lieu of the learned moves, character upgrades, multiple weapons and thoughtful combat that characterized some of its predecessors — and made them so popular — "Ninja Gaiden 3" subjects the player to a mix of button bashing and over-the-top gore. There’s even a mechanic that allows the gamer to cut through bone more realistically. As for such details as plot and characterization, meanwhile, the former is lame, the latter two-dimensional.

The story, such as it is, focuses on protagonist Ryu Hayabusa, a ninja empowered by the mysterious force of a "Dragon Sword," who uses his mystical weapon to destroy … well, anyone who gets in his way.

The remainder of the scenario is standard conspiratorial futuristic-fantasy fare. This involves a criminal organization-cum-corporation out to destroy everything and make a new world order in their own image. Ryu and his friends must unravel the scheme while battling evil villains with bad accents, mutants, zombies, supersized goddesses created in labs and everything else short of the kitchen sink.

One key evildoer wants to act as a god. But the strictly workaday storyline is so incomprehensible that it registers as theologically irrelevant. More offensive is the fact that the narrative makes a pathetic attempt to justify the butchery of endless streams of soldiers by having other characters assure Ryu, while he catches his breath from his latest killing spree, that he is not, in fact, a murderer.

Considering that the player is frequently forced to cut down unarmed soldiers begging for their lives (with no other option available), gamers of faith will most likely find Ryu’s efforts to reflect on what it all means unconvincing.

With a risible plot, pathetically poor gameplay, and an immoral message, "Ninja Gaiden 3" is an abject product on all levels, one that players would be well advised to avoid at all costs.

Played for review on the Xbox 360; also available on PlayStation 3.

The game contains gratuitous violence with gore, including the massacre of unarmed opponents, possible suicides, some pagan themes, fleeting rear female nudity, as well as occasional instances of profanity and of rough and crude language, The Catholic News Service classification is O — morally offensive. The Entertainment Software Rating Board rating is M — Mature.