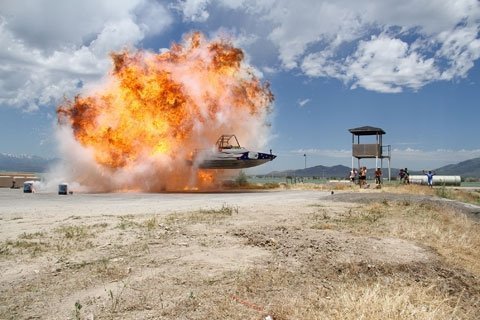 A century ago, huge crowds swarmed fairgrounds to enjoy the sight and sound of two steam locomotives colliding head-on at top speed. There was wonderful noise, a bit of danger from the flying iron and the steam, and it was an indelible sight. Everyone went home happy.

Today, with all movie stunts involving computer-generated imagery and performers on wires and cushions that are digitally erased, it’s difficult to recapture the old thrill of authentic jeopardy.

Enter the likable youths of "Nitro Circus" and their menagerie of flying stunts by dirt bikes, monster trucks and even tricked-up Big Wheels. It’s a popular series on MTV, served up without the sour cackling ethos of the "Jackass" series, which consists of stupid self-inflicted mayhem conducted mostly while intoxicated.

The tricks here are balletic in slow motion, usually involve dirt landings, and possibly are not quite as dangerous as co-directors Gregg Godfrey and Jeremy Rawle would like you to believe. Every few minutes, someone intones, "If this goes wrong, someone could get killed." Thank you, P.T. Barnum!

The performers, headed by Travis Pastrana, smile constantly and aren’t particularly witty. But they’re enjoyable company all the same.

Only one stunt — a complicated leap from a high-rise in Panama — appears to risk imminent death. The rest are in the broken-bone-and-bruises category. The vignettes lead up to a big show in Las Vegas in which the cheering throng tends to get in the way of the action.

Without the slo-mo and replays, the film’s 93 minutes would come in at half the length. But the prospect of seeing a stunt repeated four or five times is, after all, what will likely draw the targeted audience in the first place.

The film contains fleeting crass language and stunts no one should try at home. The Catholic News Service classification is A-III — adults. The Motion Picture Association of America rating is PG-13 — parents strongly cautioned. Some material may be inappropriate for children under 13.