No decisions made about parish control at St. Rita School - Catholic Courier 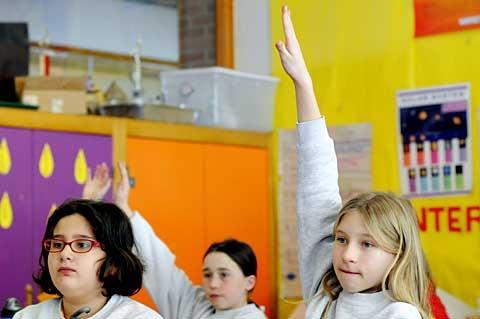 Reports in the secular media this week indicated that the diocesan-operated St. Rita School in Webster would soon revert to parish control.

In a March 16 interview with the Catholic Courier, Father Charles Latus clarified that the possibility of the parish resuming control of the school remains under study pending the results of similar changes at St. Joseph School in Penfield and St. Lawrence School in Greece.

Although they all once operated under the auspices of their affiliated parishes, Rochester-area Catholic elementary schools have been operated by the Diocese of Rochester since formation of the Monroe County Catholic Schools System in 1994.

As announced in January, St. Joseph and St. Lawrence schools will revert to operation by the parishes with which they are affiliated in time for the 2010-11 school year.

In response to media reports regarding St. Rita School, diocesan spokesman Doug Mandelaro reiterated that St. Rita and Pittsford’s St. Louis parishes are both studying the possibility of operating the schools on their campuses, as had been announced previously. No final decisions have been made, Mandelaro said.

Whether St. Rita is operated by the parish or by the diocese, it will remain strong, Father Latus said, responding to a news report that the fate of the school was up in the air.

"Never was the future of the school in doubt," he said.

And regardless of whether it ultimately reverts to parish control, St. Rita School is not "separating from the diocese," as was reported by one news outlet, Father Latus noted.

Father Latus said the school is planning a new fundraiser: a gala called the Blue and Gold Ball, which has been scheduled for 6:30 p.m. Friday, May 7, at Glendoveers, 2328 Old Browncroft Road, Penfield. The event will feature a silent auction, food, drinks and music. For details, contact the school at 585-671-3132.