No dispensation for this year's Christmas Mass on Monday - Catholic Courier 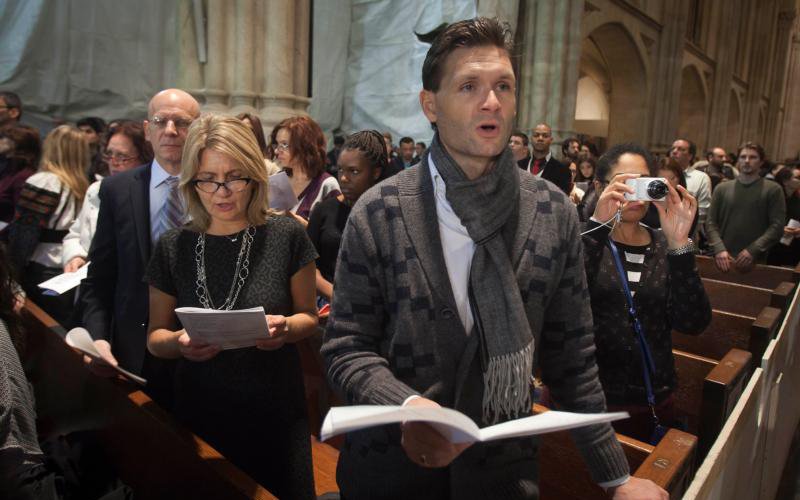 People sing carols during midnight Mass on Christmas in 2014 at St. Patrick's Cathedral in New York. A newsletter issued in February by the U.S. Conference of Catholic Bishops' Committee on Divine Worship reminded Catholics that they have the obligation to attend Mass on the fourth Sunday of Advent, Dec. 24, and on Monday, Dec. 25, which is Christmas. (CNS photo by Carlo Allegri/Reuters)

WASHINGTON (CNS) — Although Christmas this year is the day after the fourth Sunday of Advent, Catholics  looking to count a Sunday evening Mass Dec. 24 for both that Sunday obligation and Monday’s Christmas Mass obligation will have to think again.

The U.S. bishops already saw this coming at the beginning of the year and said Catholics should attend separate Masses for the two days.

A newsletter issued in February by the U.S. Conference of Catholic Bishops’ Committee on Divine Worship noted that a “two-for-one” Mass cannot occur in the very rare circumstances when two of the six holy days of obligation — the feast of the Immaculate Conception or Christmas — fall the day before or after Sunday.

“When consecutive obligations occur on Saturday-Sunday or Sunday-Monday, the faithful must attend Mass twice to fulfill two separate obligations,” the committee said.

The reason Catholics might consider the idea of receiving dispensation from a Monday Mass likely stems from the U.S. bishops’ vote in 1991 to lift the obligation to attend Mass on holy days of obligation that fall on Saturdays or Mondays. But that vote was only for three of the six holy days: the feast of Mary, Mother of God, Jan. 1; the feast of the Assumption, Aug. 15; and the feast of All Saints, Nov. 1.

This does not apply to Christmas and the feast of the Immaculate Conception, which is Dec. 8. Most dioceses have transferred observance of the feast of the Ascension from the Thursday 40 days after Easter to the following Sunday.

The committee’s newsletter offers a nuanced explanation of the required Mass attendance on holy days falling before or after Sundays, noting that a “dubium,” which is Latin for a request for clarification, about the possibility of “simultaneous fulfillment of obligations was answered in the negative by the Sacred Congregation for the Clergy and approved by Blessed Pope Paul VI in 1970.” The committee notes that this clarification was not issued as a conclusive and authoritative interpretation, but it has weight since it was backed by the Vatican and the pope.

The newsletter also points out that in the absence of a “definitive interpretation by the Holy See, attendance at the evening Mass shared by the two holy days is indeed sufficient to fulfill both obligations, ” but the caveat here is that the church’s intention in providing vigil Masses was “never envisioned as a legal loophole, and, hence, separate obligations remain.”

The divine worship committee also holds out hope that Catholics would want to go to Mass two days in a row, saying: “It would be hoped, of course, that Catholics foster a love for the sacred liturgy and hold a desire to celebrate the holy days as fully as is reasonably possible.”

There also is the tiniest amount of wiggle room. The committee acknowledges that situations arise where fulfilling Mass obligations on consecutive days is either impractical or impossible for an individual or a family and in these cases pastors can grant individual dispensations. Similarly, diocesan bishops “may examine their regional circumstances and grant general dispensations or commutations, while permitting their pastors to make judgments in individual cases,” the committee said, but such judgment calls are exceptions to the general rule.

The bishops’ committee also has looked ahead to when this will happen again. In the next 12 years, Christmas will fall either on a Saturday or a Monday four times and the feast of the Immaculate Conception will fall on either of those days three times.

Paulist Father Larry Rice, director of the University Catholic Center at the University of Texas at Austin, said he hasn’t heard anyone ask about a dispensation for the Christmas liturgy, but he suspects some will try to combine the Sunday and Monday Masses. They also might go to the Saturday evening vigil for Sunday and the Sunday vigil for Christmas, which is OK.

He said the big challenge for parishes this year will be decorating for Christmas liturgies, especially parishes with afternoon Masses on Sunday that will only have a few hours to “turn the church over from Advent to Christmas.” Another challenge will be getting volunteers to help set up churches for Christmas Eve.

Some parishes are moving up the time of their Sunday Masses on the fourth Sunday of Advent to accommodate the quick turnaround.

Father Rice told Catholic News Service the rare event of a Monday Christmas “sounds to me like an opportunity to simplify, although Christmas isn’t generally a time people are looking for that.”