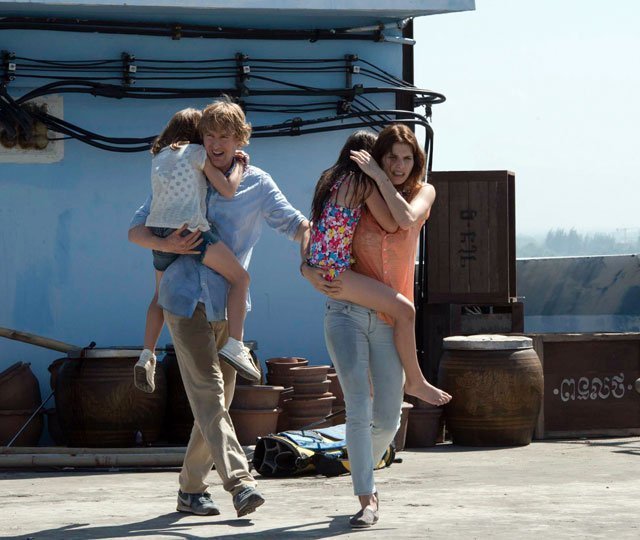 Owen Wilson and Lake Bell star in a scene from the movie "No Escape." The Catholic News Service classification is L -- limited adult audience, films whose problematic content many adults would find troubling. The Motion Picture Association of America rating is R -- restricted. Under 17 requires accompanying parent or adult guardian.
By John Mulderig
Catholic News Service
NEW YORK (CNS) — There’s a reason most action films center on hard-boiled characters who know how to look out for themselves. Ordinary folk — be they accountants, dentists or that emo barista at the local high-end coffee spot who always spells your name wrong — are unlikely to flourish in the usual circumstances confronting a James Bond or a Jason Bourne.
So, while the people behind the grueling adventure "No Escape" (Weinstein), led by director and co-writer John Erick Dowdle, can be honored for trying to stretch genre boundaries by plunking an everyday family down in the midst of violent turmoil, their effort is doomed from the start.
The outcome of their experiment may be strengthened emotional bonds on screen. Yet down in the audience, their tinkering is likely to garner a harvest of winces based on moviegoers’ discomfort at seeing the innocent and the vulnerable suffer.
The endangered clan in question consists of expatriate businessman Jack Dwyer (Owen Wilson), his wife Annie (Lake Bell) and their two young daughters, Lucy (Sterling Jerins) and Beeze (Claire Geare). No sooner have the Dwyers arrived in the Thailand-like country where Jack is about to start a new job than a coup breaks out.
Normally, of course, that would be a matter for the locals to sort through, while protected tourists and foreign residents watched from afar. Unfortunately for the Dwyers, this particular uprising is fueled by murderous anti-American rage, and the hotel where they’re temporarily staying soon becomes a killing ground.
Forced to flee into the teeming, unfamiliar urban landscape beyond the besieged hostelry, the foursome benefits from the help of a British-born chance acquaintance named Hammond (Pierce Brosnan).
A veteran traveler whom the Dwyers first connected during their long flight from the States, Hammond, unlike his newfound friends, knows the lay of the land quite well. Better yet, for reasons that only become fully apparent later, he also boasts a set of well-honed combat abilities.
Dowdle’s script — penned in collaboration with his brother Drew — covers some predictable moral territory. Jack rises to the challenging occasion by resourcefully protecting his spouse and children. Yet he’s troubled by some of the brutal measures to which he’s forced to resort.
Partly, no doubt, to keep the proceedings from becoming too saturated in machismo, Annie turns out to be a doughty warrior herself. And the extreme danger the couple faces only serves to reinforce their slightly frayed marital ties. Thus, during a pause in their fraught odyssey, Annie acknowledges that the rewards of her current family life far outweigh the loss of the more self-centered dreams she cherished in youth.
Yet the unsettling experience of following the Dwyers’ escape effort remains. It’s one thing to watch Tom Cruise’s Ethan Hunt make his way across the perilous no-man’s-land fringing the Berlin Wall in "Mission: Impossible — Rogue Nation."
However, quite different feelings are aroused by the plight of the trapped Dwyers as, with fanatical gunmen slaughtering their fellow guest, they steel themselves to jump from the roof of their hotel to the top of a neighboring building — or, in the case of the girls, to be thrown across the yawning gap that separates the two structures. The situation is certainly dramatic and potentially tragic. But is it the stuff of adventure?
The political subtext is equally troublesome. Virtually all of the Asians in "No Escape" come across as inhuman marauding savages. Yet this blatant smear represents an indispensable element of the Dowdles’ flawed premise, which requires the depraved natives to prey relentlessly on their European and American victims.
To paper all this over, the dialogue includes an unconvincing political lecture portraying the whole situation as an unfortunate — but understandable — reaction to the injustices wrought by globalization.
The film contains frequent harsh and sometimes gory violence, emotionally wrenching situations, including a rape scene with partial nudity, a couple of uses of profanity and about a dozen instances each of rough and crude language. The Catholic News Service classification is L — limited adult audience, films whose problematic content many adults would find troubling. The Motion Picture Association of America rating is R — restricted. Under 17 requires accompanying parent or adult guardian.
– – –
Mulderig is on the staff of Catholic News Service.
Copyright © 2022 Catholic News Service, Inc. All rights reserved. Linking is encouraged, but republishing or redistributing, including by framing or similar means, without the publisher's prior written permission is prohibited.