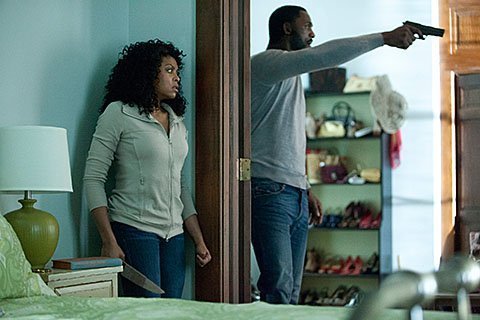 Taraji B. Henson and Idris Elba star in a scene from the movie "No Good Deed." The Catholic News Service classification is A-III -- adults. The Motion Picture Association of America rating is PG-13 -- parents strongly cautioned. Some material may be inappropriate for children under 13.

NEW YORK (CNS) — Were it not for the disturbing parallel with recent domestic violence cases involving professional athletes, "No Good Deed" (Screen Gems) would have no reason to attract attention.

It’s a conventionally plotted thriller about a violent escaped convict who terrifies a household. Its late story "twist" is easily detected early on, leaving the film, directed by Sam Miller and written by Aimee Lagos, as stale and predictable as its dark and stormy night.

As it opens, Colin (Idris Elba), convicted of one murder but a suspect in five others, is denied parole in Tennessee. On the trip back to prison, he kills two guards and heads to the Atlanta home of his unfaithful ex-fiancee (Kate del Castillo) with murderous intent.

He wrecks his vehicle on a rain-slicked highway during his getaway, and ends up ringing the doorbell at the home of Terri (Taraji B. Henson), her husband, Jeffrey (Henry Simmons), and their two small children.

Jeffrey has escaped husbandly tasks for what he calls a "golfing trip," leaving Terri alone with the children before she takes pity on the soggy killing machine who asks to use her phone to call a tow truck. As a former prosecutor who specialized in domestic violence cases, she ought to know better, of course.

What could possibly go wrong here, even with chirpy neighbor Meg (Leslie Bibb) dropping by?

Colin, in the manner of all abusers, alternates between predatory and protective behavior, but the film teaches no lessons in how to cope with any of it. Instead, there’s only a string of bleak killings set in a distasteful framework.

The film contains gun and physical violence, frequent rough and crass language and fleeting profanities. The Catholic News Service classification is A-III — adults. The Motion Picture Association of America rating is PG-13 — parents strongly cautioned. Some material may be inappropriate for children under 13.