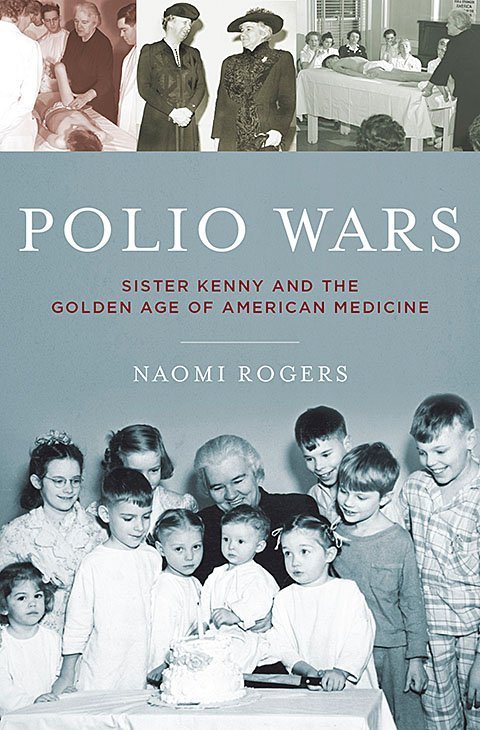 "Polio Wars" tells the true story of "Sister" Elizabeth Kenny who came up with new treatments for polio in the 1940s that went against standard practice.

"Polio Wars" tells the story of the conflict between the medical establishment and "Sister" Elizabeth Kenny, who came to the United States from Australia in the early 1940s with a new idea for treating polio patients that flew in the face of standard practice at that time. Neither an accredited nurse nor a member of a religious order, Kenny received the title "sister" because of her status in Australia as a senior nurse.

Kenny quickly became a media sensation and her life story was made into a film starring Rosalind Russell. But the development of the polio vaccine in the 1950s made Kenny’s work irrelevant and she was quickly forgotten.

Born in 1880, the fifth child of nine of an itinerant farmworker, Elizabeth and her family moved constantly between New South Wales and Queensland during her childhood. While her sisters ended up marrying local farmers, Elizabeth had no interest in domestic life. She lived for a time with a physician and his wife while recovering from a sprained wrist. From them she learned both anatomy and physiology informally. Determined from a young age that she wanted to work with the sick, Elizabeth set up a clinic in Nobby, a remote town about 100 miles from Brisbane in 1911. She built it from her own earnings from selling produce.

Having never seen polio before an epidemic broke out in Australia, she started treating it by applying hot packs and exercising the limbs and muscles and found it relieved much of the pain of the disease. In the early years she largely saw patients well beyond the early stages of polio, who had been thought untreatable and fitted for braces. She had patients take off the splints and stomach corsets and full body casts that left patients immobilized for months or years and bid them to exercise their muscles. Patients for the first time participated in their own treatment. She used hot and cold water sprays, manual manipulation of muscles and other techniques that contradicted the standard medical procedure of splintering limbs and immobilizing patients.

Kenny was, of course, beloved by patients and their families, and she even had doctors who supported her claims. But the medical worlds in both Australia and England viewed Kenny as an unqualified, undereducated quack who only had clinical experience and whose conclusions could not be tested or measured. The difficulty in setting up a true clinical trial meant some children suffering from polio would receive her treatments and the others would not, thus creating a moral dilemma for which there was no easy solution. She came to America expecting that its reputation for supporting innovation would give her the acceptance by physicians she craved.

While Kenny enjoyed her fame with the public, she never succeeded at getting the unqualified stamp of approval of the medical establishment. However, her treatments had been accepted in practice almost universally. But, to her, this was second-tier success. She was not interested in her treatment being one of an array of ways to combat polio, but the only way. She wanted her definition of polio and her terminology to be adopted as the standard definition and language to describe the disease. To that end she eventually created her own foundation, testified before Congress, wrote books and made films. She died Nov. 30, 1952, disappointed and frustrated.

Subtitled "Sister Kenny and the Golden Age of Medicine," "Polio Wars" does not seem to be about what anyone would think of as a "golden age" of medicine since it offers a portrait of the medical world as unrelentingly snobbish, arrogant and sexist. Kenny does not come off much better as she is portrayed as egoistical, hypocritical and unforgiving. Author Naomi Rogers, an associate professor of the history of science at Yale University, doesn’t seem to like either side of this "war," but she tells a fascinating story.

Yearley is a graduate of the Ecumenical Institute at St. Mary’s Seminary and University in Baltimore.