'Nobody should be buried alone' - Catholic Courier 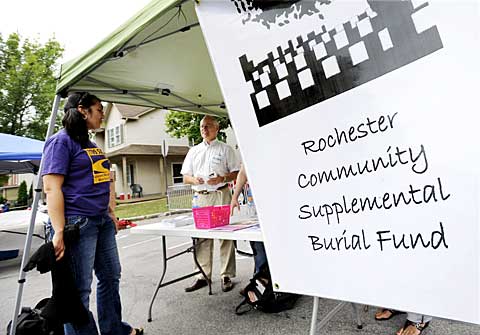 During a community event in Rochester in 2010, Marvin Mich (center)spreads the word about a fund that aims to help the poor with burial.

EDITOR’S NOTE: The following series of articles illustrate how Catholic Charities agencies throughout the 12-county Diocese of Rochester respond to the call to carry out the corporal works of mercy, especially during this Jubilee Year of Mercy. The corporal works of mercy are: feed the hungry, give drink to the thirsty, clothe the naked, shelter the homeless, visit the sick, visit the imprisoned and bury the dead.

For the past five years, the Greater Rochester Community of Churches, which includes participation by Catholic Family Center staff, has been working to ensure that mourners are present at burials of residents with no family or resources.

"Nobody should be buried alone," said Sister of St. Joseph Beth LeValley, a past president of the organization and its current vice president of social justice.

Sister LeValley works with Monroe County officials to obtain the names of residents who have died with no known next of kin to arrange funeral services. A group of volunteers then assists her in arranging graveside services and attends these funerals, which are most often held at Oakta and Riverside cemeteries in Rochester, she added.

The mercy of God is present when estranged family members show up at these services, Sister LeValley said.

She said a deceased woman’s sister recently explained how the siblings had gone their separate ways. But just before being informed of the funeral service, the woman had found a photo of her and her sister.

"Another man (who had died) had been totally estranged from his family," she said, adding that the brother could not have been more grateful for this ministry.

"His brother came and thanked me profusely," she added.

Sister LeValley’s pastoral ministry of burying the dead, which includes an annual memorial Mass, evolved out of advocacy work by the GRCC and other community activities to increase funding for indigent burials, an effort that began a decade ago.

A group called Citizens for a Dignified Burial formed in 2006 when Monroe County cut payments to cover the funeral and burial expenses of the indigent from $1,850 to $1,250, as reported in a Sept. 10, 2010, Catholic Courier article. As a result of the funding cut, many families were forced to choose cremation because they could not afford burial. Yet, local activists have said that cremation goes against the faith traditions of some ethnic communities — including Hispanics, African-Americans and Native Americas. Cremation of Catholics was prohibited until the issuance of the Revised Code of Canon Law in 1983.

While the group was unsuccessful in its efforts to get Monroe County to reverse its policy, the county did hire a burial coordinator to work with families on a case-by-case basis. The county’s burial-assistance program now falls under the office of faith-based initiatives, Sister LeValley noted.

However, the GRCC was successful in creating the Rochester Community Supplemental Burial Fund and raised about $17,000 to help families that didn’t want to have their loved ones cremated, explained Marvin Mich, director of social policy and research for Catholic Family Center and a past GRCC president. When GRCC wasn’t able to sustain the amount of fundraising required to maintain the fund, the remaining funds eventually were transferred to the county to distribute to families as needed.

Mich said a need still exists in the community for funds to provide burial alternatives for indigent families. He noted that Sister of Mercy Grace Miller has taken up the baton of advocating for burial funding through her ministry, the House of Mercy.