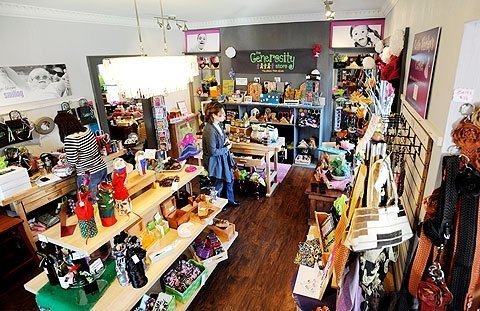 The Generosity Store on South Goodman Street in Rochester is a non-profit gift shop that benefits School of the Holy Childhood and Golisano Children's Hospital.

For years, school officials at School of the Holy Childhood in Henrietta talked about opening a retail location.

But the amount of time, money and effort required to launch a store kept that idea from getting off the ground, said Kelly Hallenbeck, public relations and brand manager of the school, an agency that serves children and adults with developmental disabilities.

Enter Dan and Karen Lynch. They took a tour of School of Holy Childhood about a year ago, and the Generosity Store was born not long after.

The Lynches were at the school to celebrate a Mass for Dan’s mother, who had made a donation to the school every year. The Lynches were unfamiliar with the work that it did, so they asked to schedule a tour several days after the Mass. What they saw amazed them: a school that teaches developmentally disabled children skills they need for independent living, and vocational programs that include a bakery producing pies for area restaurants, and woodworking, ceramics and fiber-arts studios that make handcrafted items ranging from clocks to shelves and placemats to ornaments.

Yet they were struck by how the items were only available several times a year at craft sales.

"Dan was like, ‘How about if we see if the organization would allow us to open up a gift shop. Would you like to quit your job at the Children’s Hospital?’" recalled Karen Lynch, who at the time was the associate director of development at Golisano Children’s Hospital at Strong.

Although Karen Lynch officially stepped down from her job at the hospital in order to become president and CEO of The Generosity Store, she has been able to continue supporting the hospital through the store, which is a nonprofit organization that splits proceeds between School of the Holy Childhood and Golisano Children’s Hospital.

Four months later, the Lynches signed the lease for the store at 39 S. Goodman St. in Rochester, which is located in the busy neighborhood near the intersection of Monroe Avenue. In August of 2011, the store celebrated its grand opening during the Park Avenue Festival.

"They basically came to us with this idea and it was incredible," Hallenbeck said. "We had needed a retail outlet for some of the items we sell, and this is perfect."

The store features items that originate from School of the Holy Childhood’s workshops and ones bearing the logo of Golisano Children’s Hospital at Strong in Rochester. The shop also features items being sold as fundraisers for other charities, such as Rochester Press Radio Club calendars, restaurant gift certificates benefitting Bivona Child Advocacy Center, and jewelry that benefits Daystar, a Sisters of St. Joseph ministry that offers child care for medically fragile infants. Although School of the Holy Childhood is a nondenominational nonprofit, it was founded by a Sister of St. Joseph and has been supported for years by the order as well as the School Sisters of Notre Dame.

The Lynches also have donated time and money to the school as they were developing the store, Hallenbeck said. The shop has already given thousands to School of the Holy Childhood by purchasing inventory up front and plans to continue its giving as business grows, Karen Lynch said.

One of the goals of the store is to keep its prices low by minimizing its overhead. Volunteers and a few paid part-time employees staff the store, which helps to keep costs down.

"We’ve gotten so much feedback and a lot of repeat customers because of our prices," Karen Lynch said. "A big difference with a for-profit gift shop is that (a for-profit store) has so many expenses."

Although many of the items are handmade, the store has balanced out those items with some purchased articles in order to provide a complete range of gift-shop products, she said. The organization’s board of directors make decisions on which organizations to partner with. Additionally, they weigh in on a case-by-case basis on whether to sell new items made by local artisans.

"We already feel like we are bursting at the seams here," Karen Lynch said.

Even though the store has been open for less than a year, it already has a legion of dedicated fans, including Maria Carrone of Chili, who said she found out about the Generosity Store because her two children go to School of the Holy Childhood and her family attends medical appointments at Golisano Children’s Hospital at Strong. Her family helped set up for the grand opening and several events at the store.

"Karen and Dan’s generosity has given Holy Childhood and Golisano another outlet in the community to recognize what our adults can accomplish," Carrone said.

She noted that one of the store’s benefits is that it raises the profile of the school in the community, and noted that it also offers adults from the school a chance to get experience working at a retail outlet.

The partnership between the store, hospital and school has been a win-win situation for all, Karen Lynch said.