Norm of the North - Catholic Courier 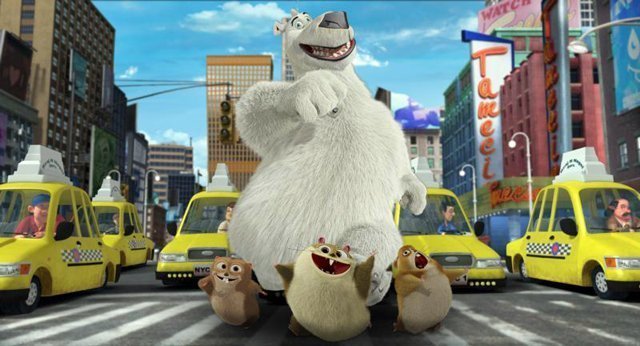 Norm, voiced by Rob Schneider, and other animated characters, appear in the movie "Norm of the North." The Catholic News Service classification is A-I -- general patronage. The Motion Picture Association of America rating is PG -- parental guidance suggested. Some material may not be suitable for children.

NEW YORK (CNS) — A wisecracking polar bear ventures south to save his homeenvironment from destruction in "Norm of the North" (Lionsgate).

Though suitable for all ages, this animated comedy is unlikely to make much of animpression — either on targeted kids or on the long-suffering adults whoaccompany them.

The eponymous creature (voice of Rob Schneider) suffers from a kind of "Rudolph theRed-Nosed Reindeer" syndrome: He just doesn’t fit in with his ursine peers. Hedislikes hunting seals for dinner, and would rather disco dance than growl atthe gawking tourists on visiting cruise ships.

"I put the soul into solstice," he brags, twirling in the snow.

Norm isdifferent in another way: He can "talk human," a gift shared only by hisGrandpa (voice of Colm Meaney), the species’ former sovereign.

"Polar bears are the icons of the north," Grandpa intones. "An icon with a voice canbe very powerful indeed."

Norm learns that lesson for himself when a maniacal developer named Mr. Greene(voice of Ken Jeong) decides to build luxury houses on the polar ice shelf,threatening the ecosystem and the bears’ way of life. Greene’s assistant, Vera(voice of Heather Graham), is a reluctant participant in his scheme.

The mogul must be stopped at the source, and only a bear able to speak the lingocan do the job. Since Grandpa has mysteriously vanished, Norm is persuaded bythe resident sage, a seagull named Socrates (voice of Bill Nighy), to hitch aride to Manhattan and visit Mr. Greene’s high-rise headquarters.

He’s accompanied by a trio of lemmings, the Arctic’s smallest creatures. Like Scrat,the saber-toothed squirrel in the "Ice Age" films, these voiceless but cuddlystooges get into all sorts of mischief. In a misguided bid for giggles, theyalso relieve themselves in public as frequently as possible.

Havin greached the Big Apple, Norm makes an ally of Vera and of her precociousdaughter, Olympia (voice of Maya Kay). Young Olympia heavy-handedly schools thebear — and thus the audience — in the wickedness of corporate greed and itsimpact on our fragile planet.

Overall,"Norm of the North" is silly and rather tedious. Yet, in less time than ittakes the picture’s protagonist to shout, "Holy icicle!" all memory of themovie will probably have dissipated — like a morning mist over frozen tundra.

The film contains mild cartoonish violence, some bathroom humor, and a bit of adultwordplay. The Catholic News Service classification is A-I — general patronage.The Motion Picture Association of America rating is PG — parental guidancesuggested. Some material may not be suitable for children.

"Norm of the North" (Lionsgate)

A wisecrackingpolar bear (voice of Rob Schneider) ventures south to New York City to save hishome environment from destruction in this silly but harmless animated comedydirected by Trevor Wall. As he goes up against a maniacal developer (voiced byKen Jeong) who’s out to build luxury housing on the Arctic ice shelf, the upbeatursine wins the support of the mogul’s assistant (voice of Heather Graham) andof her precocious daughter (voice of Maya Kay). While his adventures aresuitable for all ages, and incorporate positive messages about family andfriendship, merely average visuals, heavy-handed homilies about the need to gogreen as well as an excessive reliance on scatological jokes — a trio ofmischievous lemmings relieve themselves in public at every opportunity –combine for a rather tedious outing. Mild cartoonish violence, some bathroomhumor, a bit of adult wordplay. The Catholic News Service classification is A-I– general patronage. The Motion Picture Association of America rating is PG– parental guidance suggested. Some material may not be suitable for children.